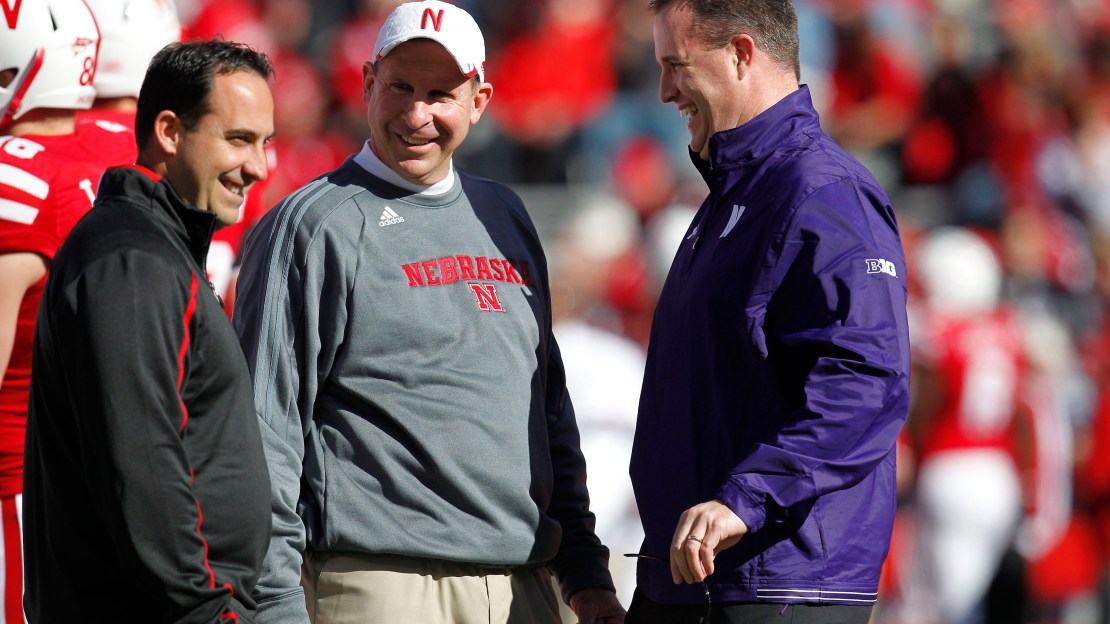 Here is a nice midseason football report from Teddy Greenstein of the Chicago Tribune. One thing is clear: There?s no shortage of good running backs. The "cloud of dust" league-as Greenstein calls it–has three of the nation's top four rushers, with Indiana's Tevin Coleman leading the charge at 176.7 yards per game.

Wisconsin's Melvin Gordon is second at 174.3, Nebraska's Ameer Abdullah averages 146.3 and Minnesota's David Cobb is cranking out 136.5 per. Somewhere, Bo and Woody are smiling.

Coming out of high school, Michigan State QB Connor Cook wasn?t offered a scholarship by this week?s foe, Indiana, where his dad played. But, the Cleveland-area native says he?s not sore.

Michigan State defensive coordinator Pat Narduzzi was Cook's primary recruiter and quickly told Mark Dantonio that Cook was worth a scholarship. Yep, he sure was. Four years later, some NFL draft analysts are projecting that Cook might ultimately be worth a first-round pick.

Penn State has a number of issues to deal with on its bye week. One is to improve the punting. That would help out a struggling offense and improve field position, which often hasn?t been good.

Chris Gulla, the Lions' primary punter, is averaging just 37.3 yards on 24 attempts. He struggled to get distance and height on his kicks against the Wolverines, averaging 33.4 yards on five attempts.

To help a depleted roster, Penn State may look to add a few JC transfers in the spring.

And here is an interesting fact: Fruechte is the only wide receiver on the Gophers roster who has caught passes from four different quarterbacks during his career. First it was MarQueis Gray, and then Max Shortell and Philip Nelson in 2012. Then Mitch Leidner last season.

How big is Iowa?s trip to Maryland? Well, Rick Brown of HawkCentral.com thinks beating the Terps is key to the Hawkeyes? title hopes. And, he?s correct.

A win in College Park could set up a de facto Big Ten West title game vs. visiting Nebraska on Black Friday. How sweet would that be? A victory on Saturday also means a 3-0 Big Ten start for Iowa for the first time since Iowa's Orange Bowl season of 2009. Beat Maryland, then take care of business at home - and it doesn't matter what Nebraska and Wisconsin (both 1-1 in the Big Ten) do.

"Life has definitely changed," Barrett said. "First day of classes, teacher calls your name to see if you're here, and everybody turns and looks back, like, 'J.T.'s in class?'

"Things like that. Around campus, walking to class, and they'll be like, 'Hey, J.T., what's up?' And I'll be like, 'S'up man.' So it's different. But I try to tell them all, I try to talk to them, and be like, 'Man, I'm just a normal person, just playing quarterback at Ohio State.'

"I'm not anybody special. I don't try to be a celebrity. Normal guy."

In case you hadn?t noticed, Rutgers DT Darius Hamilton has become a complete player this year now that he has become a good pass rusher.

"Probably the biggest difference from last year to this year is his ability to do that," Flood said. "In an age of specialization in all sports, and even within the teams themselves, there are not a lot of three-down defensive linemen that you see out there. But he is definitely one of them."

The Michigan hoop team has some issues to address. One of them is the frontcourt. Who will step up?

Ricky Doyle and Mark Donnal look to be coming on with Jordan Morgan and Jon Horford gone after splitting 33.9 minutes per game and spending most of last season without Mitch McGary. The two combined for 10.2 points on 64.0 percent shooting and 9.2 rebounds in 33.9 minutes per game at the forward position. Now all three are gone.