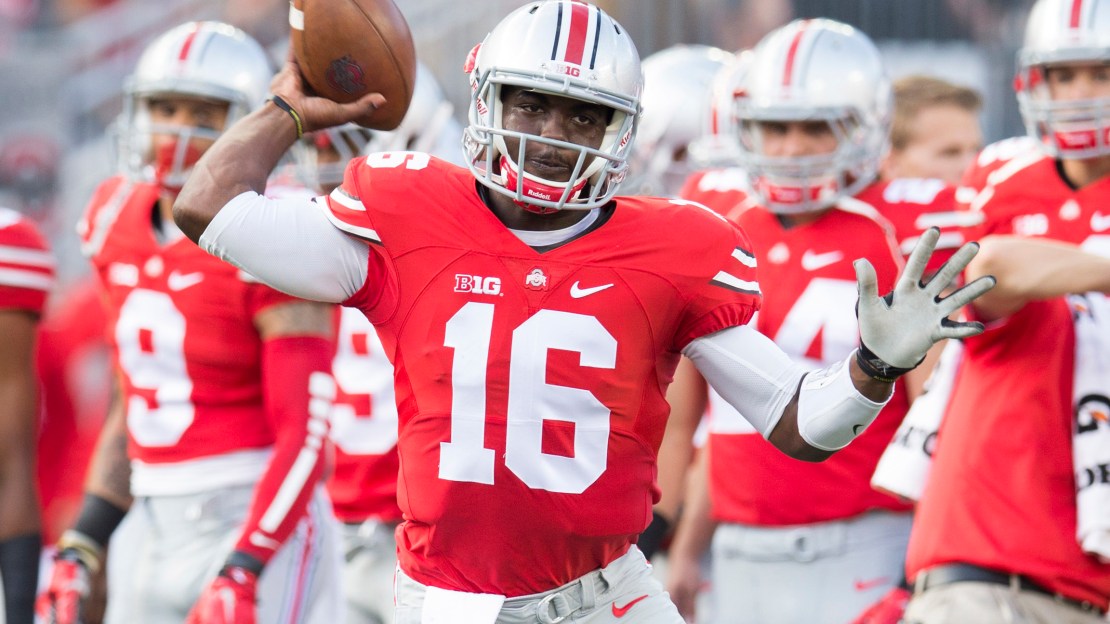 Opinions? Analysis? Facts? Here's a look at some interesting subjects with Week 8 on our doorstep. This is Fourth And Long.

Anyone else notice how Michigan State RB Jeremy Langford is coming on? The senior failed to eclipse the 100-yard rushing mark each of the first three games coming off a 1,422-yard rushing season in 2013 with 18 touchdowns. But Langford has kicked it up, running for over 100 yards in each of the last three games to give him 555 yards for the season. He needs to keep it up as the sledding gets tougher in the second half of the season.

Is Ohio State playing better than any Big Ten team at this very moment? Some people think so, but I still lean toward Michigan State. Yes, the Spartans had fourth-quarter hiccups vs. Nebraska and at Purdue the last two times out. The MSU offense hasn?t scored a point in the last two fourth quarters. Nonetheless, the Spartans still won both games. And when it comes to comparisons to Ohio State, I think MSU has an edge at quarterback, receiver and running back. The o-line is a push. Defensively, the Spartans have the edge at all three levels-but the secondary needs to get things sorted out at safety. So, please stop with saying OSU is playing better.

It has been fun watching Rutgers open with a 5-1 record. And the Scarlet Knights could be 6-0 if not for a 13-10 last-second home loss to Penn State. But the second half of the season will provide a sharper image of Rutgers. Does any team face a more daunting final six games? No. Check it out: at Ohio State; at Nebraska; Wisconsin; Indiana; at Michigan State; at Maryland. If Rutgers can split those, it would be a big accomplishment.

It?s early, but have you thought of how difficult it will be to pick the top two defensive ends for the all-conference team? Check out some of the top candidates: Michigan State?s Shilique Calhoun; Nebraska?s Randy Gregory; Ohio State?s Joey Bosa; Rutgers Kemoko Turay; Iowa?s Drew Ott.

I?ll go ahead and say it: If Northwestern beats visiting Nebraska, it will have a good shot to win the West. The Wildcats (2-1 Big Ten) are off after the visit from the Huskers. Then Northwestern finishes at Iowa, vs. Michigan; at Purdue; vs. Illinois. There?s a non-league game vs. Notre Dame mixed in. There?s a chance NU could win all of those remaining Big Ten games if it gets by Nebraska.

Can Rutgers win at Ohio State? It?ll be difficult. But I think the Scarlet Knights will be the toughest test yet for the Buckeyes. A big key for RU making a push will be QB Gary Nova. Since that PSU loss, Nova has completed 47-of-74 passes for 846 yards with seven touchdowns and just one interception. Also, the Scarlet Knights? rugged d-line needs to mute the OSU run game and get after J.T. Barrett. This could be an interesting game … maybe.

Some people ask me if Purdue has a shot at a bowl. For the Boilermakers (3-4 overall; 1-2 Big Ten) to make it to the postseason, they probably need to win at Minnesota on Saturday. That would mean Purdue would need to win two of its last four games to get to six victories: at Nebraska; Wisconsin; Northwestern; at Indiana. It is possible-but it?ll be difficult.

The quarterback spot has been interesting in the Big Ten. With Indiana set to start its second QB this season, six schools now will have started two different signal-callers. The only schools to start the same quarterback each game will have been Nebraska (Tommy Armstrong); Northwestern (Trevor Siemian); Michigan State (Connor Cook); Ohio State (J.T. Barrett); Penn State (Christian Hackenberg) and Rutgers (Gary Nova).

Still trying to get a grip on Maryland. How good is this team? This week?s visit from Iowa is huge, as the Terps need to rebound from a tough 52-24 home loss to Ohio State and protect their turf to show that they can be a factor in the East. Trips to Wisconsin and Penn State and a visit from Michigan State follow the Hawkeyes? visit.

Illinois is off this week. Seems like a good time to think long and hard about maybe starting Aaron Bailey at quarterback. What does Illinois have to lose? Exactly. Bailey saw some action last week, hitting 2-of-5 passes for 39 yards with a pick. And he led the team with 75 yards rushing in the loss at Wisconsin. Bailey may not be a polished passer, but his overall skills give this offense a big-play dimension that Reilly O?Toole lacks.