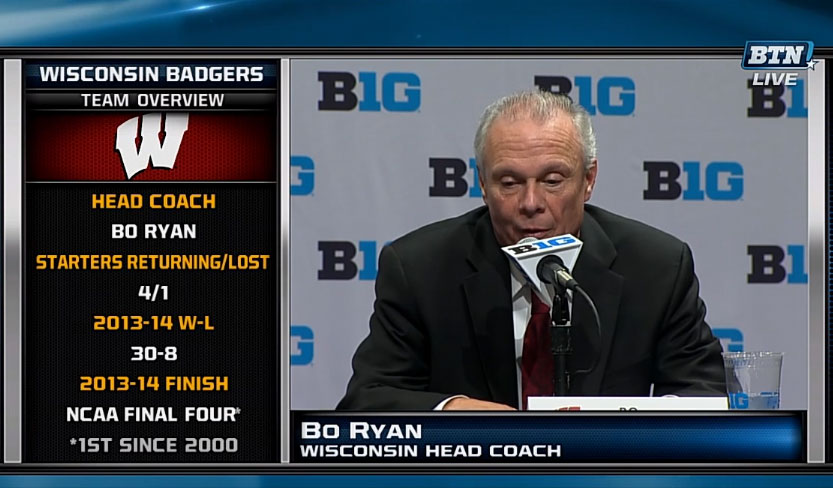 A topic of conversation at Big Ten Media Day was the new scheduling format, which was necessitated with the additions of Maryland and Rutgers to make the Big Ten a 14-team league.

?I think with where we are right now and adding obviously Rutgers and Maryland as members 13 and 14, yeah, I think it makes sense,? said Illinois coach John Groce. ?Obviously in a perfect world, I think everyone would love a round-robin where you play everybody home and away, but at this juncture, I think it's wise. I've got no problem with the schedule and the way that it's done in the climate of college basketball right now for us to play 18 games.?

But has the schedule been water-down and devalued?

?I don't know if it's being devalued because there's still 18 games and 18 tough ones,? said Maryland coach Mark Turgeon. ?Obviously everybody plays a different schedule. It's almost impossible with so many teams to put the schedule together. I think the Big Ten did a nice job with the three-year cycle that they're going to have. It is what it is.

"You look at your 18 games, you do the best you can, and some year you might get lucky and have a little bit easier schedule, and some years you might have a tougher schedule," Turgeon added. "But you won't know until you play the game. Sometimes it looks on paper like it's going to be tough, and it might not be, and sometimes on paper what looks like it's not going to be tough, it's tougher than you think.?

As for the rest of Media Day, BTN.com's Tom Dienhart, Brent Yarina and Sean Merriman covered the event and are posting reports to BTN.com throughout the day. You can follow each of our BTN.com reporters on Twitter, too:

Below you'll find the individual men's coach's sessions with the media. We posted them shortly after each one ended.

What can you expect from @IowaHoops in 2014-2015? Fran McCaffery talks about it at #B1GMediaDay. http://t.co/QLOpgjlmu8

How will @HuskerHoops build upon last season's NCAA Tournament berth? @CoachMiles talks about it at #B1GMediaDay. http://t.co/OeidaiqyKM

What can you expect from @NUMensBBall in 2014-2015? Coach Collins talked about it at #B1GMediaDay. http://t.co/GkNkWx9PcS

What can you expect from @OhioStateHoops in 2014-2015? Coach Matta talked about it at #B1GMediaDay. http://t.co/igarbc4vQi

What can you expect from @BoilerBall in 2014-2015? Coach Painter talked about it at #B1GMediaDay. http://t.co/gpq56HWYbg

What can you expect from @RutgersMBB in their first B1G season? Coach Jordan talked about it at #B1GMediaDay. http://t.co/qbAMCvvQiD

How will @BadgerMBB build upon last season's Final Four appearance? Coach Ryan talked about it at #B1GMediaDay. http://t.co/fHHF9S0FJ1

Also online, we're posting pictures from our various social media accounts, including the Instagram account for the Big Ten Network. And below is a stream of tweets and Instagram photos from a variety of Big Ten accounts at media day.

Over the past months BTN's Stephen Bardo has conducted a series of podcasts with Big Ten basketball names. Listen to any of them below.