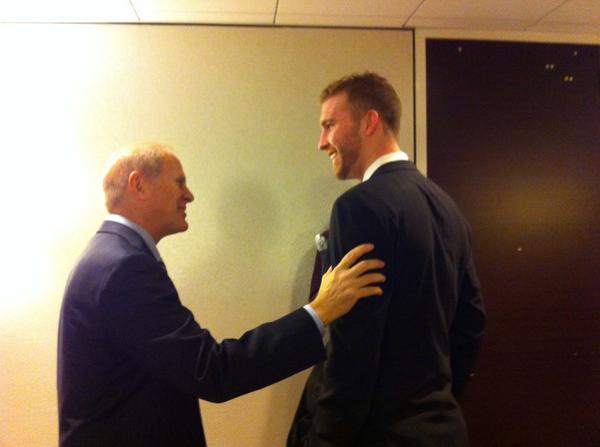 Big Ten basketball media day is in the books. There was no shortage of fun and entertaining moments Thursday at the Hyatt Regency O'Hare, and I was lucky enough to be in the right place at the right time for several instances.

[ MORE: Get all of our Big Ten men's hoops media day coverage ]

Here are my top moments, in no particular order:

Ohio State guard Shannon Scott was the first player I talked to Thursday. He shared a table with teammate and high-flyer Sam Thompson. As I was talking to Scott, I noticed Thompson doodling on a piece a paper. A minute later, he pushed the pad of paper in Scott's direction, saying, "Look at it!"

This was the sketch.

This is awesome: @OhioStateHoops Sam Thompson drew, and autographed, this while I talked to Shannon Scott. pic.twitter.com/XMrutsobcb

Big Ten fans don't need to be reminded that Maryland's Evan Smotrycz started his career at Michigan. That's been talked about plenty. However, it was great to see John Beilein cross paths with his former player in the hallway. Beilein asked Smotrycz about his family, his major and told him that he's followed his career. The two also talked about the lone Michigan-Maryland game this season, which will be Saturday, Feb. 28 at Maryland.

Yes, yes, Tim Miles is the coach who tweets about his team at halftime of every game. He's also a jokester, which shouldn't surprise anyone. Early in the day, Miles spotted Bo Ryan conducting an interview, and he just had to snap a picture. Later in the day, he had some fun with Minnesota coach Richard Pitino. Pitino, fresh off completing his interview commitments, told Miles he filled the reporters full of "coach talk", to which Miles joked, "You're an embarrassment to the profession!"

Ready for this? So, Wisconsin's Frank Kaminsky is dressing up as Nebraska's Terran Petteway for Halloween and Nebraska's Walter Pitchford is going as Kaminsky. Got that? There's a reason for all of this. Kaminksy and Petteway have become good friends since playing together at a recent Adidas camp in Los Angeles. In fact, they went to dinner Wednesday night and shared a laugh at breakfast Thursday. Fact is, Kaminsky is a "huge" Petteway fan and is "fascinated" by his hair. He said he will be buying a wig and purchasing a Petteway jersey from the Nebraska online store.

As for Pitchford going as Kaminsky, well, he had to get the Wisconsin big man back. Kaminsky loved hearing Pitchford was dressing up as him, saying, "No, that's not possible. What an honor!"

This just in: Walter Pitchford is going as Frank Kaminsky for Halloween. Why? "Because he's going as Terran (Petteway)."

Fran McCaffery does a PSA for BTN at Big Ten Media Day in Chicago. #Hawkeyes pic.twitter.com/ORKSiabSO0

Behind the scenes in the @BTNJourney room with @MSU_Basketball coach Tom Izzo. #Spartans pic.twitter.com/8013Mtyym2

@AndreHollins is checking his portfolio on the way back from Big Ten media day. pic.twitter.com/YBhQf70F8r