Kevonte Martin-Manley Q&A: 'We have a vareity of guys who can do everything' 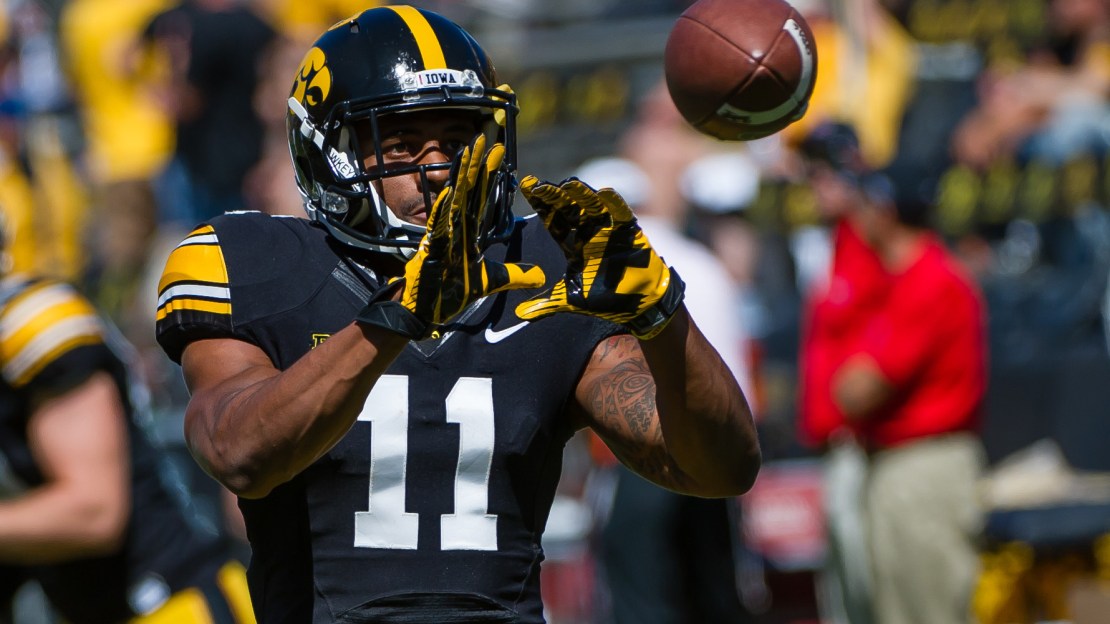 The Iowa offense seems to be gaining traction at just the right time, with the Big Ten season heating up. And wideout Kevonte Martin-Manley is part of that rise for a 5-1 Hawkeyes squad that?s atop the West Division with a 2-0 conference mark.

But more big plays are needed for an offense that has struggled for consistency. I caught up with Martin-Manley as he prepped to play a big game at Maryland this Saturday.

Q: Have you been pleased with the development of the offense?

A: I think it?s developing well. We struggled a bit in the beginning, not putting up as many points as we expected. But we have been playing better and finishing in the red zone with touchdowns.

Q: Why do you think the offense struggled to run the ball early in the season?

A: It was little details, all 11 guys not being on the same page on every play. We have been watching film and are very detailed to fix those things.

Q: Break down your receiving corps.

A: What I like about our group is we have a variety of guys who can do everything. We have deep threats, our speedsters, we have some big guys with physicality, guys who can make plays on third down when we need them. We have a lot of variety and our guys are playing with a lot of confidence.

Q: Who has the best hands?

Q: Who is the toughest?

Q: Any young guys who have caught your eye?

A: Derrick Willies is one. He?s a very talented receiver, a freshman. He was banged up a little last week, but he is a guy who can make a lot of plays. He?s very talented. Keep an eye on him.

Q: Has the two-quarterback system been a distraction?

A: We are just going by whatever coach wants to do. Whoever has the hot hand, we are fine with that. It really doesn?t matter. As long as everyone is playing well and doing their job, it doesn?t really matter who is at quarterback.

Q: Is there one guy whose ball you like to catch more than the other-Jake Rudock or C.J. Beathard?

A: Not really. I don?t care who is throwing, it could be an offensive lineman.

Q: How big is this game at Maryland this Saturday?

A: It?s very big. The deeper we get into the season, the bigger the games get. Getting this one for our third Big Ten win would be huge in giving us some separation in the division.

Q: What was the team?s mindset after that home loss to Iowa State?

Q: You guys have won three in a row. What has been the key?

A: Playing great team football. When the offense is struggling, the defense plays great. And vice versa. Being consistent on special teams has helped, too. Just great team football with guys feeding off each other. That?s what has gotten us over the hump these last three games.

Q: Can this team win the West?

A: Yes, I think we can. It would be huge. Not just for our team, but for the future of the program. We have been working extremely hard the last few years trying to improve each day. If we get there, it wouldn?t surprise us because we have been working hard.