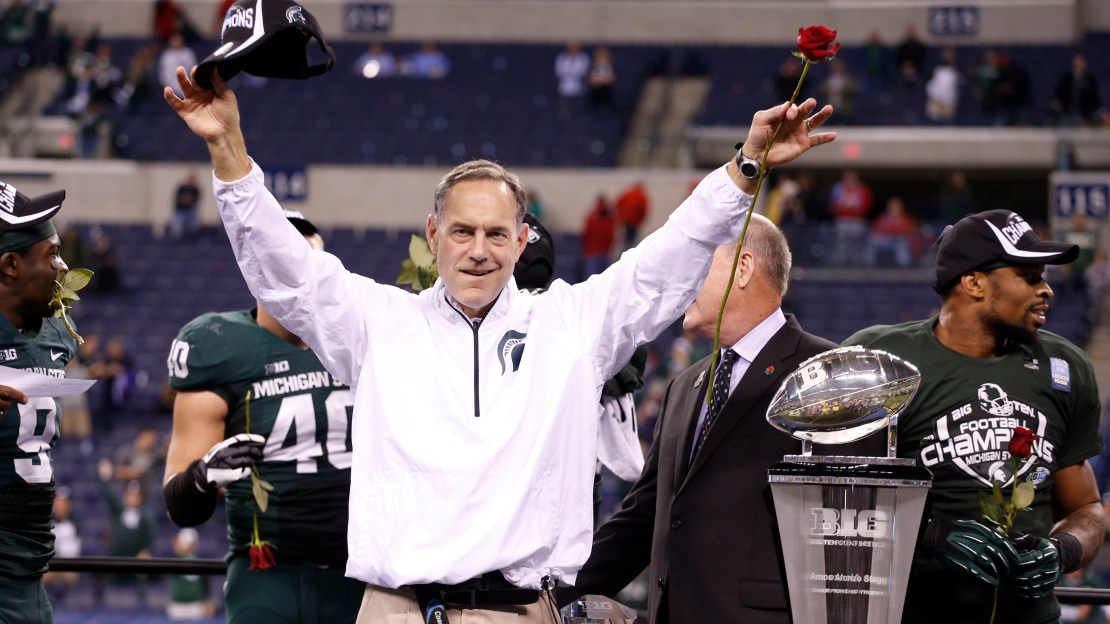 My, how time flies. Don?t believe me? Well, check this out: Mark Dantonio is about to coach his 100th game at Michigan State when the Spartans play at Indiana this Saturday. And a victory Saturday would give Dantonio a winning percentage of .700. Pretty impressive, as he has made MSU the ?it? program in the conference.

"I really didn't look at 100 games, that's almost unthinkable when you're at number one," Dantonio said. "I think we've tried to do it the right way and there's consistency in what we've done."

Everywhere you look around college football, points are being scored at a furious pace-expect for in Penn State games, as David Jones of Pennlive.com points out.

No team has played more low-scoring games in 2014 than Penn State. Penn State and its foes have scored a combined 218 points through six games, averaging 36.3 per contest. That's tied with Stanford as the lowest average of 125 FBS programs. Want more? Penn State games have featured fewer touchdowns (23) than any in the nation. Central Florida (26), Stanford (27) and Northwestern (29) are next.

Hackenberg has thrown just one touchdown pass since a Week 2 win over Akron, as PSU is last in the Big Ten in scoring (21.2 points) and the Lions are averaging 2.8 yards per rush. Worse, Hackenberg has been sacked 20 times - the second-highest total in the Big Ten. That is part of the reason Hackenberg's TD-to-INT ratio (five touchdowns, seven picks) is poor.

What is the biggest concern of Ohio State coach Urban Meyer? The offensive line, which has four new starters. After some shuffling early on, it seems Ohio State is set on a lineup of, from left: Taylor Decker, Billy Price, Jacoby Boren, Pat Elflein and Darryl Baldwin. The unit will be pressed this Saturday by a strong Rutgers front that spearheads a defense that leads the Big Ten in sacks and ranks third nationally.

Rutgers is being motivated by the tried and true ?disrespect? card. It never fails.

"We know that every game we?re not going to be respected," wide receiver Leonte Carroo said. "It?s been like that since we entered the Big Ten. Everybody just said, ?Rutgers is in the Big Ten now, that will be a joke, blah, blah, blah.? We?re just going to continue to do what we do and that?s go out there and give everybody our best shot and play hard and play together.?

Beat Ohio State, and respect won?t be an issue for RU, right?

Always enjoy the Cedar Rapids Gazette?s ?On Iowa? podcast from Marc Morehouse and Scott Dochterman, two of the best in the business of writing about Big Ten sports.

Here is an interesting observation from the Minneapolis Star Tribune: The last two teams ex-Gophers coach Tim Brewster left have improved and thrived-Minnesota and Mississippi State.

Brewster?s current team is Florida State, where he is recruiting coordinator and tight ends coach. And the Seminoles are doing pretty well.

Yes, Northwestern?s loss at Minnesota last week hurt. But the Wildcats still are a contender for the Big Ten West title. InsideNU.com has a good team-by-team look at what should be a whacky five-team race to the finish in the West.

My head tells me Nebraska should win the division, but my heart isn?t yet convinced. I?m still on Iowa?s bandwagon-at least for today.

Some hoops for you on the eve of Big Ten basketball media days: Zach Osterman of the IndyStar.com ranks the Big Ten from 1-14.

Wisconsin is the clear fave. And NU, Penn State and Rutgers look to be at the bottom. But, from 2-11, it looks wide open.

The times, they are tough at Illinois. Progress is desired. Where is it?

What makes the Illini struggles difficult for fans to swallow is the fact other ?rebuilding? Big Ten teams are showing some progress. As Loren Tate of the Champaign News-Gazette points out, previously, when the team hit bottom, the fans carried a strong belief - often mistaken - that rousing success was around the next curve. They?ve seen the Illini rise from the depths in 1983, in 1989-90, in 2001 and again in 2007. But that confidence is slip-sliding away. Hard to see Illinois winning much more in 2014, but who knows?