What did Tom Dienhart learn about Big Ten in Week 7? Here's what! 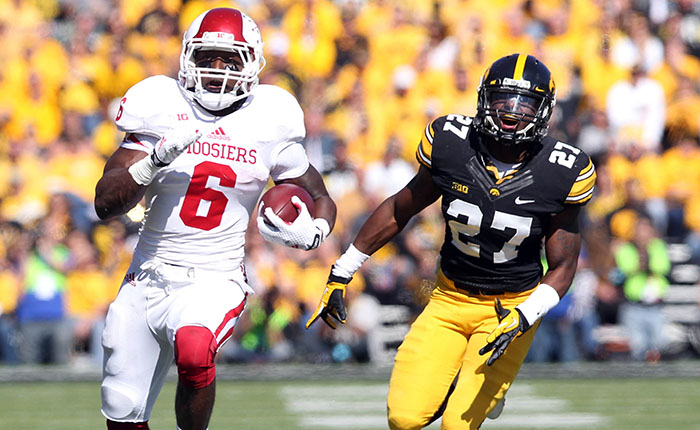 It was a busy week of action in which more was revealed. To wit: It basically was much ado about nothing for the two-quarterback systems at Wisconsin and Iowa. And Michigan State sent another message that it is in no hurry to relinquish its throne.

Here?s what I learned in Week 7.

1. Michigan State showed once again why it?s a champ. The Spartans stepped up and made plays in crunch time when Purdue had the ball with a chance to tie the game late in the fourth quarter. That?s when the Spartan defense stepped up with a pick-six to ice the game. So clutch. It was just like last week, when the defense picked off a pass to end a 19-0 fourth-quarter run by Nebraska. The MSU offense has been outscored 33-0 in the last two fourth quarters, but it hasn?t mattered.

2. Minnesota looks like it will be a factor in the Big Ten West. The Gophers moved to 2-0 in Big Ten play for the first time since 2004 with a 24-17 win over Northwestern. This is a well-coached team that has a good defense. If Mitch Leidner keeps passing well, this offense will be tough to defend. The Gophers seemingly would have a good shot to open 4-0 with Purdue and Illinois up next. That would set up a huge November with Iowa, Ohio State, Nebraska and Wisconsin on tap. Should be fun.

3. That sigh of relief you heard was from Michigan. The Wolverines ended a three-game slide with a home win vs. Penn State. Was it pretty? No. But, maybe, the Wolverines can build off of this. Bowl hopes are alive heading into a bye. Michigan needs to get QB Devin Gardner healthy with a trip to Michigan State next.

4. Indiana RB Tevin Coleman should be in the Heisman race. He ran 15 times for 219 yards and three TDs in a loss at Iowa, averaging 14.6 yards per carry. That average was fueled by touchdown dashes of 83, 69 and 45 yards. Coleman has 120 carries for a nation-leading 1,060 yards and 11 TDs on the season. Are Ameer Abdullah and Melvin Gordon really better than Coleman?

5. If Iowa?s offense keeps playing like it did vs. Indiana, this team will be difficult to beat. There was no need to play two quarterbacks extensively with the way Jake Rudock was spinning the ball. He hit 19-of-27 passes for 210 yards with two touchdowns. But, this was against Indiana, which has one of the most generous defenses in the Big Ten. The Hoosiers entered Saturday No. 13 in the Big Ten in scoring defense (28.6 ppg). Regardless, this was encouraging for a Hawkeye attack was No. 12 in scoring (22.6 ppg) coming into Saturday.

6. Where does Penn State go from here? It?s difficult to envision this offense getting any better. The line continues to struggle. That has short-circuited the running game and has Christian Hackenberg often running for his life. How bad has it been? The Nittany Lions have tallied one touchdown in their last two games. It could be a long second half of the season for this short-handed team. But, better days are ahead.

7. Without QB Nate Sudfeld, Indiana?s offense is in trouble. He left the game at Iowa with injury, giving way to true freshman Chris Covington. And, it wasn?t pretty. Before Sudfeld left, he didn?t look good, either, completing 4-of-9 passes for 85 yards with a touchdown and interception.

8. I?m still not sure what to make of Wisconsin. Yes, the Badgers beat Illinois, 38-28. But this is a struggling Fighting Illini squad. The Wisconsin quarterbacks looked OK, as Joel Stave made his first start of 2014 and hit 7-of-14 passes for 73 yards. Tanner McEvoy completed 3-of-4 passes for 24 yards. Add it up, and that? 10-of-18 passing for 97 yards. At least there were no interceptions after these signal-callers combined for four last week.

9. Yes, Purdue lost, but it?s obvious this team is improving. The loss at home to Michigan State was more proof, as Purdue pushed MSU to the limit. Austin Appleby continues to impress. You just wonder how the staff ever went with Danny Etling to begin with. Oh, well. No sense looking back. The Boilermakers have some hope. But can this team win three more games to get bowl-eligible? It?s gonna be very tough with games left at Minnesota; at Nebraska; Wisconsin; Northwestern; at Indiana.

10. Northwestern is pretty good. But unless it amps up its offense, winning big consistently will be difficult. There just isn?t enough big-play explosiveness in the Wildcat attack. The longest pass play was 21 yards; the longest run was 12. NU ran 84 plays to Minnesota?s 54 yesterday and still lost. Twice, Northwestern had 16-play scoring drives. You just can?t nickel-and-dime your way to greatness on offense.