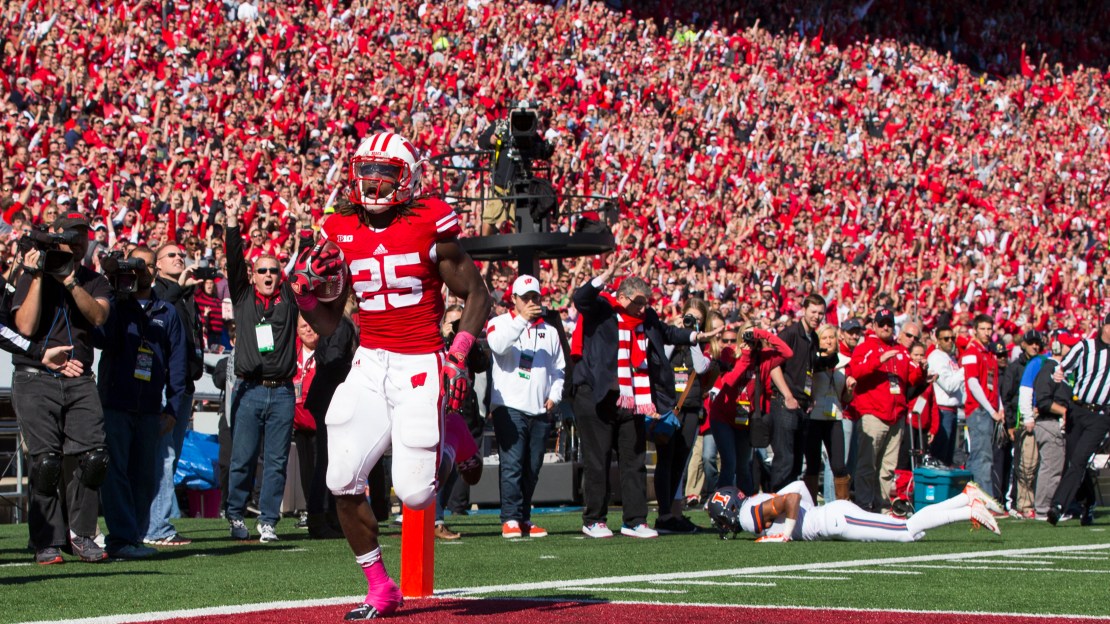 It was an exciting weekend of Big Ten football, highlighted by Minnesota's  24-17 win over Northwestern in a Big Ten West showdown. There were plenty of exceptional individual performances on both sides of the ball in Saturday's conference action.

1. Melvin Gordon, RB, Wisconsin. Gordon continues to make his case for being the best running back in the nation. The Badgers' do-it-all back rushed for 175 yards and four touchdowns in Wisconsin's 38-28 win over Illinois on Saturday. This marked the 14th game in his career that Gordon has rushed for 140-plus yards, which is the most of any active FBS player. What a special talent.

2. Tevin Coleman, RB, Indiana. Like Gordon, Coleman has to be in the running for the nation's best running back. The star Hoosiers RB had another huge game on Saturday, rushing for 219 yards and three touchdowns in a 45-29 loss at Iowa. Coleman now has eight straight 100-plus yard games and 15 straight games with a rushing touchdown, both of which are the longest streaks of any player in the FBS.

3. Damien Wilson, LB, Minnesota. Wilson is making quite the name for himself this season. The Gophers' senior linebacker was outstanding again on Saturday, recording a game-high 15 tackles in Minnesota's impressive 24-17 victory over Northwestern. Wilson is averaging more than 10 tackles per game this season, which ranks among the best in the Big Ten.

4. Leon Jacobs, LB, Wisconsin. Jacobs had a breakout game on Saturday in the Badgers' 38-28 win over Illinois. The talented sophomore linebacker had a game-high 12 tackles, two of which were for a loss, and added 1.5 sacks. Jacobs and the Badgers defense held Illinois to just 288 total yards of offense.

5. Tony Lippett, WR, Michigan State. Lippett has developed into the top wide receiver in the conference this season, and he reminded Big Ten fans of just that in the Spartans' 45-31 win over Purdue on Saturday. The talented wide receiver hauled in seven catches for 138 yards and a touchdown in the victory. This was Lippett's fourth 100-yard reviving game this season.

6. Corey Clement, RB, Wisconsin. Are there really going to be two Wisconsin running backs on this list? You bet. Clement was almost as exceptional as Gordon in Wisconsin's win over Illinois on Saturday. The Badgers' sophomore back rushed for 164 yards, including a 72-yard score in the victory. As a team, the Badgers totaled 401 yards on the ground on Saturday.

7. Akeem Hunt, RB, Purdue. Hunt was outstanding, despite Purdue dropping a 45-31 decision to Michigan State. Hunt totaled 102 yards and had three touchdowns in the loss, including a 52-yard run early on in the fourth quarter. Hunt has now totaled 100-plus yards of offense in three straight games.

8. Jake Rudock, QB, Iowa. Rudock separated himself from the rumored quarterback-by-committee in the Hawkeyes' 45-29 victory over Indiana on Saturday. Iowa's junior signal-caller was efficient and accurate, hitting 19-of-27 passes for 210 yards and two touchdowns. He has now thrown 25 touchdown passes in his career, which places him ninth on Iowa's all-time list.

10. Devin Gardner, QB, Michigan. The numbers were solid (16-26, 192 yards, 1 TD, 1 INT), but it was the gutsy performance from this guy that really stood out in this game. After getting hurt in the third quarter, Gardner came back in the game and helped guide the Wolverines to a much-needed 18-13 win over Penn State in a Big Ten East matchup.