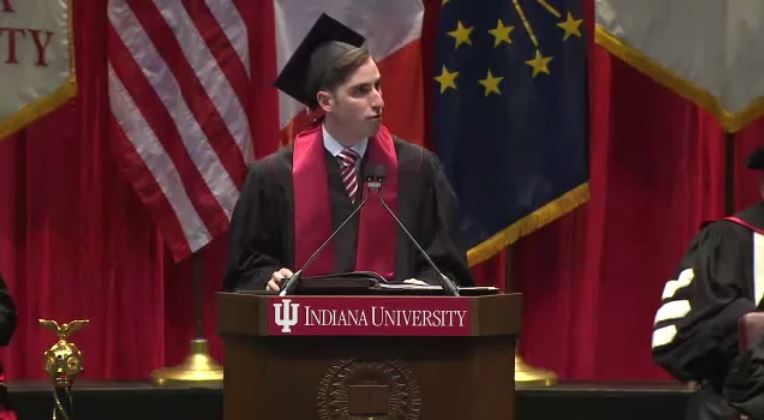 For many people, addressing a crowd of 17,000 evokes the sort of dread associated with skydiving or oral surgery. In most cases, that?s not due to any significant physical limitations in speech, but rather because the idea of looking out at a vast sea of faces that?s staring right back can be downright terrifying.

Parker Mantell, a student at Indiana University, knows how nerve-wracking that situation can be. He gave a commencement address at IU before an audience that size just a few months ago. But Mantell is not your typical speaker - he has a stutter.

Mantell found out about the opportunity from an e-mail he received in March from the office of Indiana?s Vice Provost for Undergraduate Education, which included an invitation to submit an application for the speaking role at the graduation ceremony. After thinking it over, he decided to throw his hat in the ring.

?As a person who is far from the best orator, I really thought long and hard about whether to even apply,? he said. ?Ironically enough, I felt inspired to seek the opportunity precisely because I was not the best orator - meaning that each time I had overt troubles with a word, the audience could not only relate their respective challenges to the message itself, but also to the messenger.?

After being selected as a finalist, Mantell was interviewed by the Student Commencement Speaker Selection Committee, which included representatives from the IU faculty, staff and student body. He also had to deliver his speech in front of them. The next day, he was informed that he?d be giving that address to a much larger group.

At the graduation ceremony, Mantell managed to get over his nervousness and provide a memorable and meaningful experience for everyone attending. His moving remarks about not letting personal challenges limit achievements - and the example of that he set just by being at the podium - inspired his fellow Hoosiers.

?The trepidation that arrives before speaking in front of a sizable crowd lasts a few minutes, yet the impact that our words can have on others can truly last forever,? he said. ?As a person who stutters, I reminded myself before taking the stage that the only thing more daunting than saying a particular combination of vowels and consonants within a sentence is the prospect of never saying them.?

The impact of his speech was felt beyond Bloomington. A video of it went viral, and it has since been viewed around the world, as evidenced by the responses to it Mantell got from people in places as far-flung as Germany and Iran.

Mantell said he?s truly grateful that he?s managed to inspire others the way Indiana has inspired him.

?Something as seemingly ordinary as joining a fraternity or giving class presentations before lecture halls can be among the most daunting of endeavors for college students with disabilities,? he explained. ?While interacting with the many people who make up the IU community - whether it was the Office of Admissions as a high school junior, the professors of those courses requiring presentations, my fraternity brothers throughout my four years or the Student Commencement Speaker Selection Committee last spring - I noticed a common tendency: to exclude stuttering as a factor when weighing the decision to admit me, to grade me, to befriend me and to select me, respectively.

?To borrow a thought from my remarks, while any other university might have instructed me to limit expectations of what it?s possible to do both inside and outside of the classroom, IU taught me to grow them.?