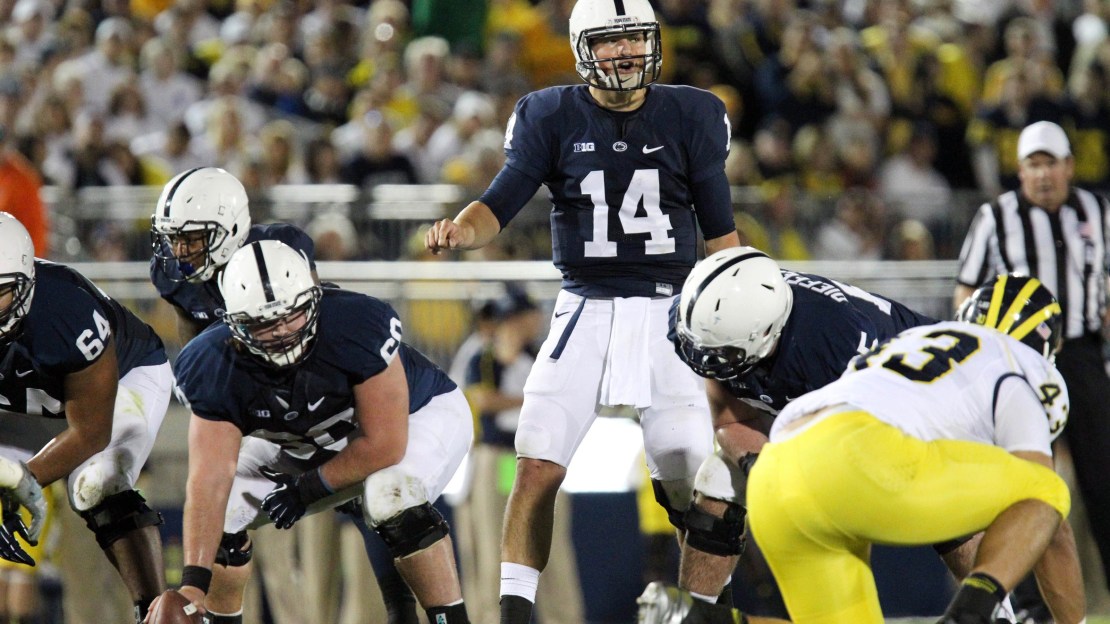 Penn State may be at a tipping point of sorts when it visits Michigan. The last time out, the Nittany Lions lost at home to Northwestern. And it wasn?t close. How will Penn State respond? James Franklin knows he has a good defense. So, this team success figures to be defined by how the offense and special teams play.

Penn State's scoring offense is 96th in the country. Its passing offense ranks 25th, rushing ranks 113th, and its 2.8 sacks allowed per game ranks 104th. The picture is not much brighter on special teams. The Lions have struggled to find explosion returning punts, are allowing 24.67 yards per kickoff return, and rank 118th with a net punting average of 33.08 yards per boot. The unit is one of 18 in the country to allow a punt block, and only two programs, Utah State and Boise State, have allowed more kicks to be blocked (four) than Penn State's three. You get the picture.

I?m a big Rich Rodriguez guy. So it was fun to see this piece about the current Arizona coach saying that if Bo Schembechler had still been at Michigan when he was there, RichRod probably wouldn?t have had to deal with some of the off-field things he did while in Ann Arbor.

"People say, 'Why didn't it work?' Maybe it was going to," Rodriguez said to ESPN. "Maybe we didn't just get a chance to see it through. But I'm happy now. And we're not done, either. We've got a lot of work left. We're not nearly as good as we will be in the next few years. That's the most encouraging part."

Hard not to think that if everyone at Michigan had been behind Rodriguez, he would have succeeded. He has at every other stop. And he?s as much a ?fit? at Arizona as he was at Michigan.

Speaking of Michigan, it has a positive development along its offensive line, as Kyle Kalis is developing into a nice player.

Two weeks ago against Minnesota, Kalis took over at right guard with Graham Glasgow moving to left guard in place of Erik Magnuson. That combination continued last week against Rutgers. And, for now, Michigan's happy with the way Kalis has progressed.

?I think Kyle?s done a really good job, a guy who, at times, wasn?t playing a lot for us but continued to work hard in practice,? Michigan offensive coordinator Doug Nussmeier said. ?He probably played his best game the other night, and you really can see growth in him.

?I think he?s got a really high ceiling, but he has to continue that growth each and every day.?

Kalis arrived on campus amid a lot of hype. Seems it may have been worth it.

Tony Lippett is the unquestioned leader of the Michigan State receiver corps. Heck, he?s probably the best wideout in the Big Ten. But he needs a sidekick. And that sidekick just may be Aaron Burbridge.

If Ohio State wins out, will it notch a playoff spot? Rob Oller of the Columbus Dispatch thinks so. And I agree.

No doubt, Minnesota is riding high coming off the Little Brown Jug win vs. Michigan. Will the Gophers have a letdown coming off a bye week with Northwestern coming to town?

Minnesota has three winnable games ahead-Northwestern, Purdue, at Illinois. And it needs to take care of business. If they do, the Golden Gophers could very well be a real factor in the West. That would set up a monster make-or-break November with games vs. Iowa, Ohio State, at Nebraska and at Wisconsin.

The debate rages: How will the two-quarterback system work for Iowa when Indiana visits this Saturday? Kirk Ferentz says he isn?t clear how the two will be used. That?s a bit concerning.

The last two seasons, Rutgers has incurred a slide in the second half of the season. The players say they want to put an end to that this season. We shall see.

In 2012, Rutgers got off to a 7-0 start before stumbling to a 9-4 finish. The drop-off was even more drastic last season. After a 4-1 start, the Scarlet Knights went 2-6 down the stretch, with three losses by 24 points or more.

"When things aren't going our way, the season kind of folds over," junior wide receiver Leonte Carroo said. "We just have to learn to finish and get past that other mentality."

Monster challenges loom for 5-1 RU down the stretch: at Ohio State, at Nebraska, Wisconsin, Indiana, at Michigan State, at Maryland. Can the Scarlet Knights have a winning mark vs. those remaining six foes?

The gang at InsideNU.com says the Wildcats? offensive turnaround is here to stay.

In the upset of Penn State, Northwestern started to get back to the offensive philosophy fans were used to seeing. There were still power plays (that didn't really work), but NU spread the field more, sent the superbacks out for more passes and subsequently lessened the burden on the offensive line. While it still made some mistakes, the offensive line was much better, and it executed in scenarios that allowed the players to play to their strengths.

Could IU pull an upset at Iowa? Maybe. A big key will be the defense, which is making some strides.

Coordinator Brian Knorr said that except for the 31-27 victory at then-No. 18 Missouri, the defense had its best performance in last week's 49-24 victory over North Texas. Through three quarters, the Mean Green were limited to 218 yards and one touchdown. The Hoosiers rank 12th out of 14 Big Ten teams in total defense (415.2 yards). But figures elsewhere are encouraging: fourth in tackles for loss (7.0) and fifth in opponents' third-down conversions (32.5 percent). There is hope. If the defense can keep making improvements, IU?s bowl hopes float.