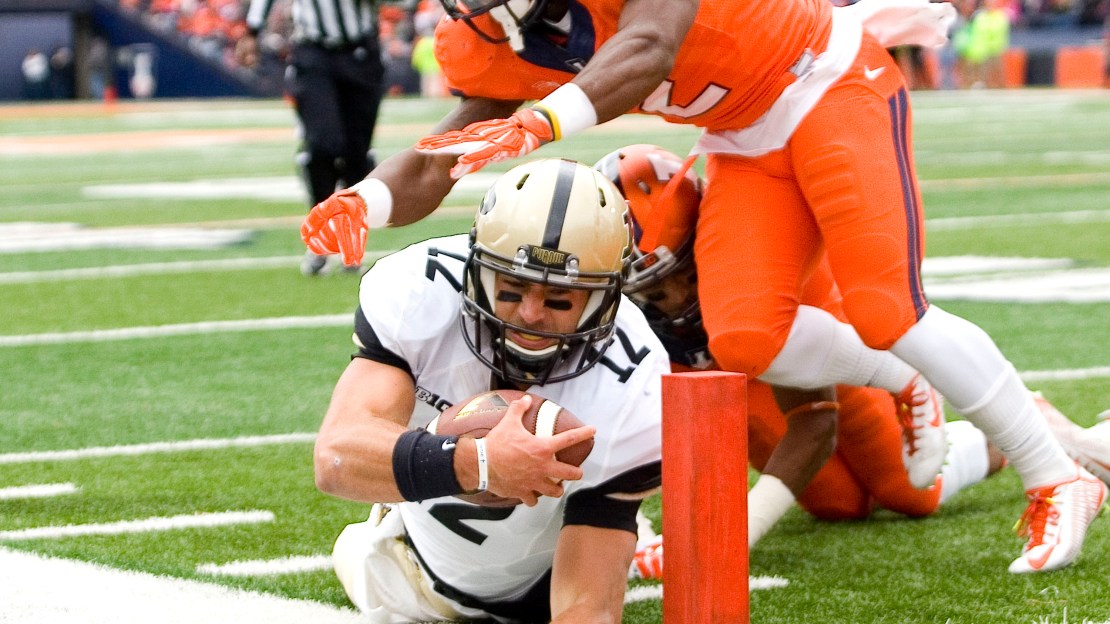 Opinions? Analysis? Facts? They all are here in a hard-edge look at the world of Big Ten football entering another weekend of action. Did you really think Northwestern at Minnesota would be a big game back in August? Who cares? Just enjoy.

It?s hard to think of Ohio State as ?flying under the radar.? But that?s exactly what the Buckeyes seem to be doing when it comes to their quest for a playoff spot. If Ohio State can run the table and win the Big Ten with a 12-1 record, it almost assuredly will earn a playoff spot. The Buckeyes are off this Saturday and then play Rutgers, at Penn State and Illinois in a run-up to a huge trip to Michigan State on Nov. 8 which will be a playoff elimination game.

Who needs a win more: Penn State or Michigan? I?m gonna say it?s the Nittany Lions. Penn State?s season seemingly has more hope left in it than Michigan?s. The Nittany Lions are 4-1, but it feels like things may be teetering on the edge. Penn State was off last week after suffering a tough 29-6 home loss to Northwestern in which it failed to score a touchdown and basically was whipped in every phase of the game. Was that a preview of things to come? A win at struggling Michigan would quell concerns for at least a week and push PSU toward a coveted bowl.

Speaking of Michigan, the ship seems to have sailed on the Wolverines? prospects for success in 2014. The offense wheezes and coughs each week, still struggling for consistency and now moving forward without top running back Derrick Green (out for the year with injury). And the defense hasn?t been doing its part, as the secondary fell apart last week in a loss at Rutgers. The Wolverines need four more wins to become bowl-eligible. Can you find four victories in here? Penn State; at Michigan State; Indiana; at Northwestern; Maryland; at Ohio State. It?s gonna be close.

Don?t underestimate Northwestern?s chances for winning the Big Ten West if it can escape Minnesota with a win on Saturday. This team?s confidence is growing as it rides a three-game winning streak. And there seems to be a mojo about the Wildcats that has developed. The cauldron of the controversy of the 0-2 start seems to have galvanized NU. Combine that with a strong defense and an emerging ground game, and you have the makings of a dangerous squad that believes in itself.

The most talented team in the Big Ten West is Nebraska. But is it the best team? The jury remains out. A big key for the Cornhuskers will be the continued development of quarterback Tommy Armstrong. Nebraska is off this weekend before traveling to Northwestern for what shapes up as a big game.

I loved everything Austin Appleby did last week in Purdue?s win at Illinois. The redshirt sophomore looked like the answer to a struggling offense?s prayers in making his first career start. Appleby extended plays with his feet and generally looked cool, calm and in command. You just wonder what took so long for Appleby to get a chance over Danny Etling. Regardless, the competition gets appreciably difficult this weekend with a visit from Michigan State. This will give us a better gauge of Appleby. He can?t get swallowed up.

Illinois is moving forward without quarterback Wes Lunt, who is out four-to-six weeks with a broken leg. This isn?t good. The Illini have lost two in a row and play at Wisconsin this Saturday vs. a Badgers team that has a sense of urgency after losing at Northwestern. Let?s just say that things could get ugly for the Fighting Illini. Illinois (3-3) won?t be favored in any of its remaining games. How will Tim Beckman and Co., respond down the stretch?

Maryland, Rutgers, Nebraska and Ohio State are off this week. And the team that needs the down time the most is Maryland. The Terps are coming off an eye-opening home loss to the Buckeyes in their first Big Ten game ever, falling 52-24. Maryland must regroup and figure out how to plug up a defense that keeps springing leaks. The scoring defense is No. 11 (25.2 ppg) and the total defense is No. 13 (451.2 ypg). Stopping the run has been at the crux of the Terps? issues, as they allow 212.0 ypg, which ranks 13th in the conference.

I know Urban Meyer has said Braxton Miller will be Ohio State?s quarterback next season when he returns from injury. But, golly, J.T. Barrett is looking awfully good. Is he a better all-around ?quarterback? than Miller? Just wondering. By the way: Barrett currently leads the Big Ten in passing efficiency and total offense as a redshirt freshman.

About Tom DienhartBTN.com senior writer Tom Dienhart is a veteran sports journalist who covers Big Ten football and men's basketball for BTN.com and BTN TV. Find him on Twitter and Facebook, read all of his work at btn.com/tomdienhart, and subscribe to his posts via RSS. Also, send questions to his weekly mailbag using the form below and read all of his previous answers in his reader mailbag section.