Danny Anthrop Q&A: 'It was something I hadn’t experienced in a while' 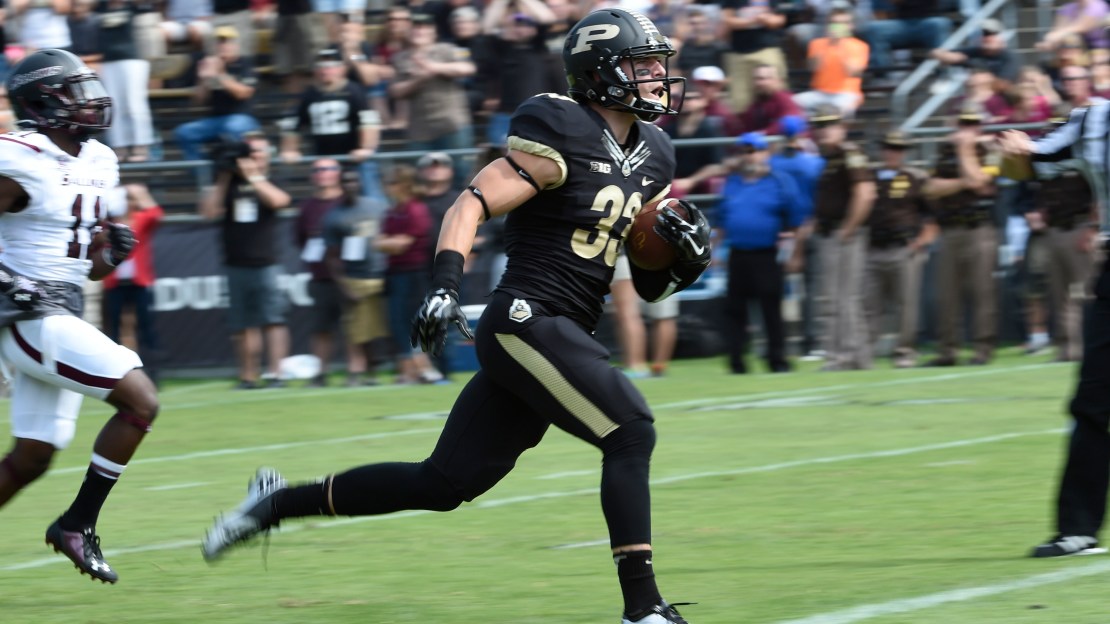 Purdue notched its first Big Ten win since 2012 last week when it took a 38-27 decision at Illinois. And a big reason why the Boilermakers got that victory was the offense, which enjoyed a breakout performance en route to notching 551 yards behind first-time starting quarterback Austin Appleby. Not bad for an attack that entered the game last in the Big Ten in total offense.

Wideout Danny Anthrop played a big role in the attack?s explosive effort, catching three passes for 99 yards, with one going 80 yards for a TD. The 6-0, 191-pound junior from nearby Central Catholic High School leads Purdue in receiving yards with 336 and TD grabs with three. He?s second in receptions with 21. No other wide receiver has more than eight grabs.

I caught up with Anthrop as he prepped to play Michigan State and its vaunted defense that?s yielding only 297.0 yards per game.

Q: How big was that win at Illinois?
A: It was huge. You could feel the momentum and energy in the locker room at halftime and after the game. It was something I hadn?t experienced in a while at Purdue. I hope to experience it more from here on out.

Q: What does Austin Appleby bring to the table?
A: He takes control of things. He has a lot of confidence and a lot of command in the huddle. That?s something that really goes a long way, especially at quarterback. When he?s in there and saying stuff, you know it?s not fake. I think that?s the biggest thing that comes from him.

Q: What impresses you about him skill-wise?
A: The way he improvises, and the way he feels pressure and evades it is huge. He showed that in the last game when he was scrambling around and they didn?t get any sacks on him. He can use his legs better than people think.

Q: How is Danny Etling handling things?
A: He?s a great kid. He has a good head on his shoulders. He is handling it like you think he would. He comes to work every day like he did when he was a starter. He still communicates the same. He was electric on the sideline with us on Saturday. I think he was happy to see the quarterback position do well and the team do well. He was as happy as any of us out there.

Q: How would you describe Purdue?s offensive style?
A: It?s competitive. We refuse to be stopped. The play isn?t over until it?s over. We go down fighting. In the run game, we?ve been breaking out with the speed we have with Raheem (Mostert) and Akeem (Hunt) and the power from Keyante (Green) and (Brandon) Cottom is huge for us.

Q: Break down the other receivers.
A: There is a lot of speed out there, especially with B.J. (Knauf). DeAngelo (Yancey) has a bit. DeAngelo?s big thing is his playmaking ability, his size and hands. He makes catches I don?t think he?s going to get to. I think it?s gonna be incomplete and he snags it. He?s a playmaker which is what you need out of the X spot. (Cameron) Posey is reliable.

Q: What do you bring?
A: I do whatever is asked to the best of my ability. I feed off what the quarterback gives and do things to the best of my ability. In the last game, I got to show that I have some speed. In big situations, they like to go the receivers, especially on third downs. We like to come up big as receivers in those spots when we need a first down to keep the drive moving.

Q: How has the offense evolved since last year?
A: It really has to do with a year?s worth of work we have put in. It all culminated on Saturday. We just came together, especially at the quarterback position. We have been playing consistently on the perimeter and in the backfield.

Q: What are the challenges facing this Michigan State defense?
A: You have to respect them for what they have accomplished in the last year and this year. You watch them on film and see them flying around. There aren?t a lot of solo tackles on that defense because they all swarm to the ball so well. They are physical and fast. They have great DBs, especially on the corners. We are excited for the challenge. It will be a big step for us going against this defense.