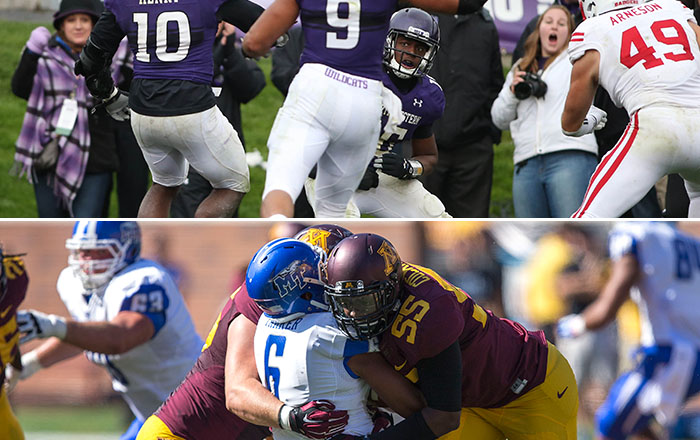 Welcome to the wild, wild Big Ten West, a division race where just about anything seems possible.

More shall be revealed as the teams begin to play each other this month and next. And the first of many defining games lurks this Saturday, with Northwestern playing at Minnesota. Back in August, few saw this as a key Big Ten West game. But, that?s what it has morphed into.

The Wildcats have been an early surprise, sitting atop the West with a 2-0 league mark after winning at Penn State and then beating visiting Wisconsin last Saturday. It?s been about the defense in Evanston for a Wildcats squad that at one point didn?t allow a TD for nine consecutive quarters during its current three-game winning streak that began with a victory over FCS Western Illinois on Sept. 20.

?I think our identity is a work in progress. I really do,? Northwestern coach Pat Fitzgerald said. ?I think the reason why we have been successful now for a couple weeks is because the guys are really invested greatly during the week. They put in the time individually and collectively. They work diligently on the field to come together offensively, defensively and in the kicking game to fundamentally execute what we are asking them to do. I think we are definitely playing with a lot more passion and a lot more physicality than we did earlier in the year.?

Things weren?t so rosy just a few weeks ago. Fitzgerald said his team?s lack of toughness was an ?embarrassment? after the team opened with home losses to Cal and Northern Illinois.

?I played on two championship teams here because we had a hard edge and we were tough,? Fitzgerald said in the aftermath of the 0-2 start. ?I?ve coached five bowl teams here in a row and coached multiple guys who have played at an All-Big Ten level, and they were tough.

After the loss to Northern Illinois, the team?s Leadership Council asked Fitz to be harder on them in practice. That may have been a first in college football annals. So, instead of having some off days during a bye week after the NIU loss, Fitz ran his team through conditioning drills and worked on football fundamentals. The results have been a three-game winning skein that has the Wildcats thinking that they may be able to win the West.

The Wildcats are built around a strong defense that is No. 3 in the Big Ten in scoring (16.2 ppg). This NU defense is dotted with athletic ability rarely seen in Evanston in form of players like safeties Ibraheim Campbell (who is out with injury) and Godwin Igwebuike, linebacker Chi Chi Ariguzo and end Ifeadi Odenigbo, among others. These guys can run to the ball, hit and tackle.

The offense also is showing signs as the ground game is gaining traction. The offseason transfer of running back Venric Mark was a blow to the unit?s playmaking ability and production from the tailback spot. Factor in the loss of quarterback Kain Colter, another top running threat, and the NU offense was struggling. An improved front has helped the rushing attack along with the emergence of freshman back Justin Jackson.

"The guys up front starting to play with a little bit of an attitude,? Fitzgerald said. ?They're not there yet. But that helps. We also have depth at wide receiver now. We didn't have depth at wideout the first two games. We're able to roll those guys, and a lot of those runs on Saturday were because our wide receivers engaged blocks."

The trip to Minnesota drips with opportunity for NU. A win vs. Minnesota would give the Wildcats even more mojo coming home to play Nebraska.

Minnesota is also thinking big, coming off a huge win at Michigan before being off last week. Like Northwestern, the Gophers have a strong defense. Also like Northwestern, the Gophers have an offense that?s still a work in progress. NU?s issue is running, which is no problem for Minnesota. But the Gophers struggle to pass. Another thing the teams have in common: They didn?t start well, though Minnesota?s beginning wasn?t as bad as NU?s.

?I think if you look at us, you would say we struggled, too,? Kill said. ?Sometimes early in the year for whatever reason - timing, continuity, injuries - sometimes you get off to a slow start.

?I think the key is that you keep improving each week, and ? as you hit the Big Ten, just keep climbing the mountain. There are certain teams in our league that do a heck of a job of that. Iowa does a good job of that each year.?

Northwestern and Minnesota each are looking to keep improving and to take that proverbial next step in their development. It?s gonna be fun to see if either of these teams can make a push for the championship in the wild, wild and wide-open West.

Why not Minnesota or Northwestern? Why not, indeed.