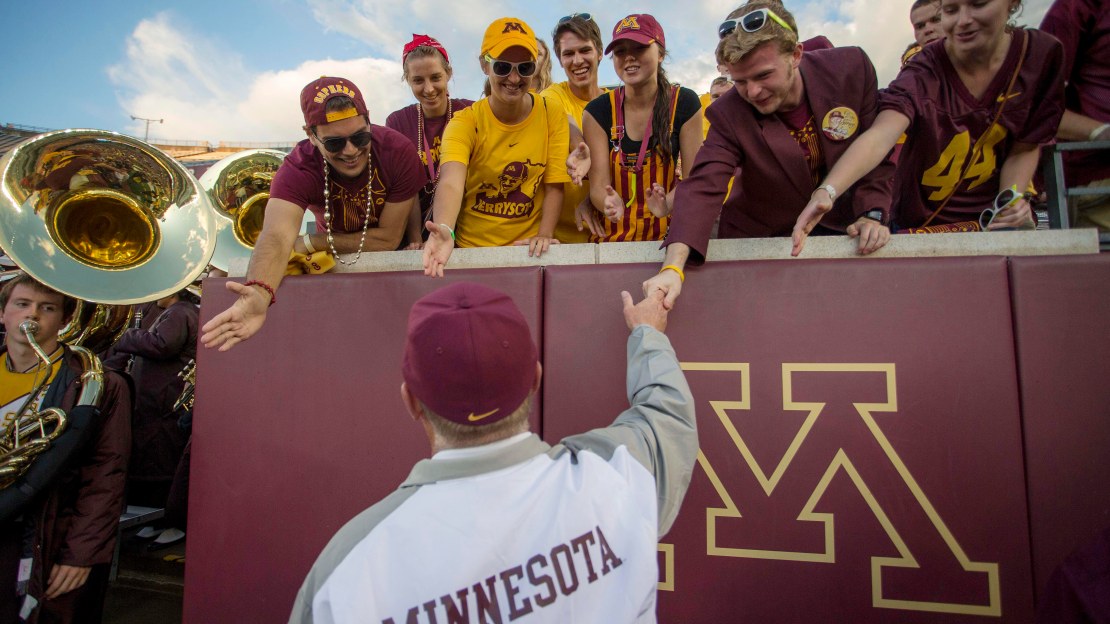 This is a light week of action with just five games-all Big Ten affairs–as Maryland, Nebraska, Ohio State and Rutgers are off. But there are several good games, headlined by Northwestern at Minnesota. Yes, I said Northwestern at Minnesota, not Penn State at Michigan. The Wildcats and Gophers are surging and look to be factors in a West race that could be wide open.

See my Week 7 previews and game rankings below:

1. Northwestern (3-2, 2-0) at Minnesota (4-1, 1-0). This suddenly has become a big game, as each is emerging as a potential contender in the Big Ten West. Northwestern has won three games in a row after opening 0-2, sitting atop the division with a 2-0 Big Ten mark, following surprising wins at Penn State and vs. Wisconsin. Minnesota was off last week after winning two games in a row, the latter of which had encouraging signs from the passing game. Both of the teams are anchored by strong defenses. That means whichever offense can get traction figures to win. The Golden Gophers stole one in Evanston last season, however the Wildcats won their last three trips to Minneapolis.

2. Penn State (4-1, 1-1) at Michigan (2-4, 0-2). If you like offense, you may want to look away. The Wolverines are last in the Big Ten in scoring (22.3 ppg) and the Nittany Lions are 11th (22.8 ppg). Michigan has lost four in a row vs. the Nittany Lions, including last year's quadruple overtime defeat. Before that, Michigan won nine in a row in the series. Michigan has lost three in a row and is 4-10 in its last 14 games. Another ugly note: The Wolverines are 0-2 in the Big Ten for the first time since 1967. Penn State was off last week after a bad 29-6 home loss to Northwestern in which it didn?t score a touchdown. It was PSU?s first loss after a 4-0 start, as the team seemingly was exposed. Can this frequently overwhelmed offense that can?t run the ball (13th in the Big Ten, 101.0 ypg) get on track behind a spotty line? Christian Hackenberg hasn?t thrown a TD pass in the last three games. The defense excels, as it?s No. 1 in the league vs. the run (60.2 ypg) and No. 2 overall (288.8 ypg).

3. Indiana (3-2, 0-1) at Iowa (4-1, 1-0). The Hawkeyes may be one of the most unimpressive 4-1 team in the nation. The defense has been consistently good. The offense? It has gone in fits and starts. And now the staff says it will play two quarterbacks. Where will this lead? (I?m shrugging my shoulders.) The Hoosiers rebounded from a home loss to Maryland to whip North Texas, allowing IU to get on track as it aims at a bowl. A struggling Indiana defense that is 12th in the Big Ten may have a chance for success vs. a struggling Iowa offense. This will be the best test yet for the Hoosiers? offense, which has flipped its script under Kevin Wilson by running (3rd in the Big Ten) better than it passes (10th in the Big Ten). How will it respond? The last time these teams met, the Hoosiers took a 24-21 decision in Bloomington in 2012. IU last won in Iowa City in 2007.

4. Michigan State (4-1, 1-0) at Purdue (3-3, 1-1). The Spartans have won the last five vs. Purdue and will arrive in West Lafayette with momentum coming off a big home win vs. Nebraska. MSU looks like the best team in the Big Ten and can?t afford a slip in a quest for a conference title and playoff bid. The Boilermakers also will bring some mojo to the gridiron, fresh off their first Big Ten win since 2012. The offense showed some life under QB Austin Appleby, but this will be a huge step up in competition for a still-developing program. Can Purdue?s offense have sustained success vs. an always-rugged Spartan defense? Michigan State only took a 14-0 decision last year in East Lansing. Will it have another letdown?

5. Illinois (3-3, 0-2) at Wisconsin (3-2, 0-1). Both of these teams come into Camp Randall Stadium lagging and in search of something positive to build on. The Badgers got humbled at Northwestern, as the offense is sputtering with spotty quarterback play. Can Tanner McEvoy or Joel Stave get the job done? The jury remains very much out. On Monday, the staff said it will use both. The defense is doing its part, ranking No. 1 overall in the Big Ten (285.6 ypg) and No. 2 in scoring (15.6 ppg). The Fighting Illini have their own issues, with most being on a defense that?s the worst in the Big Ten (35.5 ppg; 482.3 ypg). But the offense may be in trouble, too, with QB Wes Lunt out four-to-six weeks with a broken leg. Not good. The season could be slipping away for the Illini coming off a tough home loss to Purdue. Wisconsin has dominated Illinois of late, going 13-3-1 in the last 17 meetings. The Fighting Illini?s last win in Madison came in 2002.