Volleyball Report: Looks like Big Ten standings will be fluid this season 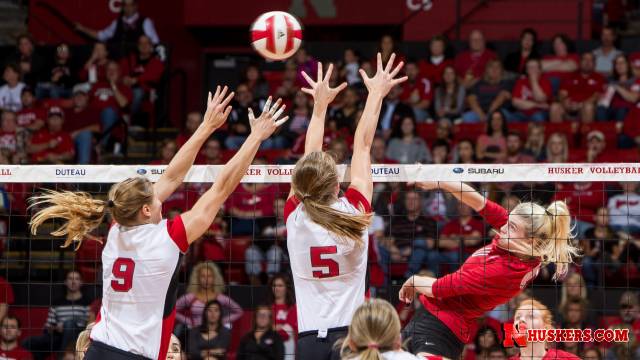 No outcome was assured in the second week of Big Ten play, with various league members looking drastically different from match to match, and even set to set. However, Indiana, Ohio State, Purdue and Wisconsin all came away with back-to-back wins and made it clear that the Big Ten standings will be constantly shifting.

Nebraska notched its first win against a top 5 opponent Friday, this coming in its fourth try after losing three earlier chances at home in the Devaney Center. The win over No. 3 Penn State appeared to be the payoff for a grueling non-conference schedule that set the Huskers up for the 10-week grind of Big Ten play. But the celebration would not last beyond Saturday, as Ohio State played its best match of the season and pulled off an unthinkable comeback in set 5, down 14-11, to win 16-14, to beat the Huskers.

The Buckeyes needed this win not simply for the sake of their league and overall record but to build confidence for the remainder of the season. Ohio State dropped its first two matches in Big Ten play and played a soft non-conference schedule. Saturday?s road win in Lincoln should provide a boost to Geoff Carlston?s team that could propel it for the rest of the year. Duke transfer Elizabeth Campbell had 23 kills and 20 digs, an effort that earned her the Big Ten Player of the Week award, and Erin Sekinger and Katie Mitchell added 20 and 19 kills of their own against the Huskers. Wednesday?s match against Illinois will be a chance for the Buckeyes to build off their newfound momentum.

Wisconsin defeated Northwestern in straights sets and then fended off ?the loudest environment? Kelly Sheffield had ever coached in against Illinois on Saturday to record a perfect week.

The Badgers controlled the majority of the match against the Illini, with the exception of the third set where they were on the wrong side of a 14-1 run. Wisconsin responded, though, in set four opening up a five-point lead midway through the fourth before winning the final two points after being tied at 23. The Badger passing looked crisp against Illinois and allowed setter Lauren Carlini to set up Dominique Thompson often, as the senior middle finished with a team-high 14 kills. This week Wisconsin has a chance to take a deep breath and have a full week of practice before facing Rutgers and Maryland at home.

All 14 Big Ten coaches will tell you there is nothing to look down on about a 2-0 week, but for Purdue and Indiana, two wins were to be expected against the league?s newcomers. The Boilers and Hoosiers both swept Rutgers and dropped one set apiece to Maryland in the first home weekend for the Scarlet Knights and Terrapins.

Indiana is now 3-1 in Big Ten play for the first time since 1998, surpassing their league win total in two of the past three seasons. Purdue is the Big Ten?s lone unbeaten, at 4-0; the Boilermakers have defeated the injury plagued Michigan schools and the wide-eyed newcomers to sit atop the conference standings.

This week, Purdue will meet the legitimate challenge of facing Indiana twice in the new travel partner system. This sets up the possibility that the Boilermakers could be 6-0 before their Oct. 17th home match against Penn State. The Boiler Box may want to pass out earplugs as the Illini did this past weekend to prepare fans for the noise level that is certain to be dangerous to the ear drums when the defending national champs come to West Lafayette.

After what must have seemed like an endless road trip, Penn State finally opens its home conference slate with a midweek match against the Wildcats.

The Nittany Lions could use the comforts of home after a surprising loss to the Huskers, a performance in which they failed to hit .200 for the first time all season. Russ Rose?s team has won 93 of their last 95 Big Ten matches at Rec Hall and have lost just three sets (sets, not matches) to the Wildcats since 2003.

Northwestern is 3-1 in Big Ten play for the first time since 2010 and entered the AVCA poll at No. 24 for the first time since November of that same year. The Wildcat freshmen are elevating the entire team, with Symone Abbott and Taylor Tashima taking on impact roles in their first years in Evanston. The Wildcats will have their chances if Penn State can not sure up its blocking, but the Lions will likely have too much firepower for Northwestern to keep up.

Nebraska appeared to have found its stride against Penn State on Friday, featuring a balanced attack with both Amber Rolfzen on the right and the Husker middles hitting a high number and producing kills. That balance was absent against Ohio State and Nebraska's passing was not on target to setter Mary Pollmiller the way it was against the Nittany Lions.

The youngest team in the history of Nebraska is still working on playing at the same level night in and night out in the Big Ten. A week of practice and a trip to the state of Michigan will give Nebraska the chance to find its consistent stride, but if it fails to, Michigan State is more than capable of pulling off the upset.

The Spartans are dealing with their own youth growing pains, with freshman setter Rachel Minarick, who is still working on her connection with her hitters. Michigan State dropped its road match with Michigan last week before beating the Wolverines at Jension Field House last Friday behind 26 kills from Chloe Reinig. The sophomore left side was phenomenal in both matches against the Wolverines, but if Minarick cannot spread around the attack, the Spartans will struggle to get past the Huskers.

It is commonplace in the first few weeks of the Big Ten season for teams to be finding their identity for the remainder of the year. Nothing will be decided in the first six matches of conference play, however this week will play a large part in who these teams will become for the rest of the season. The matchups are not what is important, but it remains to be seen whether Northwestern or Ohio State can build off early success; if not, and they both fall into damaging habits, it could result in a finish in the bottom half of the Big Ten.

Both teams have tough draws on Wednesday night, with a road trip to Penn State for the Wildcats (see above) and a home match against Illinois for the Buckeyes. No matter the outcome of those two matches, Saturday is a match that both teams will approach with the mindset that they can win and likely need to win. Splitting a Big Ten week is considered by many coaches to be a successful one, especially if you are on the road. Either one of these teams could be above or right at .500 in the standings on Sunday, and more likely than not, Saturday?s match will be the more telling of the two for both teams.

A lot of Saturday?s matchup will depend on the performances from Wednesday night, but Northwestern will need Symone Abbott to produce and Katie Dutchman must have success blocking what has become a formidable Buckeye attack. Ohio State will look for a similar effort from Campbell, Sekinger and Mitchell, because if those three can play the way they did against Nebraska, the Buckeyes will be a contender for the rest of the fall.

The setter matchup will, as per usual, play a vital role. Taylor Tashima has transformed Northwestern while Taylor Sherwin appears to have turned a corner. Both setters will depend on the team?s passing but these two are capable of altering the course of a match based on their play.