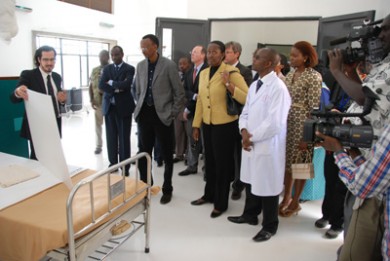 This year marks a grim anniversary for the African nation of Rwanda. Twenty years ago, extremists from the country?s Hutu ethnic group massacred somewhere between 500,000 and 1 million people in less than four months.

Already one of the poorest countries in the world, this period crippled Rwanda?s fragile healthcare system. Scarce basic resources and overwhelming poverty - 45 percent of Rwandans live on less than $1 per day - resulted in countless preventable deaths beyond those caused by the genocide.

Dr. Peter Drobac, an alumnus of the University of Wisconsin, felt called to help. After his medical education and residencies, he focused on the healthcare needs of the global community, first in Haiti and Peru, and finally in Rwanda.

Drobac has lived in rural Rwanda since 2005 and works with Partners In Health (PIH), a Boston-based global health initiative with operations throughout the world.

As Rwanda slowly began to rebuild, Drobac and his team at PIH worked with the Rwandan government to support some of the country?s most distressed areas. Over the past 10 years, Drobac and PIH have provided nearly one million Rwandans with modern, high-quality medical care.

Perhaps the best tangible example of the kind of work they?re doing is the Butaro District Hospital, which opened in 2011 under Drobac?s leadership. He wrote on the PIH Web site that the hospital?s opening was his ?proudest day,? and also made it clear why the need there was so particularly great.

?They chose Burera because its desperately poor healthcare infrastructure was most deserving of attention,? he explained. ?Difficult roads. No electricity. One doctor serving nearly 350,000 souls. Women dying in childbirth on boats trying to reach the nearest hospital.

?If we succeed in Burera, they told us, we can succeed anywhere.?

Rwanda?s healthcare infrastructure has continued to develop, and PIH now has three hospitals and more than 40 health centers staffed by 4,500 community workers throughout the country. Drobac plans to work with PIH in Rwanda for the foreseeable future, transitioning PIH from a direct provider of patient care into a more advisory role.

Two decades after the worst tragedy in that nation?s history, PIH reports that Rwanda is today considered a positive example of how countries can recover from tragic events.

?I am convinced that no other field in medicine is as consistently challenging or as relentlessly rewarding as global health,? Drobac said in a recent interview. ?Global health gets to the very core of what it means to be a physician - to serve the sick and the poor, and to link that service to research, teaching and advocacy.?