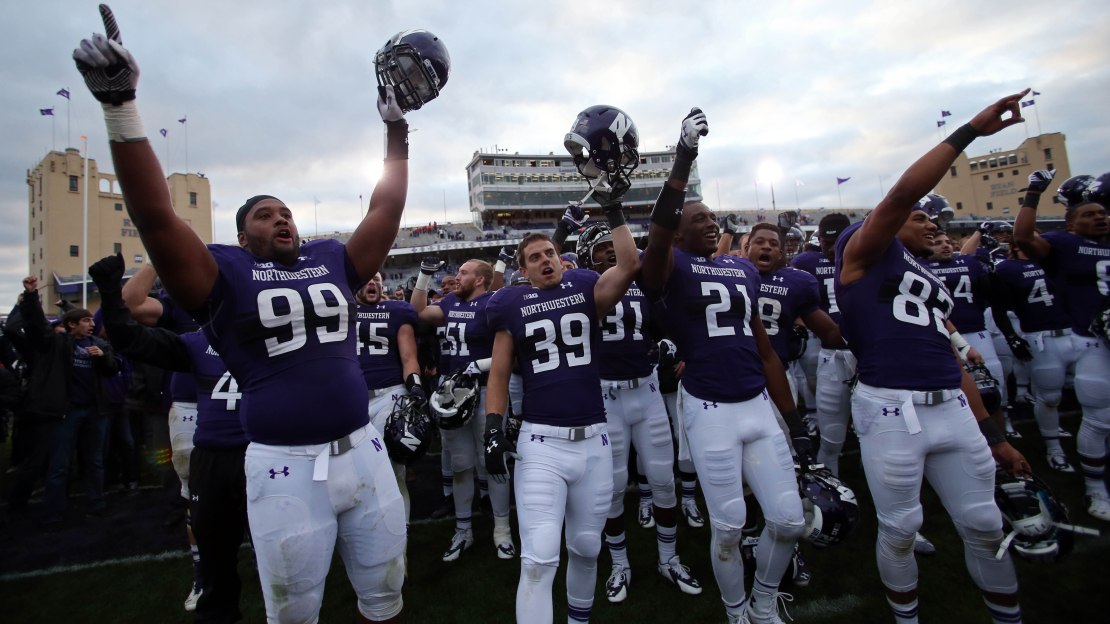 Week 6 is in the books, complete with a big win by Michigan State. And the feel-good vibe continues for Rutgers, while Purdue tastes Big Ten victory for the first time since 2012.

Here?s a wrap of the day?s action.

Biggest surprise: Northwestern. Two weeks, two big wins. First, the Wildcats dumped Penn State in State College, Pa., 29-6. This week, they tripped Wisconsin, 20-14. If you?re scoring at home, NU is 3-2 overall and 2-0 in the Big Ten. And, it?s doing it with the best defense you?ve never heard of.

Biggest disappointment: Illinois. The Fighting Illini needed to show something vs. a visiting Purdue team that hadn?t won a Big Ten game since 2012. Alas, Illinois flopped. The offense did its part, generating 515 yards. But the defense couldn?t contain what statistically was the worst offense in the Big Ten entering the day, as the Boilermakers had 551 yards after averaging 312.0.

Play this again: Rutgers? 26-24 win over Michigan had lots of ebbs and flows and back-and-forth fun. The game could have gone either way. Mix in the drama of Michigan with the excitement of Rutgers with a mix of a controversial call, and you have the makings of a fun game.

Never play this again: Indiana?s 49-24 win over North Texas was little more than a glorified exhibition. But, that?s what the Hoosiers needed. But, it wasn?t compelling.

Best play: Ohio State?s Michael Thomas made a spectacular grab in the corner of the end zone, leaping and coming down with two feet in to haul in a J.T. Barrett pass. Just beautiful.

Northwestern. Remember when the Wildcats opened the season with home losses to Cal and Northern Illinois? Seems like a hundred years ago. Look at NU now, all sparkly and riding a three-game winning skein while sitting atop the West standings. This looks nothing like the team that was 1-9 in the 10 games before this hot streak.

Purdue. The Boilermakers may have found something in QB Austin Appleby, who led the program to its first Big Ten win since 2012. The sophomore hit 15-of-20 passes for 202 yards with a touchdown. He also ran seven times for 76 yards and two scores in place of Danny Etling, who had made the previous 12 starts.

Rutgers. One win. That's all that separates the Scarlet Knights from bowl eligibility, this after Saturday night's exciting win vs. Michigan. Just think of what could be if the Scarlet Knights had found a way to beat Penn State in September before falling, 13-10? An amazing debut continues for RU.

Michigan. It?s going from bad to worse for the Wolverines, who fell 26-24 at Rutgers. The Wolverines have lost three in a row to fall to 2-4. The team showed some heart and fight after a trying week. Still, the effort was for naught. Will Michigan become bowl eligible?

Wisconsin. The No. 17 Badgers look disjointed on offense, thanks to an unstable quarterback slot. Tanner McEvoy started but gave way to Joel Stave. It didn?t matter, as the Wisconsin signal-callers combined to hit 12-of-29 passes for 138 yards with a touchdown and four picks in a 20-14 loss. That ended the Badgers? three-game winning streak.

Maryland. Are the Terps still a sleeper in the East? I thought they were before Saturday's first Big Ten home game vs. Ohio State, although I'm not so sure following the 52-24 defeat. The defense continues to struggle, and that's going to an issue moving forward.

Ohio State QB J.T. Barrett. The redshirt freshman continues to get better. He completed 18-of-23 passes for 267 yards and four TDs at Maryland. Barrett also ran 16 times for 71 yards and a score to help OSU to 533 yards and 52 points.

Rutgers QB Gary Nova. The senior is coming on. He hit 22-of-39 passes for a career-high 404 yards with three TDs vs. Michigan. The last two games, he has completed 36-of-60 passes for 695 yards with seven TDs and just one pick.

Northwestern DB Godwin Igwebuike. He picked off three Wisconsin passes to help the Wildcats notch a huge home victory vs. No. 17 Wisconsin.

Wisconsin RB Melvin Gordon. He did all he could vs. Northwestern, running 27 times for a career-high 259 yards. Alas, it wasn?t enough, as the Badgers lost at Northwestern.

Michigan State?s Jeremy Langford. He ran for over 100 yards (111) for the ninth Big Ten game in a row, as he was the backbone of the offense vs. Nebraska. He continues to play better each week.

Indiana QB Nate Sudfeld. He bounced back from a rough game last week to complete 23-of-29 passes for 230 yards and three scores.

12, times Ohio State has scored at least 50 points since 2012. That?s more than any other league school in that span.

168, points scored by Ohio State since it lost at home to Virginia Tech.

9, catches for Nebraska?s Jordan Westerkamp, which went for 158 yards.

180, rushing yards for Indiana?s Tevin Coleman, with a TD. He now has rushed for 100 yards in seven games in a row (the longest such streak in America) and scored a TD in a school-record 14 consecutive games.

312.0, Purdue?s total offense per game, which ranked last in the Big Ten. But the Boilermakers ripped off 551 yards at Illinois.