Michigan State tops Nebraska, proves it is still the best in the Big Ten 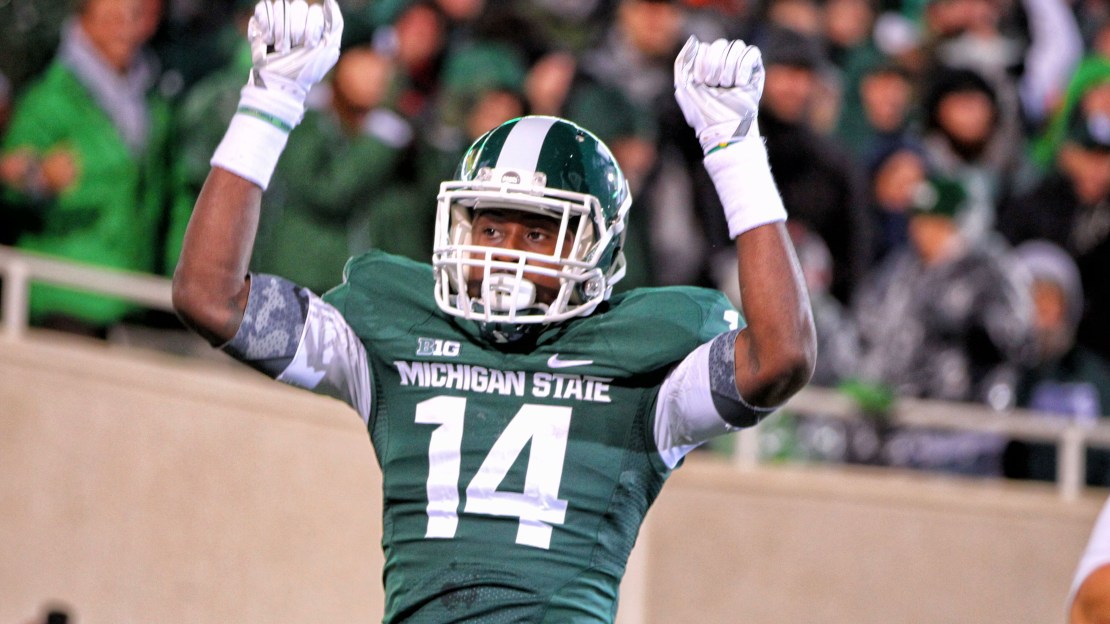 EAST LANSING, Mich. — For Michigan State, Saturday was all about sending a message. And, the message was loud and clear: The Spartans are still the best team in the Big Ten.

Nebraska certainly isn?t going to argue that notion. Not after getting thoroughly dominated on this cold and wet night in absorbing a 27-22 loss. Pick an area of the game, any area, and the Cornhuskers were beaten in it.

Yes, Nebraska made a late run with 19 fourth-quarter points to close a 27-3 deficit vs. a MSU team that seemingly had grown disinterested. It all was too little, too late. Say goodbye to that unbeaten record, Huskers. Say hello to the reality of continuing to look up at Michigan State, like the rest of the Big Ten.

That?s what tonight was about–Big Ten pecking order. These sure looked like the two best teams in the conference through the first month or so of the season. The Huskers were 5-0, the lone perfect Big Ten team. The Spartans were 3-1, the one blemish being a loss at No. 3 Oregon. By the time Mark Dantonio jogged off the field with a red, runny nose on this too-cold-for-early-October night, the verdict was clear.

The Spartans led 7-0 after one quarter and 17-0 at halftime, when the game essentially looked over. Michigan State was ultra-motivated to stymie this high-flying Nebraska offense, which entered the game No. 1 in the Big Ten in total offense (572.6 ypg) and No. 2 in scoring (45.4 ppg), with the rushing attack being the strength as it ranked first in the conference (354.8 ypg).

That prolific offense gave the Huskers hope, as did the last three meetings with MSU. Yes, the Spartans won last year in Lincoln, but Nebraska was 2-1 vs. Michigan State since the Huskers joined the league. And Nebraska had had success moving the ball on the ground in those games. To wit: The Huskers ran for an aggregate 685 yards in the last three games vs. the Spartans, an average of 228 yards. But in a battle between the two best offenses in the Big Ten, it was the ?SpartanDawg? defense that sent a message tonight.

?I would say as a defense we made a statement, on defense we looked tremendous from start to finish,? said MSU quarterback Connor Cook. ?I feel on offense we did not play well, including me, obviously with the completion percentage. We have to execute the run game; we have to execute the pass game. I feel defensively we took 10 steps forward; offense we kind of took a couple of steps back. That's why there is next week. We have a week to improve, we will go to the film room, and we will correct our errors, execute better and develop a better game plan for next weekend. We will be ready to be productive.?

Nebraska finished with 329 yards, with 282 coming through the air and just 47 on the ground. And those turnovers that were such an issue last year? They were again on this night, as Nebraska had four. Hey, that?s one better than the Huskers had last year vs. the Spartans.

Star Nebraska running back Ameer Abdullah entered tonight with a Heisman-worthy resume that glistened with a national-best 833 yards rushing, including two straight 200-plus yard performances. But he was bottled up and shipped back to Lincoln with just 45 yards on 24 carries. That comes out to 1.9 yards per carry. His Heisman hopes? I guess they are still alive, but they have been damaged.

But this wasn?t about Heisman races. This was about flexing muscles. And Michigan State struck another powerful pose on a tough night for a tough team. The Spartans continue to be the ?it? program, coming off a 13-1 season last year and opening 4-1 in 2014.

Michigan State found a way to win a game it didn?t play that well in. Cook was off, hitting just 11-of-29 passes for 234 yards with a touchdown and an interception. But Jeremy Langford came to the rescue with 29 carries for 111 yards rushing with a score. And Tony Lippett continued to make a case to be one of the Big Ten?s best players, running 32 yards for a score and catching three passes for 104 yards and a TD.

Don?t tell Dantonio I am typing this, but the Spartans should cruise through their next three opponents (at Purdue, at Indiana, vs. Michigan) before Ohio State comes to East Lansing on Nov. 8. If you thought this Nebraska-MSU game was big, wait until you get a load of that OSU-MSU clash, which is the lone contest vs. a ranked team left on the Spartans? schedule. That?s what made tonight?s game so vital-MSU needed a quality win. And, it got just that.

No. 10 Michigan State didn?t just win, it crushed an unbeaten team that was ranked No. 17. The Spartans probably need to continue such a pattern of not just winning-but winning impressively-vs. a schedule that likely won?t impress members of the playoff committee. Bottom line: style points count. And there was a lot of style-along with plenty of the gritty substance that has come to define Spartan football under Dantonio?s stewardship–in this triumph for Michigan State.

?Nebraska definitely came out and challenged us,? said MSU defensive end Marcus Rush. ?Ameer Abdullah, Coach Bo Pelini, they challenged us that we couldn't stop the run. We came out and we did that. So I am proud of our defense, there were a lot of sudden changes. We did our job and we answered back.?

And in doing so, Michigan State sent this loud statement to the rest of the Big Ten: We are the best. Who is gonna stop us?