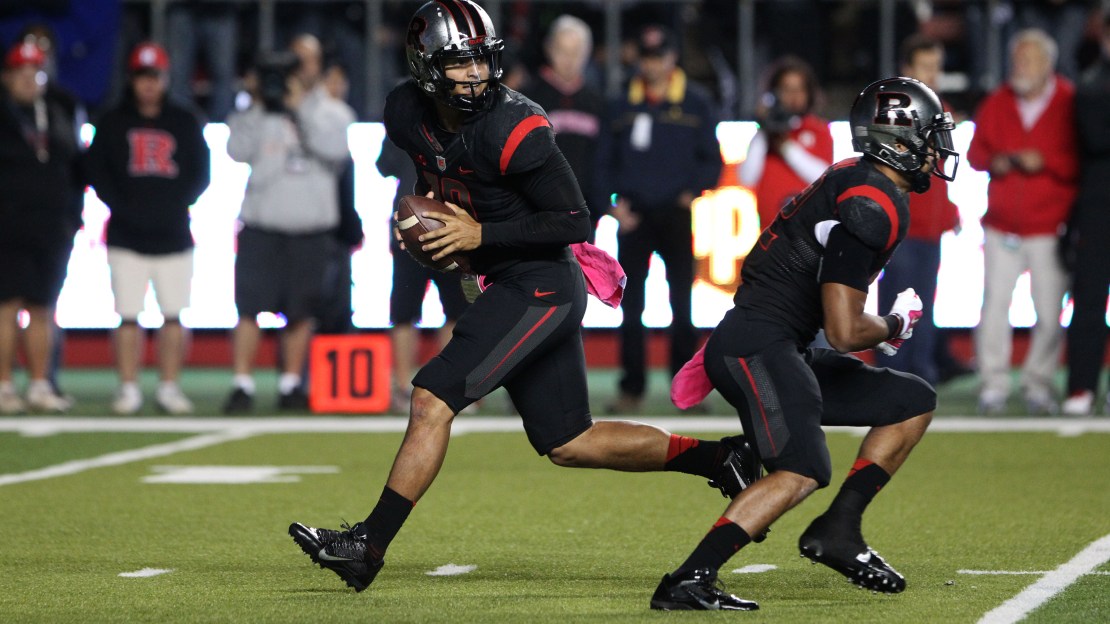 It was an outstanding weekend of Big Ten football, highlighted by Michigan State's 27-22 victory over Nebraska in a top-20 showdown, and there were plenty of exceptional individual performances on both sides of the ball.

1. Gary Nova, QB, Rutgers. Nova was phenomenal in Rutgers' 26-24 win over Michigan at High Point Solutions Stadium. The Scarlet Knights' senior quarterback threw for a career-high 404 yards and three touchdowns while leading Rutgers to its first win as a member of the Big Ten.

2. J.T. Barrett, QB, Ohio State. The Buckeyes' redshirt freshman QB continues to improve on a weekly basis. He was outstanding again on Saturday in Ohio State's 52-24 victory over Maryland. Barrett completed 18-of-27 passes for 267 yards and four touchdowns in the win. Barrett has now thrown for 1,354 yards and 17 touchdowns in five games this season. What a talent.

3. Melvin Gordon, RB, Wisconsin. Who would have thought that Gordon would rush for 259 yards and a touchdown, and the Badgers would lose? That was the case on Saturday, despite a phenomenal individual performance from Wisconsin's star running back. Gordon's 259 rushing yards was the eighth-best all time rushing performance in school history.

4. Godwin Igwebuike, S, Northwestern. This guy had a career game in the Wildcats' 20-14 upset win over Wisconsin. Igwebuike, who is a redshirt freshman, had eight tackles and three interceptions in the Wildcats' victory. He became the first Northwestern player with three interceptions in a game since Neil Little did it against Indiana on Nov. 10, 1973.

5. Akeem Hunt, RB, Purdue. Hunt had a breakout game in Purdue's impressive 38-27 victory over Illinois. The senior halfback rushed for 177 yards and a touchdown on the ground, while also catching four passes for 22 yards in the win. Hunt helped the Boilermakers break a nine-game Big Ten losing streak.

6. Justin Jackson, RB, Northwestern. Jackson has established himself as the lead back in the Wildcats offense, and he was incredible on Saturday in Northwestern's 20-14 upset win over Wisconsin. The true freshman back carried the ball 33 times for a career-high 162 yards, while leading the Wildcats to their third straight victory. Jackson became the first true freshman back at Northwestern to rush for 100-plus yards in a game since Tyrell Sutton did it back in 2005.

7. Frankie Williams, DB, Purdue. There isn't a player throughout the conference who had a more "complete" game than Williams on Saturday. The Boilermakers' junior cornerback had a game-high 12 tackles, 1.5 of which were for a loss, a fumble recovery and a sack in a 38-27 victory over Illinois.

8. Mike Dudek, WR, Illinois. How special has this guy been this season? Dudek hauled in a game-high eight catches for 200 yards in Illinois' 38-27 loss to Purdue on Saturday. Through six games, this freshman wideout has already totaled 33 catches for 539 yards and three touchdowns.

9. Shane Wynn, WR, Indiana. Wynn had a huge game in Indiana's commanding 49-24 win over North Texas. The Hoosiers' senior wide receiver had his best game of the season, catching five passes for 127 yards and two touchdowns. The scores came on plays of 45 and 74 yards. This guy is a big play waiting to happen.

10. Jeremy Langford, RB, Michigan State. Langford was outstanding last week, and the Spartans' senior back was at it again on Saturday. He carried the ball 29 times for a game-high 111 yards and a touchdown in the Spartans' big 27-22 victory over Nebraska. Langford has now rushed for 100-plus yards in nine straight Big Ten games.