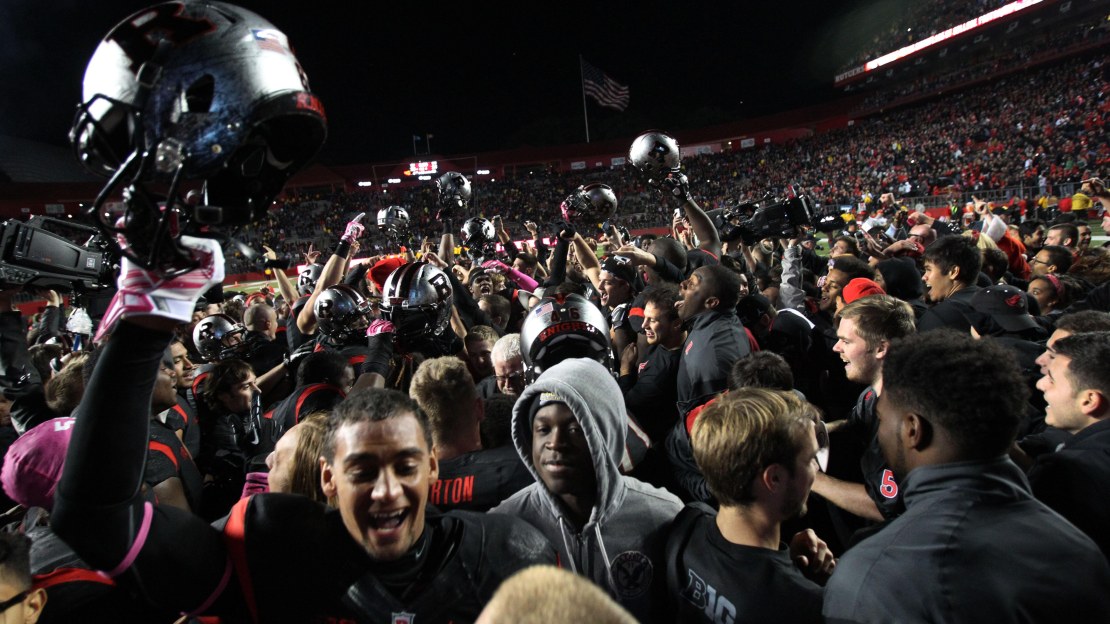 How did Rutgers fans celebrate their first Big Ten win? They stormed the field.

Seconds after the Scarlet Knights held on to beat Michigan, the nation's all-time winningest program, the fans poured onto the field to celebrate with the team. It was a nice scene – even if the fans wish they could have done it in the Big Ten opener last month vs. Penn State.

The Scarlet Knights (5-1, 1-1) lost their Big Ten opener in painful fashion, as the Nittany Lions rallied for a 13-10 win in a game Rutgers led most of the way.

Rutgers is off next week before visiting surging Ohio State on Oct. 18.

(AP) Gary Nova threw for a career-best 404 yards and three touchdowns and Rutgers added to slumping Michigan's woes with a 26-24 victory on Saturday night.

Nova found Andrew Turzilli on scoring passes of 80 and 14 yards and hit John Tsimis with a 7-yarder as the Scarlet Knights (5-1, 1-1) won their first Big Ten Conference game and sent Michigan (2-4, 0-2) to its third straight loss.

The 2-4 start is the worst for Michigan since it opened 2-7 in 2008 under Rich Rodriguez. The setback also capped a troublesome week for coach Brady Hoke, who was under the microscope for failing to remove sophomore quarterback Shane Morris last weekend after a hit to the head.

Michigan had a chance to win but a wind-aided 56-yard field goal by Matt Wile was blocked by Kemoke Turay with 3:01 to go.