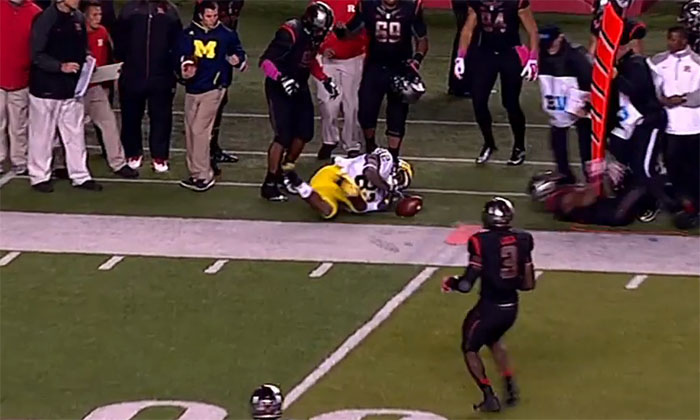 In this day and age, we have not heard the last of Amara Darboh's catch that was ruled incomplete Saturday night at Rutgers. Trailing 26-24 with 3:12 left, Michigan was driving for either a potential go-ahead touchdown or field goal when Devin Gardner found Darboh near the sticks for what looked like a third-down conversion.

The first referee ruled the play a catch, but a second came in and waved it off. The officials met, and the play was ultimately ruled an incompletion.

"It looks like he makes the catch," BTN color analyst Glen Mason said. "And he gets two feet down, and then the ball comes out when he hits the ground. I feel like that's a catch."

BTN studio analyst Gerry DiNardo said, according to the rule book, Darboh didn't "complete the catch," and that it was hard to overturn the ruling once it was called an incompletion.

So, Brady Hoke and Michigan sent out the field goal unit to attempt a go-ahead 56-yard field goal.

It was blocked by Kemoko Turay, who has made a habit out of blocking kicks.

Rutgers is off next week, and Michigan hosts 4-1 Penn State at 7 p.m. ET Saturday night. The Wolverines and Nittany Lions combined for a thrilling quadruple overtime decision last season that went the latter's way.