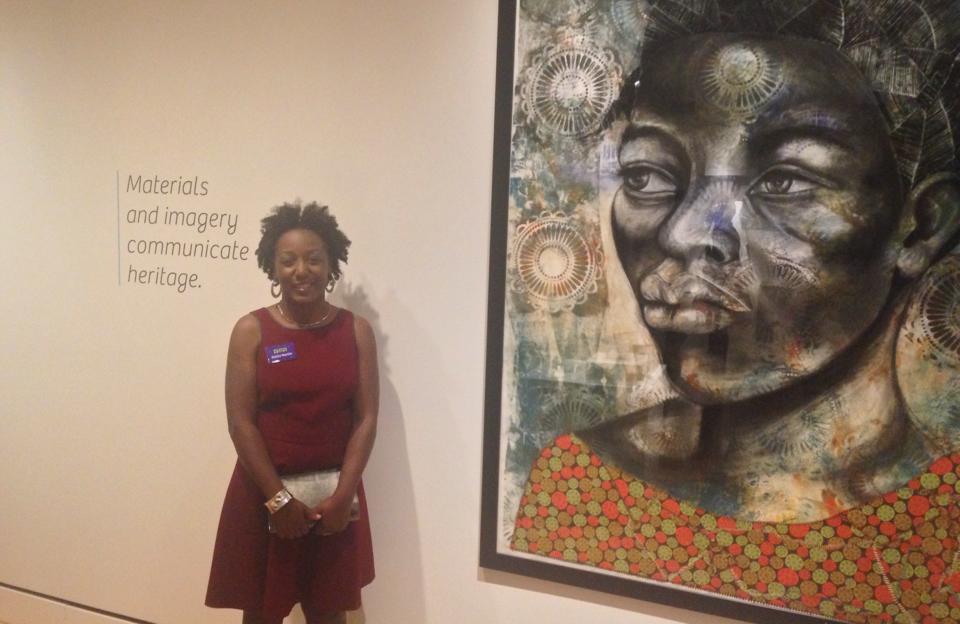 When Delita Martin earned her Bachelor of Fine Arts degree from Texas Southern University years ago, she wasn?t sure what she wanted to do with her life. For a while, she was an independent artist with a ?day job? on top of that. But she wasn?t satisfied with either the knowledge she had to apply to her work or with the direction her career was headed.

?I knew I wanted to go into print-making, but at Texas Southern we never had enough students for a print-making class,? Martin said. ?I found out about the Master?s program at Purdue University, and I contacted Kathryn Reeves and told her I was willing to learn and excited about the art form. I was able to get into the program to pursue that area of study.?

Reeves, a professor of fine arts, printmaking and drawing in the Patti and Rusty Rueff School of Visual and Performing Arts at Purdue, was the mentor Martin was looking for. In addition to being a knowledgeable teacher, she gave personal attention to the development to each of her students, as demonstrated by an experience Martin shared.

?I had a solo exhibition coming up, and I needed to get the work done,? Martin said. ?Kathryn told me not to worry about my class so that I could get my work done. So I was working, and there was class going on, and then the class ended and I was still working.

?So she walks over and takes off her jacket and puts on an apron, and says, ?So what are we doing?? I didn?t want her to know I was about to fall apart, and I said ?Don?t worry, I?m fine.? She said ?Honey, you are not going to make it. So what are we doing?? and she stayed and printed with me until three in the morning. That kind of devotion and commitment to students is something I have taken to heart and are the types of stories I want people to tell about me. I want to pay it forward.?

When Martin received her Master of Fine Arts degree at Purdue University in 2009, she knew exactly what she was doing, and how she was going to do it.

?Purdue was absolutely amazing,? Martin said. ?I learned how to be a professional artist. It gave me a different perspective on my approach to my work.?

Today, she?s a faculty member of the fine arts department at the University of Arkansas, Little Rock. She?s also an accomplished artist who is using her passion to tell a remarkable story - the reconstruction of the identity of African-American women in the United States by displaying the signs, symbols and language used in their everyday life.

?My work allows me to talk about - from a female perspective - the importance of African-Americans within our community,? Martin said.

And that work is getting noticed. In 2011, Martin received an Emerging Voices award for Distinguished Alumni from Purdue. More recently, the Arts and Science Center for Southeast Arkansas had an exhibition this summer that featured various pieces of her mixed-media art. Titled ?I Come From Women Who Could Fly,? the show centered on the creative thread running through Martin?s career: capturing the essence of African-American women.

Additionally, three works from that exhibition were selected for the State of the Art: Discovering American Art Now exhibit at the Crystal Bridges Museum of American Art in Bentonville, Ark.

Martin enjoys seeing how audiences interact with her art.

?I know I have been successful when someone walks into a gallery or museum and looks at my work and they are able to connect with it,? she said. ?I call that a conversation, when you walk up to a piece of art and have a conversation with it. Not all of us have the same background or upbringing. When a non-African-American person can relate to the piece, or be touched by the piece, they are having a conversation with it, and at that point I know I have been successful.?

After a long personal journey, Martin has discovered her art form, and knows the message she wants to deliver.

?When you think about the stereotypes black women have endured since the early 1800s, there is this preconceived notion of the deterioration of the family structure in the black community,? Martin said. ?The idea of black women as nannies, dealing with other people?s families rather than taking care of their own. Black women have loved their families since slavery but the opportunity wasn?t there to show that. My art allows me to show the importance of black women in the family structure.?