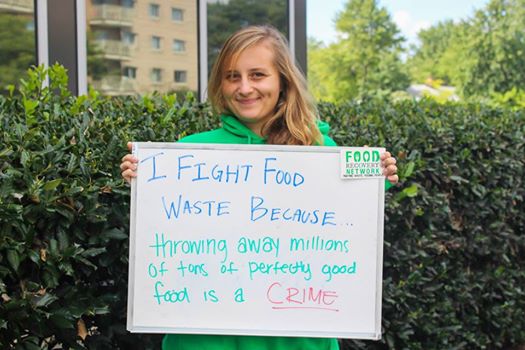 The Food Recovery Network (FRN), a national organization committed to saving food that can be used to feed the hungry, was started in 2011 by students at the University of Maryland. But the roots of FRN extend beyond College Park, all the way to the former Soviet Union.

Mia Zavalij, a co-founder of FRN along with current Executive Director Ben Simon, was born in the Ukraine. Though her family moved to the United States when she was three years old, she came to understand many of life's hardships at an early age when she returned for visits. "Whenever I went back, [relatives] told me stories," she said. "I remember my great grandfather telling me about Soviet soldiers dumping hundreds of pounds of food in the river to force a famine on the Ukraine."

Those kinds of childhood experiences made Zavalij more attuned to inequities in her new home country.

"Seeing people who weren't as fortunate as we are in the U.S. opened my eyes to social causes," she said. "We have hungry people in this country, so why throw any good food away?"

Zavalij and Simon met as undergraduates while taking part in another student organization at the University of Maryland. The two soon discovered they had a common interest: keeping perfectly good food out of the garbage.

"We saw food being wasted at a dining hall and were like 'Okay, we need to do something about this,'" she remembered. "So we got started."

What they started was a network on campus to save food from being wasted. By organizing students to recover leftovers, FRN delivered more than 30,000 meals to Washington, D.C.-area shelters in its first year.

The organization grew quickly from there, and the work it was doing soon attracted more students, such as Camila Pascual.

"I was working at one of the diners at the University of Maryland, and had asked my manager about saving wasted food," Pascual said. "I was told there wasn't really anything we could do, and I accepted that at the time. But the first night Mia and Ben came to recover at the dining hall, I asked what they were doing. When they said they were donating the food, I got involved immediately."

In 2013, FRN was restructured as a national organization. It currently has chapters on 95 college campuses in 26 states. Thanks to consistent, passionate leadership since its founding, the Network continues to grow.

Today, Zavalij serves as secretary of FRN's national board of directors and performs a variety of other tasks. Pascual is still a student at Maryland, but fills a number of roles with the national organization, working largely in fundraising and development with Zavalij.

Along the way, they've both been part of pivotal events in FRN's expansion.

"In 2012, we won the Do Good Challenge at the University of Maryland," Zavalij said. "The grand prize was $5,000, and there was a lot of excitement around getting press coverage and our first big recognition. We went on to win a $15,000 grand prize [in the Ashoka Banking on Youth Competition], and after that we just continued to have momentum."

Pascual recalled an epiphany she had after seeing the direction and impact of the organization come together in a single night.

"I attended one of our first board meetings to discuss a national strategy," Pascual said. "We were talking about five years into the future and our goals, and afterwards we went on a recovery after a football game. At the end of night, we had over 500 pounds of food filling two cars.

"That was a big moment," she added. "Tying together a vision for the future and then an enormous recovery made me realize that this is going to be something big."