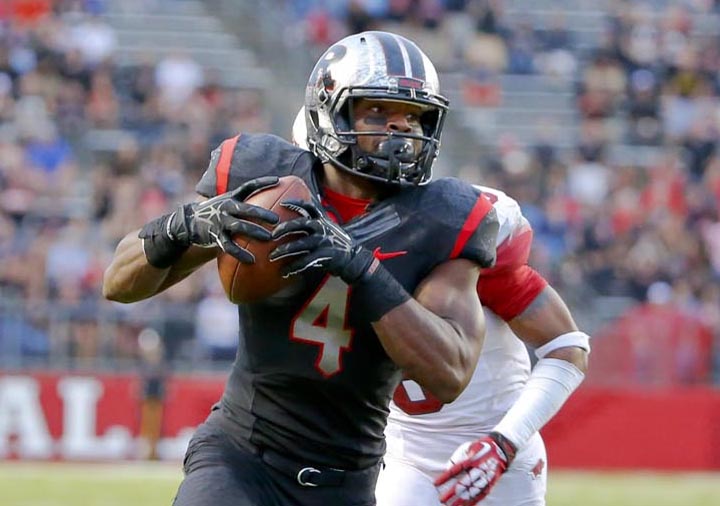 The Big Ten isn?t loaded with lots of great receivers. But when a roll call of the top ones is made, you have to include Rutgers Leonte Carroo. He?s going down as one of the best in school annals.

Steve Politi of NJ.com says that Carroo might not have the freak physical skills of Kenny Britt or the durability of Mohamed Sanu, two former Rutgers stars at the position who are playing on Sundays. But he has the complete package: Great hands, breakaway speed and powerful arms, and maybe above all else, a knack for making the difficult catch look easy.

Carroo is the one player who could make the jump to the NFL after his junior season, not that he's entertaining the thought now.

Tim Beckman is in his third season coaching Illinois. The results thus far can at best be described as ?mixed.? Beckman has one Big Ten victory in two-plus seasons-and that came last year at Purdue. Well, the Boilermakers are coming to Champaign this Saturday, and Beckman needs to win at a place where 16 of the last 19 regular seasons have ended .500 or below.

I am here to offer multi-media options for your enjoyment. Here is a nice podcast from the great Bob Flounders of Pennlive.com, who looks at what happened to Penn State vs. 11-point underdog Northwestern.

Well, I can tell you this: The PSU offense struggled, and it struggled mightily. And I don?t think the offensive line will be fixed anytime soon. The fact this team started 4-0 is impressive-and amazing.

Speaking of games gone by, Indiana QB Nate Sudfeld explains in this video what went wrong for the Hoosiers in their home loss to Maryland.

At the top of my list: The offense flopped. IU isn?t passing the ball like it has in the past. Sudfeld needs to pick up his game. You?d think with how well Tevin Coleman is running that Sudfeld and Co., would have plenty of room to throw the ball.

Interesting column from Nick Baumgardner of Mlive.com. He points out that almost five days have passed since the Minnesota game and subsequent mishandling of the Shane Morris situation, and the public still hasn?t heard spoken words from Michigan A.D. Dave Brandon and president Mark Schlissel, the two most powerful people on the campus. They have issued statements-but not faced reporters. When will it happen? Brady Hoke has talked to the media directly. The players have, too.

Listen to Hoke and the other 13 coaches on the weekly Big Ten football teleconference:

On the field, Michigan has a big game at Rutgers. It sounds like Devin Gardner is focused and sharp. And he remains a leader, which is what this team needs during these trying times.

"I see Devin responding to any type of adversity, whether it's a game or a practice," Michigan running back De'Veon Smith said. "There's definitely a change in him. He's focusing even more just because he knows his spot could be replaced.

"He's just more focused, a lot more focused. He's just even more hungry. He realizes his spot could be taken that easily just from one game."

Will Gardner and his teammates rally around the controversy that has surrounded the program? Fascinating.

Huge game for Nebraska, as it treks to Michigan State. And the Huskers will bring a line that?s playing well. That wasn?t the case early in the season, as the front struggled. Turns out an offensive lineman-only meeting after the McNeese State game helped serve as a wake-up call.

How dominant has the line been? In the last three games, Nebraska has rushed for 1,081 yards and averaged 6.5 per carry. I-back Ameer Abdullah has gotten a lot of the attention, but the line has provided the running room after Abdullah struggled against McNeese State.

Amid all the chatter about Iowa?s quarterback situation and inconsistent offense, Hawkeyes defensive coordinator Phil Parker has been a steady force who goes about his business in a successful manner.

Parker?s defense was at its best last week at Purdue. Check it out: Boilermaker quarterback Danny Etling was sacked four times and pressured in the pocket too many times to count during Iowa's 24-10 victory Saturday in West Lafayette, Ind. Etling passed for only 61 yards, with 15 of his 26 attempts falling incomplete. Purdue was held to just 165 yards and punted nine times.

Pretty interesting article on the rising/falling fortunes of college programs, contrasting the fates of Baylor and Purdue since 1999-2000. It has been a stunning reversal of fortunes for the two schools.

This is interesting: Is J.T. Barrett already the third-best quarterback in the Big Ten?

Hmm. Michigan State?s Connor Cook and Penn State?s Christian Hackenberg have to be at the top of any Big Ten quarterback ranking. But, I think I would put Barrett No. 5 behind Wes Lunt of Illinois and Nebraska?s Tommy Armstrong. Still, being No. 6 isn?t bad for a redshirt freshman.