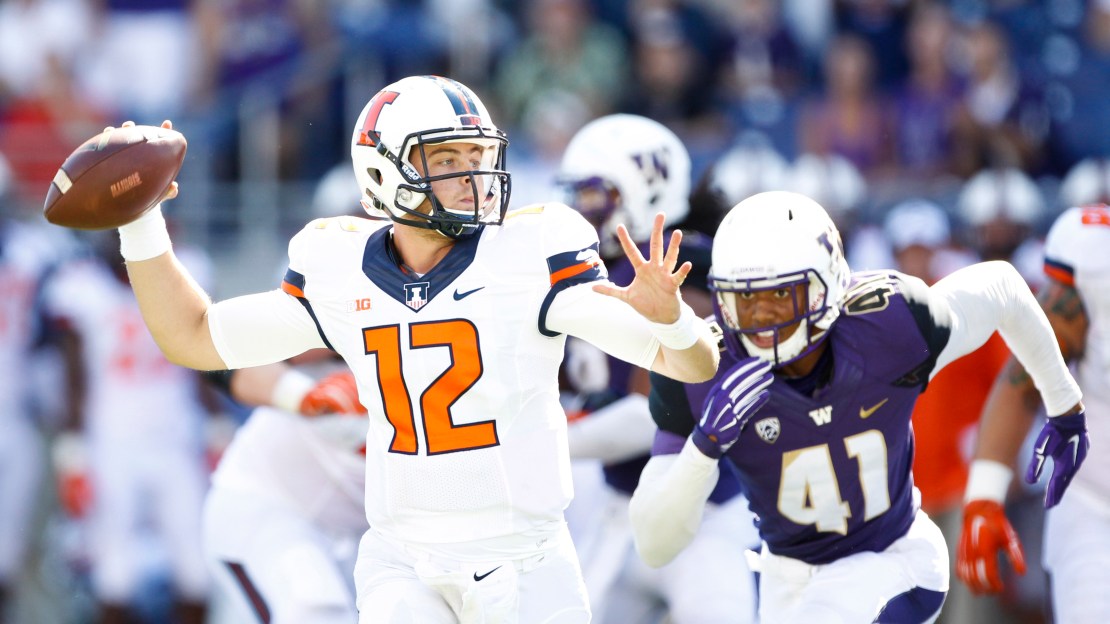 The Nebraska at Michigan State game can?t get here quickly enough. So many good matchups in a game that will go a long way toward determining and shaping the division and league races. Here are five lessons that MSU must apply from the loss at Oregon earlier this season if it wants to prevail vs. the Huskers.

One item: Turn Connor Cook loose. Let him throw on first down, chuck it down field. He can win the game with his big right arm. Really.

This is good news for Illinois: It looks like Wes Lunt will start vs. Purdue this weekend.

Lunt gives this team the best chance to win. It?s vital for Illinois to beat visiting Purdue, as wins may be difficult to come by this season. Illinois beat Purdue last year, the lone Big Ten win in Tim Beckman?s two-plus seasons. Darrell Hazell still doesn?t have a league victory.

Here is all you need to know about the Penn State offensive line: it has one scholarship offensive tackle in its senior, junior and sophomore classes: Donovan Smith.

The rest of PSU's scholarship tackles consist of redshirt freshman Andrew Nelson - the starter at right tackle - and true freshmen Chance Sorrell, Chasz Wright, Noah Beh and Brendan Brosnan. This is why Christian Hackenberg is running for his life.

The Big Ten is loaded with many good running backs, including the likes of Nebraska?s Ameer Abdullah, Wisconsin?s Melvin Gordon and Indiana?s Tevin Coleman, among others. But keep an eye on Maryland?s Brandon Ross, an underrated back.

The Ohio State defense was tested last week vs. Cincinnati. Well, it?s gonna get tested again with a trip to Maryland and its high-flying offense this week.

The Ohio State defense has been under the gun since collapsing late last season. Urban Meyer hired Chris Ash as co-defensive coordinator to overhaul the pass defense, a move widely seen as hardly an endorsement of coordinator Luke Fickell.

?I know we?re going to get a lot better,? Meyer said. ?I?ve not at all given up on our system of play. We?re going to continue to develop players and make sure we?re in the right defense at the right time.?

OSU?s best pass defense may be a fierce pass rush from a primo line. This is gonna be a fun game. I have the Buckeyes on upset alert.

Rutgers blew a chance to score a landmark win earlier this season when it lost, 13-10, at home to Penn State. Now, the Scarlet Knights have another chance with visit from struggling Michigan. It?s a chance for QB Gary Nova to shine after he tossed five picks vs. the Nittany Lions.

Speaking of Michigan-Rutgers, it?s the Wolverines who are bringing down the conference-not the Scarlet Knights, who were perceived by many to not be ready for a big step up to the Big Ten. Funny how life works, isn?t it?

Wisconsin has found a No. 1 wideout in Alex Erickson. But it?s still looking for a steady No. 2 man.

Erickson leads the team with 21 receptions and 256 yards through four games for the No. 17 Badgers, who open Big Ten play at Northwestern on Saturday. Among wide receivers, Erickson has accounted for 81 percent of the group?s receptions and 85 percent of its receiving yards. Junior Jordan Fredrick is next with two catches for 23 yards.

Purdue QB Danny Etling is struggling. A reason why? He?s thinking too much. It could lead to a quarterback change. The Boilermakers blew a chance to beat a very beatable Iowa team last week. If Purdue had gotten even average quarterback play, it may have won. Alas, it lost, as the offense failed to score a TD.

"To me, it's how can you produce the best at that particular time. That's all it's about to me," Darrell Hazell said. "Is it a long-term, short-term, how do we get production out of whatever position? It's not just the quarterback. It's the tight end, the wide receivers, the offensive line. How do you get the best production out of that position group at that particular time?"

Northwestern fans, you want more analysis of the win over Penn State? Here ya go.