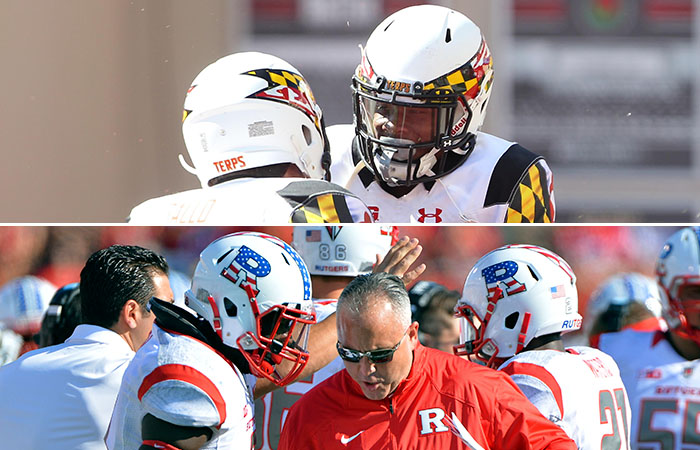 Admit it. You were a bit skeptical when the Big Ten announced that Rutgers and Maryland would be joining the conference.

Neither team had a rich, lustrous history in football. ?Modest? would be an apt description, with some sprinkles of glory mixed in. But the debuts for both schools have been success so far.

Rutgers is off to a 4-1 start and very easily could be 5-0, dropping a 13-10 decision at home to Penn State last month. Maryland also is 4-1. And, like the Scarlet Knights, the Terrapins? lone loss came by three points, this one on the final play of the game, in a 40-37 home defeat to West Virginia.

"It's a pretty good start,? said Maryland running back Brandon Ross. ?We feel we could have very easily been 5-0, but 4-1 is definitely a good start. We are just trying to take it game-by-game and hopefully have success doing that."

Adding even more deliciousness to this storyline of early success for the Big Ten newcomers is the fact Rutgers and Maryland will welcome arguably the Big Ten?s two most storied programs to their campuses on Saturday for what could be season-defining games for the new kids. And it's not crazy to envision Rutgers (vs. Michigan) and Maryland (vs. Ohio State) winning. I never thought I would have typed that back in August.

Rutgers will welcome a reeling Michigan team for a prime-time game at High Point Solutions Stadium. The Scarlet Knights are still smarting from letting the Penn State get away, as the Nittany Lions rallied after RU quarterback Gary Nova tossed five interceptions. Beat Michigan, and Rutgers would further boost its image, confidence and mojo in what could be a special 2014.

Maryland is on a similar path. The Terrapins will entertain Ohio State in their first-ever Big Ten home game. Unlike Rutgers, the Terps were viewed as a potential sleeper team in the rugged Big Ten East. And, so far, Maryland has delivered on that promise with wins over the likes of South Florida, Syracuse and Indiana.

"We have a tremendous opportunity and tremendous challenge ahead of us this weekend,? said Terps coach Randy Edsall. ?We are playing a very talented Ohio State team and a very well coached Ohio State team. Looking forward to the home opener here at Byrd Stadium. I know it is going to be an electric crowd and a packed house. There will be a lot of pageantry with the first home game here. Hopefully, what we can do here is play to the best of our ability and give ourselves the opportunity to get a win on Saturday afternoon."

Maryland has done it with a strong offense. The Terps have scored a total of 184 points in 2014, the third-highest total in the Big Ten. The Terps are averaging 36.8 points, which is on pace for the highest scoring average in school history. But, this isn?t Syracuse, USF or IU. This is Ohio State, the famed Scarlet and Gray of Archie Griffin fame. Can Maryland keep rolling?

"They put on their pants just like we do, so it's just another team that we are looking forward to playing," said Maryland defensive lineman Darius Kilgo. "It is a great opportunity to play Ohio State because of the history, but we are just looking at it as another chance to get another win."

Rutgers will face a Michigan team that is slogging through inconsistency on the field and controversy off the field, losing three games before October for the first time ever. What will be the mind-set of the Wolverines? This is one thing Rutgers can count on, however: Michigan will be the most talented team it has faced this season.

"When you put the film on and watch, they they've got the players that you would think any Michigan team would have," Rutgers quarterback Gary Nova said. "They've got talent everywhere."

And in addition to dealing with that uber talent, the Scarlet Knights must deal with the legacy and history that the Wolverines will bring to Piscataway. Just seeing those famed winged helmets sometimes can intimidate a foe.

"There's no doubt (they're talented," Rutgers coach Kyle Flood said. "Very physically impressive. Big, strong, good-looking bodies up front. The wide receiver, (Devin) Funchess, is as talented of a football player at that position as there is in the country.

If Rutgers wants to reach a bowl, it likely will need to win this game with what has been a successful formula for RU: run the ball with a physical offense and stop the run with a talented front seven. The Scarlet Knights are off after this weekend then play at Ohio State and at Nebraska before coming home to play Wisconsin. Brutal. Following another bye, RU finishes with Indiana at home before going on the road to play at Michigan State and at Maryland.

It all begins this Saturday for Rutgers and Maryland, schools with golden opportunities on their home fields vs. two of the Big Ten?s biggest names and brands. The debuts of the Big Ten newbies could soon get a whole lot better-and more surprising.