Who starts for Iowa, Michigan, Purdue? That & more in Tuesday's links 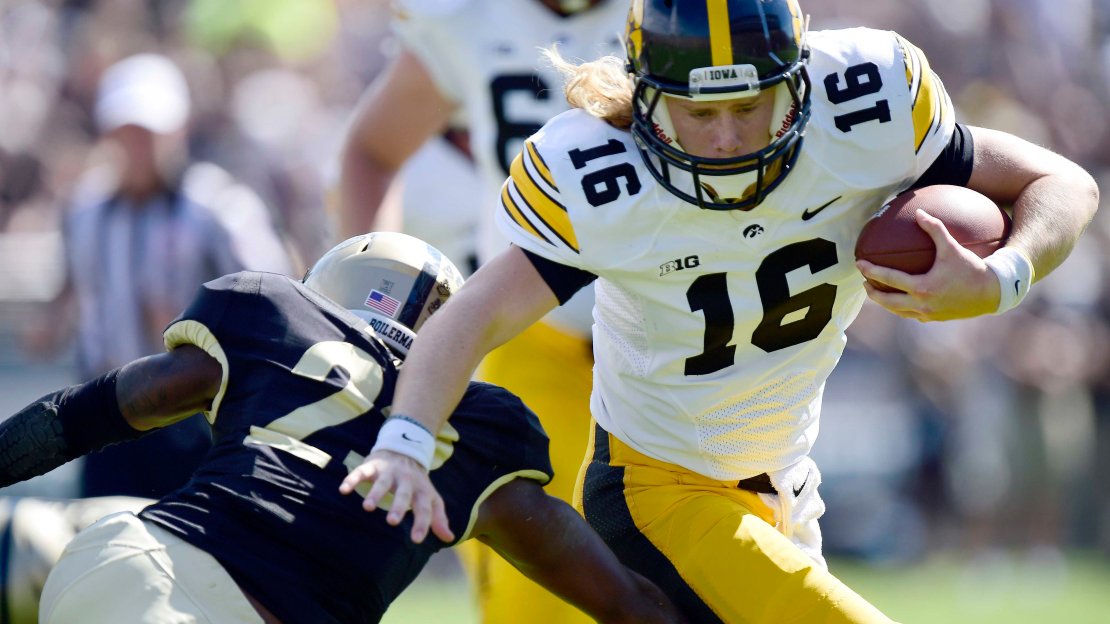 Decisions, decisions for several Big Ten teams under center. Who starts Week 6 games? Let's start in Iowa, where the quarterback debate continues to rage at Iowa. Is this a good thing? A bad thing?

Kirk Ferentz wouldn?t say on Saturday after the Hawkeyes won at Purdue who would be the starter in Iowa?s next game. But, why wouldn?t Iowa again start C.J. Beathard over Jake Rudock? Beathard has energized the offense since taking over in the second half at Pitt two weeks ago and leading the team to victory. Beathard rallied the Hawkeyes again last week. Iowa is off this week, so there is no sense of urgency to make a decision. To me, it?s an easy choice: start Beathard.

On the subject of quarterback decisions, Purdue still hasn?t made one for its trip to Illinois on Saturday.

Sophomore Danny Etling has started the last 12 games, but he struggled in a loss to Iowa last week, hitting 11-of-26 passes for 61 yards with an interception. Etling?s job status looked iffy earlier this season before he quelled doubters. Well, the doubters have remerged.

"I don't want (the QB conversation) to be a weekly thing, we just have to make sure we're improving at every position," Purdue coach Darrell Hazell said Monday. "It's not only him that's being evaluated. That's what everybody sees. But it's every position."

I think it?s time to turn the page on Etling and give Austin Appleby a try. What do the Boilermakers have to lose?

More QB questions: A week later, Michigan is back where it was at with its quarterback spot: undecided.

Shane Morris did little to inspire confidence that playing him would result in better results. Besides, Morris has some health issues. Long story short, it would seem Devin Gardner will be the man when the Wolverines play at Rutgers.

But figuring out who its starting signal-caller will be may be the least of Michigan?s worries, as it has admitted to botching how it handled a concussed Morris in last week?s loss to Minnesota.

Rutgers will be a tough out for Michigan. The Scarlet Knights have been an early surprise, with their lone loss coming by three points at home to Penn State. A big key to RU?s success is a rugged front seven on defense that excels at rushing the passer.

RU?s 21 sacks pace the nation. Kemoko Turay, Darius Hamilton and David Milewski are the stalwarts. How will Michigan?s maligned o-line deal with those guys?

The Penn State offensive line struggled mightily on Saturday in a brutal home loss to Northwestern. So, it?s back to Square One for a thin unit that lacks talent.

Honestly, it?s a bit surprising that this team is 4-1 with this front, as PSU is averaging 3.1 yards per carry and has yielded 14 sacks. Either this group starts to play significantly better, or PSU's offense is going to continue to flounder. Defenses know how to attack this offense.

The struggles of the o-line have put QB Christian Hackenberg in the spotlight. And, he?s been hurt by inconsistency. But he surely feels pressure to make something happen as he works under constant duress.

How bad were things for the o-line last week? One PSU player blocked another. Oh, boy.

I have been impressed by Ohio State redshirt freshman QB J.T. Barrett. He continues to improve each week. But, the QB job will belong to Braxton Miller when he returns in 2015.

No shock, huh? But, OSU has to feel good about its future.

What happened to the Indiana passing game last week vs. Maryland?

The once-vaunted aerial attack has taken a big step back in 2014. Nate Sudfeld, who has dropped to 11th out of the conference's 14 starting quarterbacks in passer rating, was 14-of-37 for 126 yards. David Woods of IndyStat.com notes that two completions totaled 49 yards, and the 12 others averaged just 6.4. Neither Kevin Wilson nor offensive coordinator Kevin Johns said the problems could be attributed to any one thing.

"You name it, we were all a part of it, collectively," Wilson said.

Who wasn?t impressed by QB Mitch Leidner vs. Michigan? It was a big key to victory. Leidner completed 14 of 22 passes for 167 yards and a touchdown. The redshirt sophomore had missed the previous game with a knee and toe injury after throwing three interceptions and losing a fumble in the loss at TCU.

If Leidner keeps it up, the Gophers will be a force to be reckoned with in the Big Ten West.

Last year, Nebraska was doomed in its home loss to Michigan State by five turnovers. The Huskers know that can?t happen again.

"You can't beat yourself, and I saw something last week that John Wooden said," Bo Pelini said. "A lot of times games aren't necessarily won, a lot of times the big games are lost on one side or the other.

"That's what you fight against, being your own worst enemy, and at times we are. That's what we got to fix, we've got to be more consistent."

Entering the season, Wisconsin?s defense was a question. The front seven was being retooled. Well, so far, so good, as the unit continues to develop. The defense ranks in the top 20 nationally in all four major defensive statistical categories: passing defense (18th, 174.5 ypg), rushing defense (ninth, 86.3 ypg), total defense (seventh, 260.8 ypg) and scoring defense (11th, 14.5 ppg).

Jesse Temple of FoxSports.com says Badgers defensive coordinator Dave Aranda has put together a faster, leaner front seven that is creating more pressure on quarterbacks than even a year ago, when the Badgers also ranked in the top 20 in all four major defensive categories. This year's team has 15 quarterback hurries through four games. A year ago, the Badgers tallied 31 quarterback hurries in 13 games. That increase of 2.4 to 3.8 comes as no accident. This defense quietly is becoming one of the better ones in the Big Ten.