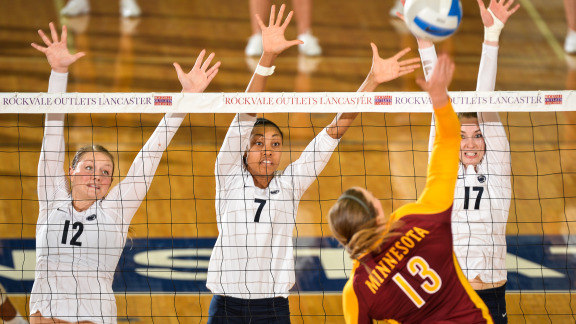 The opening week of conference play is known for its surprises. A year ago, No. 1 Penn State lost to Michigan State on its home floor in a five set match that would be the Nittany Lions' last loss of the season. We expected a few upsets to open 2014 league play, but the surprise ended up being more dominance from the marquee program.

Penn State made a statement against Wisconsin on Wednesday in a rematch of the 2013 NCAA title, winning in straight sets, and then followed it up with an equally impressive performance against Minnesota, controlling the match after dropping the first set.

Senior setter Micha Hancock ran the offense that saw five different players tally at least seven kills in both matches and added her own attack and serve to the mix, as well. The Big Ten may not have given its Player of the Week award and Setter of the Week to the same player in a single week, but if there was a week to do it, it was this one for Hancock (she was named the setter, but not player of the week). The performance of senior libero Dominique Gonzalez for the Nittany Lions also can not be overlooked, as she had 47 digs in two matches, averaging out to 6.7 per set.

Penn State's matches were the only ones that featured ranked opponents, but week two brings several compelling matchups, and likely more surprises.

No two teams in the Big Ten have been hit by the injury bug harder than the Spartans and the Wolverines through the first month of the season.

Michigan State, fortunately, did not lose freshman setter Rachel Minarick for a lengthy period, but freshman outside Holly Toliver and junior setter Halle Peterson are still out indefinitely with a broken bone (foot) and dislocated shoulder, respectively. Head coach Cathy George is far from a settled lineup in East Lansing, but the makings of a solid team are still in place despite the absences.

Michigan?s ailments have been even more of a hindrance to the start of the year. Expected left side starter Kelly Murphy suffered a fracture in her foot two days before the season began and senior All-America Honorable Mention setter Lexi Dannemiller has missed all but the last two matches with mononucleosis. Adding to the Wolverine injury plague is the loss of junior Ally Davis following a knee injury last Friday night against Purdue in the Big Ten opener. Mark Rosen and his staff are still waiting on the official word on Davis' status. It is not only a blow to lose another starter, but Davis was in the midst of a breakout season, leading the team in kills per set (3.33) during non-conference play. Through the turmoil, Michigan is 5-7 and lost two five-setters to open the Big Ten against Purdue and Indiana.

On the bright side for Rosen?s team, Dannemiller is back and Abby Cole has turned into one of the most formidable middles in the league. Michigan will continue to search for answers on the block where youth and a lack of height have kept the Wolverines from slowing many opponents, allowing a Big Ten worst .223 opponent hitting percentage. Freshman Caroline Knop is fun to watch and brings a distinct energy to the team but gives up a lot on the block. Michigan will need to adjust accordingly when teams target the mismatch.

The Spartans have asked for considerably more from sophomores Chloe Reinig and Alyssah Fitterer this season, and the pair has answered in resounding form. Factor in the injuries with the losses to graduation of Lauren Wicinski, Kristen Kelsey and Alexis Mathews, and Reinig and Fitterer had to become go-to players or Michigan State would be in for a daunting Big Ten season. The duo accounted for 53 percent of the team?s kills in the opening weekend of conference play and lead the team in kills (Reinig) and blocks (Fitterer) through 13 matches.

Tuesday represents the first of two meetings this week between the in-state rivals, as with the new conference scheduling this year, each team will play its travel partner twice in the same week. That could benefit the healthier of the two teams, but, as with any meeting between fierce instate rivals, an outcome is impossible to predict.

For the second consecutive year, the Gophers and the Illini will meet just once during Big Ten play, unfortunate for both teams and the fans that won?t see more of what has been a quality series over the years.

This season's lone meeting will take place in the electric atmosphere of Huff Hall, where the Illini are 5-0 this season and haven't lost since the 2013 finale vs. Minnesota.  While Illinois players and coaches may not be focused on that loss, it is a certainty that the Spike Squad has not forgotten and will add to what will already be a hostile road trip for Hugh McCutcheon?s young team.

Minnesota defeated Ohio State in five sets and fell to Penn State in four at home last week to start the Big Ten season. Sophomores are prevalent throughout the lineup, and the performance and numbers have exceeded expectations so far for this group.

Sarah Wilhite has been the clear standout through the season?s first month and has taken enormous steps from her first year with the Gopher program. Wilhite is fifth in the conference in kills per set (3.60) and is second on the team in kills and third in blocks. Increased playing time is a big part of it, but she looks drastically different than a year ago now that she is a regular on the left side versus playing on the right during a portion of last season.

The combination of Wilhite and junior Daly Santana on the left, to go along with Adrianna Nora on the right, and two developing middles in the Tapp sisters, and the Gophers have one of the most balanced attacks in the Big Ten. Factor in to the conversation that Minnesota is the league?s best blocking team (3.01 blocks per set), and the young Gophers are a tremendous challenge for any opponent.

Illinois may consider this match the true start of the Big Ten season, after defeating Maryland and Rutgers to start conference play. The Terrapins and Scarlet Knights will one day reach the level of the rest of the Big Ten, but Friday and Saturday must have felt like another non-conference weekend for the Illini.

The big change from previous years for Illinois is that it is running the 6-2 offense with junior Alexis Viliunas sharing the setter job with sophomore transfer Allison Palmer. The system has worked on several levels, although the play of Ali Stark on the right side has made it easier to stay in the two-setter system.

Liz McMahon and Jocelynn Birks were going to get their numbers, no matter the system, and the Illini still rely on the pair to be the offensive stalwarts in the lineup. However, when McMahon rotates to the back row and Stark plays on the right, Illinois needed to have production from that spot. Stark is averaging nearly two kills per set and hitting .272, to go along with 27 blocks — a boost compared to lackluster offensive numbers in previous seasons. Stark?s play on the right, as well as Palmer?s addition to the lineup and the rise of freshman libero Brandi Donnelly, has made the 6-2 work and got the Illini off to a 10-3 start.

It is interesting to note that Minnesota has defeated Illinois four consecutive times in straight sets, including three wins at Huff Hall in the past three seasons. Overall, Illinois last beat Minnesota on the road in 2011 but has not won a home match in the series since 2009. That match was played in Assembly Hall, which means that the Illini have not defeated Minnesota in Huff Hall since Nov. 7, 2003, a surprising stat considering Illinois? home success in recent years.

It?s Penn State, and it?s Nebraska. Do we need any preamble? That?s the point of this blog, so, yes, we do.

Volleyball fans celebrated when the conference schedule was released this year, and the Nittany Lions and Cornhuskers would be facing each other twice after last year?s inexplicable sole meeting. It?s hard to believe, but these two teams have not played a match with meaning since Oct. 28, 2012 at the NU Coliseum, when Nebraska knocked off No. 1 Penn State in a remarkable five-set affair.

Last year?s meeting at the Devaney Center still had an unbeatable atmosphere and memorable play from both sides of the net, but Penn State had already won the Big Ten title before the Nov. 30 match. Friday will once again have the tension that comes with a match that will play a part in deciding the conference title.

Penn State dispatched Wisconsin and Minnesota this past week behind the play of Micha Hancock and the experience of Nia Grant, Megan Courtney and Dominique Gonzalez. The Nittany Lions may have young players on the floor but last week showed that the seasoned players will be the ones who get it done in big matches.

Nebraska opened up with two wins against Iowa in the travel partner week but likely would have preferred to start with tougher conference competition. The Huskers saw encouraging signs from Amber Rolfzen on the right in the two matches, as she led the team with 3.5 kills per set and hit .571. Nebraska needs the balance after relying too heavily on Kelsey Robinson and Kadie Rolfzen on the left last season. Alicia Ostrander seems to be securing the second left side spot this year and Nebraska is still seeking more offense out of its middles to aid in the balance.

The Nittany Lions hold statistical advantages in most categories over the Huskers coming into Friday?s matchup and have asserted themselves in their first two Big Ten contests. However, Nebraska is the Big Ten?s second-best blocking team at this point, while blocking has not been a strength for Penn State. The Nittany Lions may have turned a corner Saturday, though. After being out-blocked in set one against Minnesota, Penn State won the matchup in the next three sets to out-block the Gophers 15.5 to 9 for the match.

There has not been a match between these two in recent memory that has not had the intensity of a national semifinal or championship match, and Friday is certain to be another anxiety inducing match for players, coaches and fans alike.

Want to watch other Big Ten volleyball matches this week?

The full event schedule is on BTN2Go.com – here's the link. See the schedule below to find out what's coming up on BTN Plus in the next week: