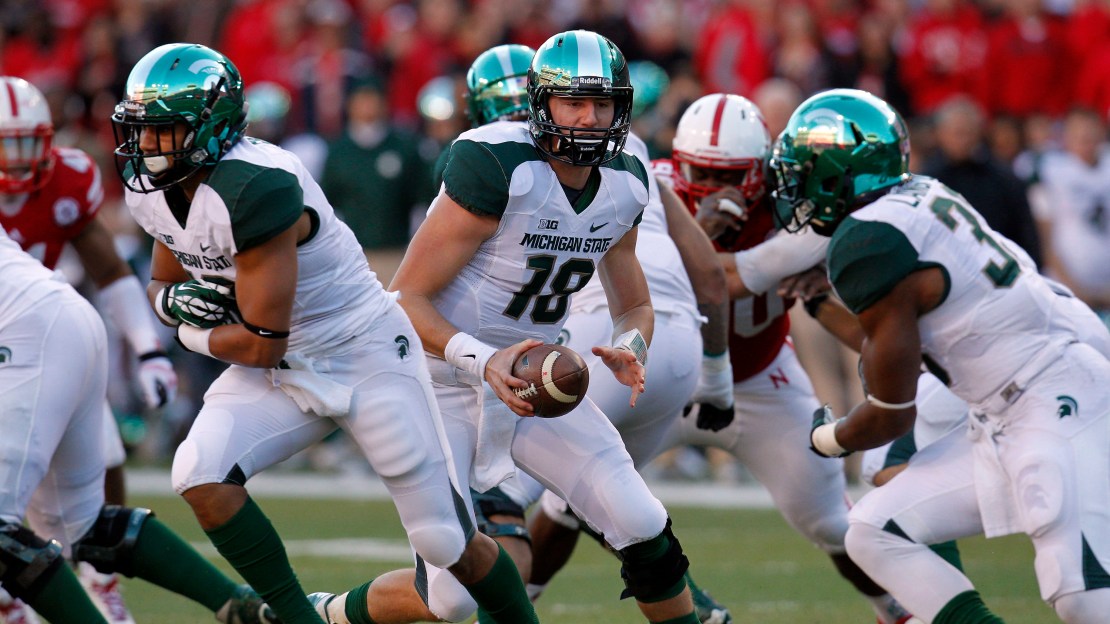 The first week of October brings with it a light menu of games, with just six on tap. But there?s at least one doozy, with perfect Nebraska playing at reigning Big Ten champ Michigan State. The Cornhuskers are the conference?s lone unbeaten team, while the Spartans are the Big Ten?s highest-ranked squad whose lone defeat came at Oregon.

Iowa, Minnesota and Penn State are off during a week in which there are five Big Ten games and one non-conference tilt.

Get my Week 6 previews and game rankings below.

2. Ohio State (3-1, 0-0) at Maryland (4-1, 1-0). The Terrapins are viewed as a Big Ten East dark horse. And a win vs. OSU would validate those thoughts. Maryland?s offense is clicking, ranking fifth in the conference in scoring (36.8 ppg). But its defense was struggling before stepping up in last week?s big win at Indiana by yielding only 332 yards and 15 points (one TD). Still, the Terps are No. 13 in the league in defense (434.8 ypg). The Buckeyes? attack also is playing well, ranking No. 3 in the Big Ten in scoring (42.8 ppg). But also like Maryland, the OSU defense remains a work in progress. The Buckeyes allowed 422 yards overall and 352 in the air vs. Cincinnati. This could be a high-scoring game.

3. Michigan (2-3, 0-1) at Rutgers (4-1, 0-1). Did the Wolverines hit rock-bottom with their 30-14 home loss to Minnesota? This is a program in dire need of a lift, going 4-9 in its last 13 games. There is absolutely no positive mojo around the Wolverines, who are last in America in turnover margin at minus-12 and still looking for a win vs. a team from a Power Five conference. Trying to get on track by playing at Rutgers won?t be easy. The Scarlet Knights are playing well, their lone loss coming by three points. A Wolverines? attack that is last in the Big Ten in scoring (22.0 ppg), 11th in total offense (357.6 ypg) and 12th in passing (172.2 ypg) may find the sledding tough vs. a strong RU front seven. Expect an electric atmosphere in High Point Solutions Stadium.

4. Wisconsin (3-1, 0-0) at Northwestern (2-2, 1-0). Everyone wondered what was wrong with the Wildcats after they opened with home losses to Cal and Northern Illinois. Well, NU has rebounded to win two in a row, sending a message with the 29-6 win at Penn State, a game in which the offense showed life and the defense dominated. But the Badgers are in an entirely different league than the Nittany Lions. This will be Wisconsin?s first trip to Evanston since 2009, as NU has won the last three meetings on its turf. The Badgers? last win in Ryan Field? It was 1999, a 35-19 decision with Ron Dayne rumbling.

5. Purdue (2-3, 0-1) at Illinois (3-2). Last year, the lone Big Ten win for the Fighting Illini came at Purdue to make Tim Beckman 1-16 in conference action to date. It was an ugly 20-16 win with four Illinois turnovers. But, it was a win. Boilermakers coach Darrell Hazell is still searching for his first Big Ten triumph, sporting an 0-9 mark. Illinois needs to tighten its defense (last in the league, 468.6 ypg); Purdue needs to amp up its offense (last in the league, 312.0 ypg). You know both of these teams think they can win this game. Whichever maligned unit steps up figures to lead its team to victory.

6. North Texas (2-2) at Indiana (2-2). The Hoosiers are coming off a disappointing 37-15 home loss to Maryland in which they were outplayed in every phase, scoring just one TD with 332 yards. That loss killed the mojo IU had following its win at then-No. 19 Missouri. The offense needs to get back on track. If not, the Hoosiers could fall to a solid North Texas squad that is 2-2 and coached by Dan McCarney. Indiana lost at North Texas in 2011, the only meeting between the schools. Should IU be worried? Yes. Nate Sudfeld needs to pick it up after hitting just 14-of-37 passes for 126 yards with a pick last week.