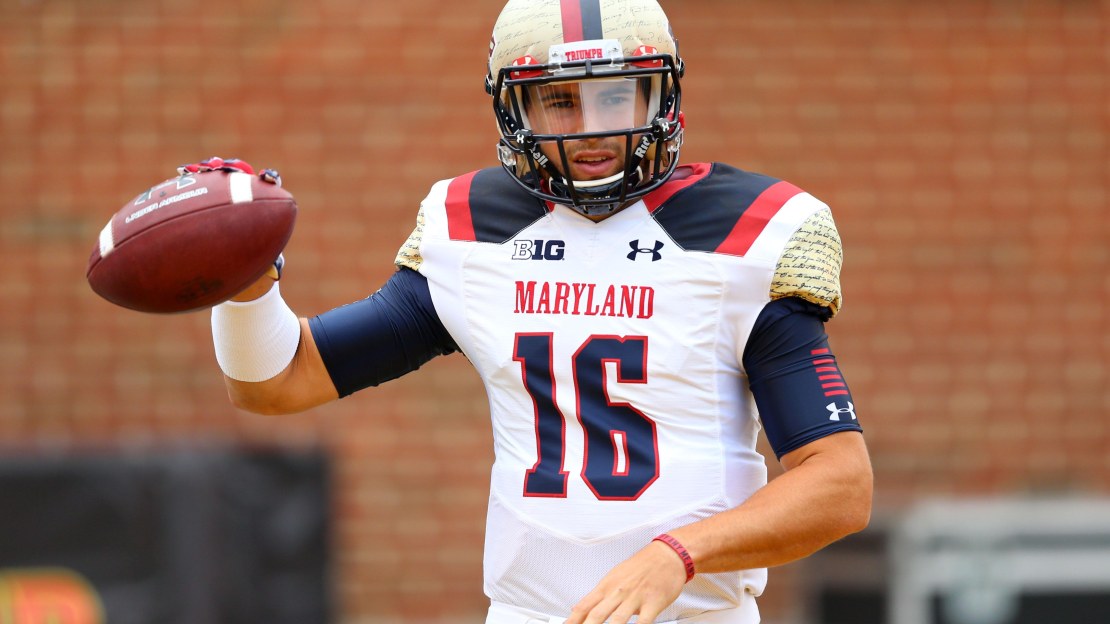 No Maryland quarterback has started every game in a season since 2006, a streak that will continue if injured C.J. Brown can't go Saturday against No. 20 Ohio State.

Brown left Saturday's 37-15 victory at Indiana with a sprained left wrist, and his status for Maryland's long awaited Big Ten home opener against the Buckeyes (3-1) remains in doubt.

If Brown is unable to start, junior Caleb Rowe would assume control of the offense. Rowe came off the bench to complete 12 of 18 passes for 198 yards and two touchdowns as the Terrapins (4-1, 1-0 Big Ten) got off to a rocking start in their new league. Unlike Brown, who is a significant threat in the running game, Rowe is more of a traditional pocket passer.

Quarterback injuries are nothing new for Maryland. Since Sam Hollenbach started every game eight years ago, every first-week starter has either lost his job, missed at least two games because of injury or, in some cases, both.

Brown has thrown for 996 yards, seven touchdowns and three interceptions in Maryland's first five games. He is also the Terrapins' leading rusher with 266 yards and five touchdowns, and has accounted for 49 touchdowns in his career, four shy of the school record.

Rowe already occupies an interesting place in recent Maryland lore. He earned one start as a true freshman in 2012, nearly leading the Terps to a victory at Boston College before tearing an ACL late in the fourth quarter of a 20-17 loss. His injury left Maryland without a scholarship quarterback, and linebacker Shawn Petty switched to offense for the final four games of the season.

Last year, Rowe filled in for Brown in two games, leading Maryland to a victory over Virginia and a loss to Clemson. For his career, Rowe has completed 110 of 207 passes (53.1 percent) for 1,595 yards, 11 touchdowns and seven interceptions.

"It's very reassuring, because he's been there before," junior tailback Brandon Ross said. "He's had to start big games, he's had to come in in the middle of big games when someone went down. He knows what he's doing. Even with that being said, he knows he has a lot of talent around him. He's already very composed and poised as it is, so that just helps him out."

Whoever winds up starting will have a tough task against the Buckeyes, who boast the country's No. 22 total defense and are yielding just 162.5 passing yards per game.

If Rowe is pressed into a starting role, his teammates are certain he will handle the situation capably.

"We know if he has to play, then he's ready to go," sophomore tackle Michael Dunn said. "That's the type of kid he is. He'll prepare and he'll be ready to go."