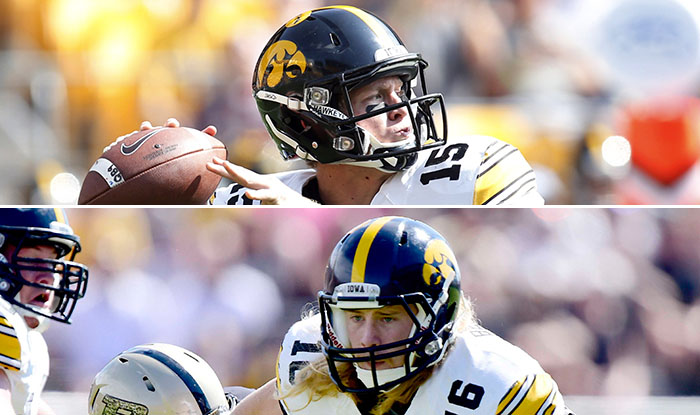 Iowa is on a bye this week, but offensive coordinator Greg Davis announced Tuesday that Jake Rudock, the starter to open the season, and C.J. Beathard, the backup who started last week's win at Purdue, will share quarterback duties moving forward.

"We feel like we have two good quarterbacks, Davis said, "and we'll look at it in these next 11 days and then we'll go from there." "What you can expect is that we'll probably play two with no set series, numbers or whatever."

Rudock started the first three games but suffered a hip injury late in the first half Sept. 20 at Pittsburgh. Davis said Rudock is about "80 percent" and that if the Hawkeyes had to play today that Beathard, a sophomore who has led Iowa to back-to-back comeback victories, would start.

The Hawkeyes don't play until Oct. 11, when they host Indiana.

How does Davis foresee the rotation playing out?

In four games, Rudock is 85-of-127 for 798 yards, five touchdowns and two interceptions; Beathard, in three games, has completed 26-of-48 passes for 363 yards, one touchdown and an interception.

Iowa beat writer Marc Morehouse was the first to report this story. See his tweet below:

And some reaction to the news:

I think splitting time between Rudock/Beathard could work. They're so close that maybe it's best to let them sort it out on the field.

I thought CJB did enough to earn a real look. And that's what this is. Can he sustain? That's how you look at this.