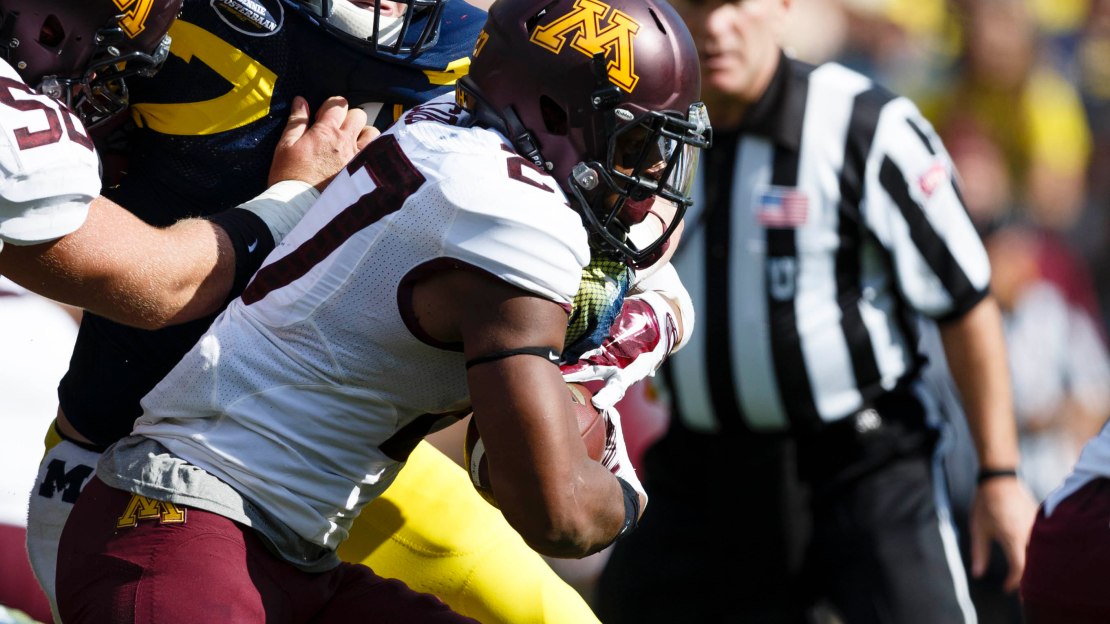 Big Ten football fans have questions, and I have answers. Is the Big Ten home to the best running backs? Why no Big Ten teams slotted for the Rose Bowl this year? See my answers to these queries and more below.

Would you agree, or could it be argued, that the Big Ten has the best collection of tailbacks this season and perhaps last season? Just look at statistics of the group. – Joanna Hutch

No doubt, the Big Ten is home to some top running back talent. It may be the best in the nation. Nebraska?s Ameer Abdullah leads the nation in rushing with 833 yards. Minnesota?s David Cobb is No. 3 (722); Indiana?s Tevin Coleman is No. 4 (691); Wisconsin?s Melvin Gordon is No. 7 (612). That is a pretty impressive collection of runners. And I haven?t even mentioned Michigan State?s Jeremy Langford, Illinois? Josh Ferguson and Ohio State?s Ezekiel Elliott. Rutgers? Paul James also is a good back, but he has been lost for the year with injury. Imagine if Venric Mark had not left Northwestern.

How come in all the bowl predictions I have seen, a Big Ten team isn?t slotted in the Rose Bowl? – Joel Dice

One of the best Minnesota games I've seen is when the Gophers slammed Ohio State in Columbus in 2000. Now that the Gophers have the Little Brown Jug, what are the chances that Minnesota dumps both Ohio State and Michigan in the same year?

I think Minnesota has a shot to do it. The Gophers play host to Ohio State on Nov. 15. Yes, the Buckeyes are good, but they look like they could be beatable this year-especially by this Minnesota squad. That visit from OSU will come during a rugged four-game run to close the season: Iowa; Ohio State; at Nebraska; at Wisconsin.

With Minnesota?s and Northwestern?s upsets on the road last week, has the Big Ten reached a level of parity it has not had in the past? – Kurt Kohl

I think parity in the league has been common in recent years. One thing the league needs, however, is a dominant team that can win a national championship. Michigan State looks to be moving closer to being such a team. Ohio State is getting better. And I think James Franklin will make Penn State a team of that ilk very soon.

Rutgers needs to post a win over a quality foe. Whipping Tulane is nice. But, it?s Tulane. The Scarlet Knights also have beaten Navy, Howard and Washington State. Not top-shelf wins. Look, I like this RU team. And it will rise in my rankings with some good Big Ten wins. Michigan visits this week followed by visits to Ohio State and Nebraska and a home game vs. Wisconsin. Plenty of chances there for the Scarlet Knights to impress.

What is going to be the difference-maker for Nebraska if it wants to win in East Lansing? How about Michigan State? Also, do you feel the Huskers will make this a good game, or will Michigan State win handily? – Don Price

Each team has a terrific offense. The key for each will be defense: Whose will step up? MSU is No. 4 in the Big Ten in total defense (289.0 ypg); Nebraska is No. 7 (331.6 ypg). As for who will win, I am leaning toward picking the Cornhuskers. I think they can run the ball better than MSU. And I think Nebraska is a bit more battle-tested than the Spartans.

If Nebraska bests the Michigan State, will the Cornhuskers have a pretty clear path to the division title? – John

After the Huskers play at MSU, they have this schedule: at Northwestern, Rutgers, Purdue, at Wisconsin, Minnesota, at Iowa. You have to like Nebraska?s chance to cruise by NU, RU and Purdue before going to Madison for what looks like a huge game vs. the Badgers on Nov. 15. Those last three games will tell the tale of the season. If QB Tommy Armstrong keeps playing well and the defense continues developing, NU could win the division.

Do you think Iowa has enough in its tank to win the West? The Hawkeyes are off to a sluggish start for a season that began with such high expectations. – Rick VanScoy

Sure, the Hawkeyes are still in the thick of things in the West. The offense has shown some life the last two weeks with C.J. Beathard at quarterback. He engineered a comeback win at Pitt two weeks ago then guided Iowa to a comeback victory at Purdue. His ability to throw downfield has been key to opening up the offense and creating room for the ground game. The defense continues to play well, ranking fifth overall in the Big Ten (310.4 ypg). Plus, I like the schedule, as Wisconsin and Nebraska both have to come to Iowa City to close the season.

So, Penn State played poorly vs. Northwestern? That poor play wasn?t because of an astounding performance by the NU defense? – Nick

Props to the Wildcat defense, which yielded just two field goals in the commanding 29-6 win at Penn State. But it?s not like Northwestern shut down the Oregon offense. The Nittany Lion attack has struggled most of the year. The offensive line is thin and lacks talent. Hence, the rushing attack is almost non-existent. That makes PSU one-dimensional and easy to defend. The Nittany Lions are 12th in the Big Ten in scoring (22.8 ppg); 9th in total offense (407.8 ypg); last in rushing (101.0 ypg).

How can you possibly say Ohio state is better than Wisconsin? The Buckeyes got beat by Virginia Tech, which has since lost at home to East Carolina and Georgia Tech. I really think your opinion of Wisconsin is low. I just feel you're underrating Wisconsin. – Nathan Lewandowski

I may be underrating the Badgers, but I guess I?m looking for a reason to be impressed. Wisconsin blew a chance to beat what looks like just a good-not great-LSU team in the opener. Then, UW didn?t wow vs. FCS Western Illinois and was tied 3-3 at halftime with USF last week. The Badgers did cream Bowling Green. Still, why should I do cartwheels for Wisconsin? OSU?s wins over Navy and Cincinnati are better than any the Badgers have.