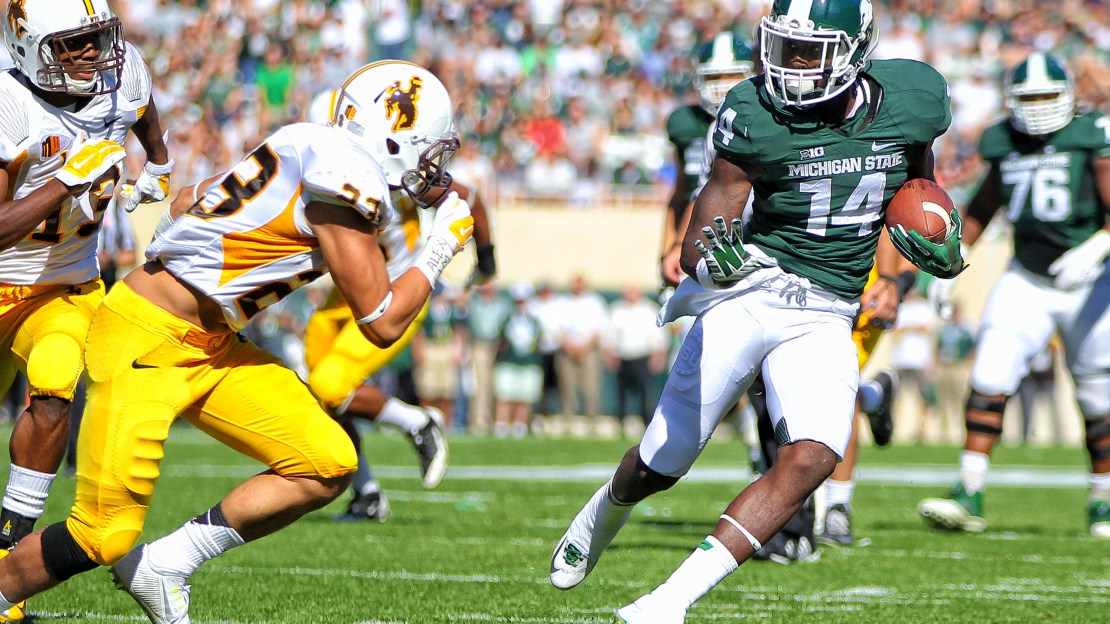 Week 5 saw the Big Ten begin to dig in on conference games with five that were on tap. There were plenty of surprises-good and bad-as the division races continue to take shape. Here?s a look at the Saturday that was.

Biggest surprise: Few outside of Evanston, Ill, thought Northwestern would march into Penn State and dominate the 4-0 Nittany Lions to the tune of 29-6. PSU failed to score a TD in a home game for the first time since a 6-4 loss to Iowa in 2004. Not long ago, things looked bleak for NU, which started 0-2. But the Wildcats have now won two in a row, as the offense came to life with 361 yards.

Biggest disappointment: Penn State. The Nittany Lions were riding high with a 4-0 marking, dreaming about a national ranking and bowl bid. But the wheels came off in a brutal 29-6 home loss to 1-2 Northwestern in which PSU failed to score a touchdown. Christian Hackenberg struggled, hitting 22-of-45 passes for 216 yards with a pick. A ground game that generated just 50 yards on 25 carries didn?t help his cause, as NU came after him vs. a shaky PSU o-line.

Play this again: Honestly, there really weren?t any tightly contested games that were worth rewinding and teeing up again.

Never play this again: Michigan State 56, Wyoming 14. This was a blowout right out of the gate, as the Spartans built a 42-14 halftime lead and never looked back in taking a 56-14 win vs. the Cowboys. MSU had 533 yards while allowing 286. Welcome to Blowout City.

Best play: In Minnesota?s 30-14 romp over Michigan, Golden Gophers? tight end Maxx Williams made a brilliant one-handed grab in the second half. Iowa?s Kevonte Martin-Manley had a nifty 23-yard TD grab against Purdue where he displayed some fancy footwork.

1. With Minnesota?s convincing win at Michigan, it?s time to include the Golden Gophers in the conversation to win the Big Ten West. Yes, Nebraska and Wisconsin appear to be the front-runners. And Iowa looks to be getting on track. But Minnesota could be a factor if it can continue to have a balanced offense. The defense is legit.

Thanks to all the fans who came out today. We hope everyone got to touch the Little Brown Jug. #Gophers pic.twitter.com/zoV66aVqOl

2. Is Ohio State?s pass defense better than last year? Not sure. It didn?t look good vs. Cincinnati, as the Buckeyes yielded 352 yards. The good news: OSU won?t face another passing attack as good as UC?s the rest of the season.

3. Maryland has one of the better quarterback situations in the Big Ten. The staff has to be confident if it has to play C.J. Brown or Caleb Rowe. Each hit 10-of-15 passes, with Brown throwing for 163 yards and a TD and Rowe throwing for 186 yards and two TDs after Brown left with a wrist injury.

4. So much for missing Paul James, who suffered a season-ending knee injury last week. Rutgers? ground game looked good vs. Tulane with 171 yards of production. Desmon Peoples had 83 yards on the ground; Justin Goodwin had 82.

5. Iowa?s C.J. Beathard made his first career start. And, it was pretty positive. He completed 17-of-37 passes for 245 yards with a touchdown and interception. He was hurt by myriad drops. Still, this is something to build on, as Beathard?s passing helped Iowa churn out 175 yards rushing. The Hawkeyes had just 16 yards in the first quarter but produced 404 the rest of the way.

6. Nebraska is the lone unbeaten team left in the Big Ten, dispatching Illinois to move to 5-0. The offense continues to set a torrid pace, working at a quick tempo and showing balance in gaining over 600 yards. The defense also is playing well. This sets up a huge game next Saturday at Michigan State.

7. The Purdue offense is listless. The Boilers notched 74 yards in the first quarter vs. Iowa-and had 82 the rest of the game. The attack has been horrid in the second half the last four games, scoring two TDs and a field goal. Purdue built a 10-0 lead vs. the Hawkeyes and lost 24-10.

8. Maryland?s status as a sleeper continues to grow. The Terps took an impressive 37-15 win at Indiana to move to 4-1. This was an IU offense that was averaging 33.7 points (6th in Big Ten) and ranked No. 2 in total offense (547.0 ypg). The Terps allowed 302 yards and just one TD. Impressive work by DC Brian Stewart.

Nebraska?s Ameer Abdullah. He continues to make a case as a Heisman contender. On this night, he ran 22 times for 208 yards and three touchdowns, averaging 9.5 yards per carry.

Wisconsin RB Melvin Gordon. He was a workhorse in a 27-10 victory vs. USF, carrying a career-high 32 times for 181 yards and two touchdowns a week after running 13 times for 253 yards and five TDs vs. Bowling Green. That?s 434 yards on 45 totes the last two weeks for Gordon, averaging 9.7 ypc.

Rutgers QB Gary Nova. He hit 14-of-21 passes for 291 yards with four TDs in a 31-6 win vs. Tulane. In the process, Nova became RU?s all-time leader in touchdown passes. He has 61 in 38 career games with the Scarlet Knights.

Minnesota RB David Cobb. He was a workhorse vs. Michigan, carrying 32 times for 183 yards to help the Gophers win the Little Brown Jug for just the second time in 24 years. When will this guy finally get his due as one of the Big Ten?s top backs? He often gets overlooked amid the likes of Wisconsin?s Melvin Gordon and Nebraska?s Ameer Abdullah.

Northwestern QB Trevor Siemian. With the running game struggling (38 carries for 103 yards, 2.7 ypc), Siemian stepped up and hit 21-of-37 passes for 258 yards. He also rushed for three scores to help propel NU to a huge win at Penn State.

Michigan State RB Jeremy Langford. He carried 16 times for 137 yards and a TD, averaging 8.6 yards per tote as the Spartans ran for 338 yards.

50, rushing yards by Penn State, which averaged a scant 2.0 yards per carry in a home loss to Northwestern.

-12, Michigan?s turnover margin. The Wolverines have 14 turnovers and have generated just two.

710, yards for Ohio State vs. Cincinnati. The Buckeyes had 330 yards passing and 380 yards rushing. Ezekiel Elliott had a breakout game, running 28 times for 182 yards and a score.

105, yards receiving by Nebraska?s Kenny Bell on five catches, averaging 21 yards per catch with a touchdown.

171, yards gained by Michigan vs. Minnesota. The Wolverines had 88 yards passing and 83 yards rushing.

50.3, scoring average for Michigan State, the program?s highest ever through four games.

6, games in a row that MSU?s Tony Lippett has caught a TD pass. He notched four catches for 76 yards vs. Wyoming.

167, passing yards for Minnesota, which entered the game with the Big Ten?s worst aerial game (99.8 ypg).

338, yards rushing for Michigan State vs. Wyoming, which had only 98.

3, losses for Michigan, the first time in program history that the Wolverines have three defeats before the end of September.

32, non-conference games won in a row at home for Wisconsin, the second-longest such streak in the nation.