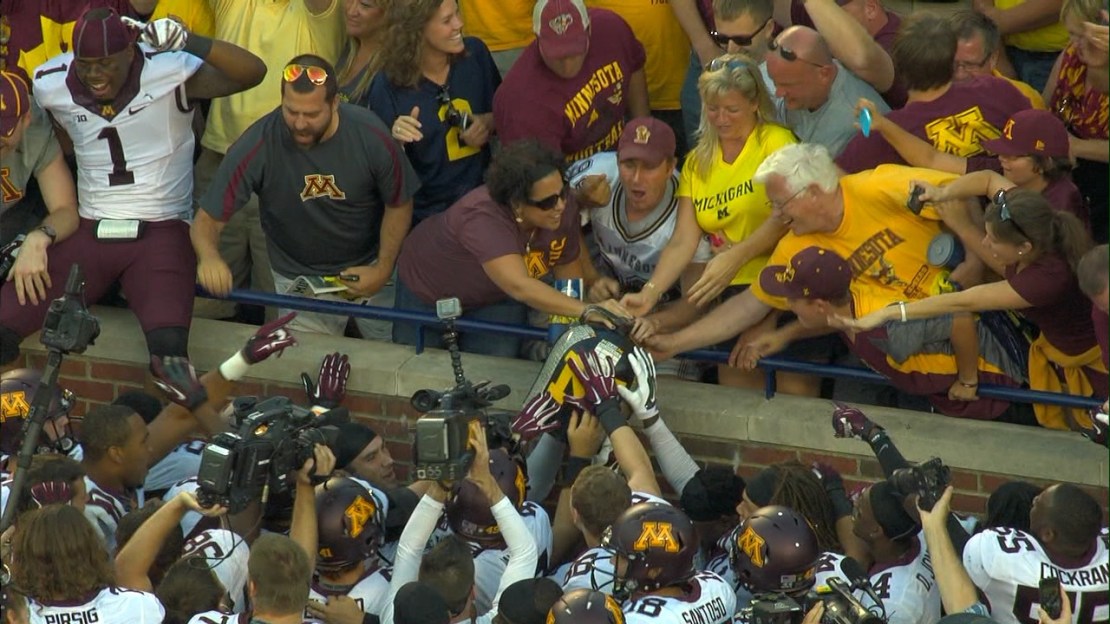 Two ships passing in the night.

That was the unshakeable image that kept popping in my head as I watched Minnesota dismantle Michigan, 30-14, in a battle between coaches who each are in the fourth season on the job. But things couldn?t be more different for the respective coaches when their heads hit the pillow tonight.

The Golden Gophers are ascending under a coach in Jerry Kill who has become an inspiration to many in his ability to overcome health challenges. Kill has seen his win total go from three to six to eight.

The Wolverines are descending under a coach in Brady Hoke who has become a target for fan ire as he seemingly can?t convert mega talent, primo facilities and high coaching salaries into big success. Hoke has seen his win total go from 11 to nine to eight.

Today?s loss at home to Minnesota may have been rock-bottom for Hoke and Michigan. If this isn?t rock-bottom, I sure don?t want to see it. For the first time in program?s 135-year history, the Wolverines have three losses before the end of September.

The Wolverines had their backs against the wall as they entered this game. Michigan needed this win to right itself after a rough 2-2 start that included a 31-0 loss at Notre Dame and a 26-10 defeat at home to Utah. In both games, the Wolverines failed to score an offensive touchdown.

But today?s effort looked a lot like many of the listless and lifeless ones from 2013 that have come to epitomize Michigan football. This once proud program is a shell of itself. The Wolverines needed to win this game to offer hope and signal change. Instead, they got blasted.

Minnesota?s future is bright, clear and focused after winning the Little Brown Jug for the first time since 2005 and just the third time since 1978. If you didn?t already know it, Kill is a terrific coach who is steering this program up. He is a no-nonsense coach for a no-nonsense program. What?s more, Kill is a perfect fit who came along at the perfect time in taking over for Tim Brewster, who promised the world and delivered nothing.

What appeals to me about Kill is the fact he is a dues-payer. He?s the ultimate blue-collar coach who has navigated college football?s back waters to success on the highest level. Look at the long, dusty road Kill has traveled to get to this point: Saginaw Valley State ? Emporia State ? Southern Illinois ? Northern Illinois.

Kill isn?t the son of a famous coach.

Kill never was a hot-shot coordinator at a major program.

But Kill is as good of a coach as you?ll find.

No excuses for failure at jobs. Just reasons why he can succeed at each stop. In that sense, Kill reminds me of Wisconsin basketball coach Bo Ryan, another guy who took a long, circuitous route to the big time. And is succeeding like few envisioned.

Today?s manhandling of Michigan provides an interesting book end to Minnesota?s trip to Ann Arbor about this time last year. If you recall, Kill suffered a seizure prior to Minnesota?s game at Michigan and didn?t accompany the squad to Ann Arbor for the Oct. 5 contest. The Gophers lost, 42-13. It was Minnesota?s second defeat in a row, and the future for Kill and the Gophers looked murky.

Some felt Kill shouldn?t continue to coach Minnesota, that his health issues would be counterproductive to building a program. It was Kill's fifth seizure-related episode since he took the job in 2011. His history of seizures dated to 2000.

After the loss to Michigan, defensive coordinator Tracy Claeys took over and Minnesota ripped off four Big Ten wins in a row for the first time since 1973 en route to finishing 8-5.

And Gophers A.D. Norwood Teague never wavered in his support of Kill, who got better and has learned to manage his health. It has been inspiring. How can you not cheer for Kill? Or the Gophers? Football needs more stories like this.

Now, the Gophers are 4-1 overall and 1-0 in the Big Ten. And the possibilities seem limitless. It may be time to include Minnesota in the mix with Nebraska, Wisconsin and Iowa for the Big Ten West title. The Gophers? passing game came to life under Mitch Leidner, who hit 14-of-22 attempts for 147 yards and a TD vs. Michigan. And David Cobb ran for 183 yards and a score. The Gopher defense did the rest.

Where does Michigan go from here? It?s anybody?s guess. The issues with the team are well-documented, especially on the offensive side of the ball. Hoke canned offensive coordinator Al Borges after Michigan saw a 5-0 start in 2013 melt into a 7-6 finish and hired Doug Nussmeier from Alabama at a salary of $830,000.

It hasn?t paid off. At all.

The line play continues to lag. The quarterback spot has been inconsistent, leading to Shane Morris making the start today over Devin Gardner. The switch didn?t matter on this day.

Morris completed just 7-of-19 passes for 49 yards and eventually left the game in the fourth quarter after getting dinged up. Gardner didn?t do much better, as the Wolverines gained a paltry 171 yards. But they did score their TD vs. a Power Five conference.

And the turnover issues persisted. Michigan entered the game with a national-high 12 turnovers. It committed two more today.

Days and games like this were supposed to be a thing of the past after Rich Rodriguez was fired following the 2010 season with a 15-22 three-year record and 6-18 in the Big Ten. (In case you were wondering, Rodriguez is 20-10 in this third season at Arizona. And Rodriguez?s offense is No. 5 in the nation, averaging 593.8 yards.)

Since starting 5-0 in 2013, the Wolverines are 4-9 in the last 13 games. And the wins haven?t been impressive: Indiana, Northwestern, Appalachian State, Miami (Ohio). Michigan plays on the road vs. a hot Rutgers team next week. There also are games left at Michigan State and at Ohio State. A visit from Maryland also looks scary.

Yes, this team should qualify for a bowl. But it doesn?t figure to be a prestigious one. And, this is a Michigan club that needs some prestige as it searches for its first Big Ten championship since 2004.