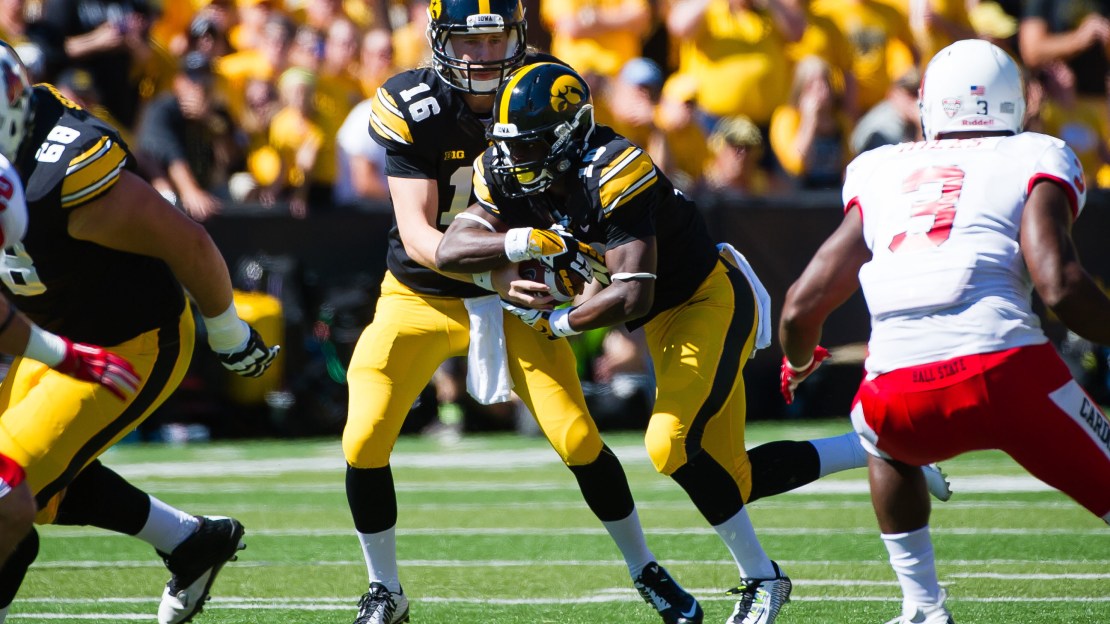 Michigan coach Brady Hoke says he has decided who will start at quarterback this Saturday when Minnesota visits. But, Hoke isn?t saying who it will be-Devin Gardner or Shane Morris.

Gardner has started 21 of the last 22 games for Michigan, his only missed start coming due to injury in last year's Buffalo Wild Wings Bowl. But after throwing his fifth interception of the season last Saturday against Utah, Michigan pulled him in favor of the sophomore Morris.

Morris then went 4 of 13 for 42 yards, with an interception and a lost fumble. Will it really matter who starts at QB if the line doesn?t play better? No.

Speaking of Michigan, former Wolverines QB Michael Taylor had some harsh things to say about the direction and state of his alma mater recently.

In the interest of fairness, ex-Michigan WR Dennis Norfleet passionately defends Hoke and rips his critics.

"I took it to heart this morning, they were really talking down on coach Hoke, saying his time is coming," Norfleet said. "Coach Hoke does a lot. For me and the team. There have been times when I needed to see my family at a critical time, or I needed to see my daughter and he was there by my side throughout the way. It's more than (just) football. In life, he's a good coach. And right now, the way people are talking about him I don't feel — and the team doesn't feel — that it's right.

"Even if we lose. If we lose, if you're a Michigan fan you're supposed to be with us 100 percent to pick us up. We need our fans just as much as we need a win. So, yes, it hurts. It hurts a lot."

Iowa can relate to the quarterback situation at Michigan, as the Hawkeyes? also have a potentially murky predicament.

Should it be Jake Rudock or C.J. Beathard? I say it should be Beathard, who took over in the second half last week at Pitt and rallied the Hawkeyes from a 17-7 halftime deficit to a 24-20 win after replacing an injured Rudock. Even if Rudock starts at Purdue on Saturday, I have to think Beathard will get some playing time.

As if Michigan State didn?t already have enough great talent, it sounds like defensive back Montae Nicholson has a physical package that hasn?t been seen in a freshman in the Mark Dantonio era. Yes, another stud for MSU.

Illinois is 3-1. But, it?s probably a bit fortunate to be 3-1, as it has started slowly in its three wins and needed fourth-quarter rallies to beat the likes of FCS Youngstown State, Western Kentucky and Texas State. The Illini never recovered from a slow start at Washington and got blasted.

The issue, according to the great Loren Tate of the Champaign News-Gazette: 1. Illinois lacks the strength to pound opponents on the ground. 2. In emphasizing the pass, offensive coordinator Bill Cubit must depend on inexperienced receivers. Three of the top four wideouts - Mike Dudek (19 catches), Geronimo Allison (16) and Malik Turner (12) - are new, and junior Justin Hardee (14) had just 11 receptions last season.

Very nice story here on Urban Meyer that looks at the Ohio State coach when he was a walk-on at Cincinnati.

Meyer didn?t have much of a career at UC. But, it helped shape who he is and has become as a coach. He gets to play his alma mater this Saturday.

If you haven?t heard about Rutgers defensive end Kemoko Turay, you soon will. He?s quickly becoming one of the top pass rushers in the Big Ten. The 6-6 Turay is an athletic freak off the edge who played just one year of high school football. He was a two-star prospect whose only FBS offer was from Rutgers. I love stories like this.

This photo of Turay blocking a field goal vs. Penn State still amazes me.

Yes, the Big Ten is down. But does Minnesota have what it takes to rise up?

Although conference teams went 12-1 in the final full-scale tune-up for league play last Saturday, the Big Ten is just 5-11 in non-conference action against teams from the Power Five conferences: ACC, Big 12, Pac-12 and SEC.

Still, unless the Gophers pump some air into a passing game that ranks last in the Big Ten, they may struggle to make a move. Stay tuned.