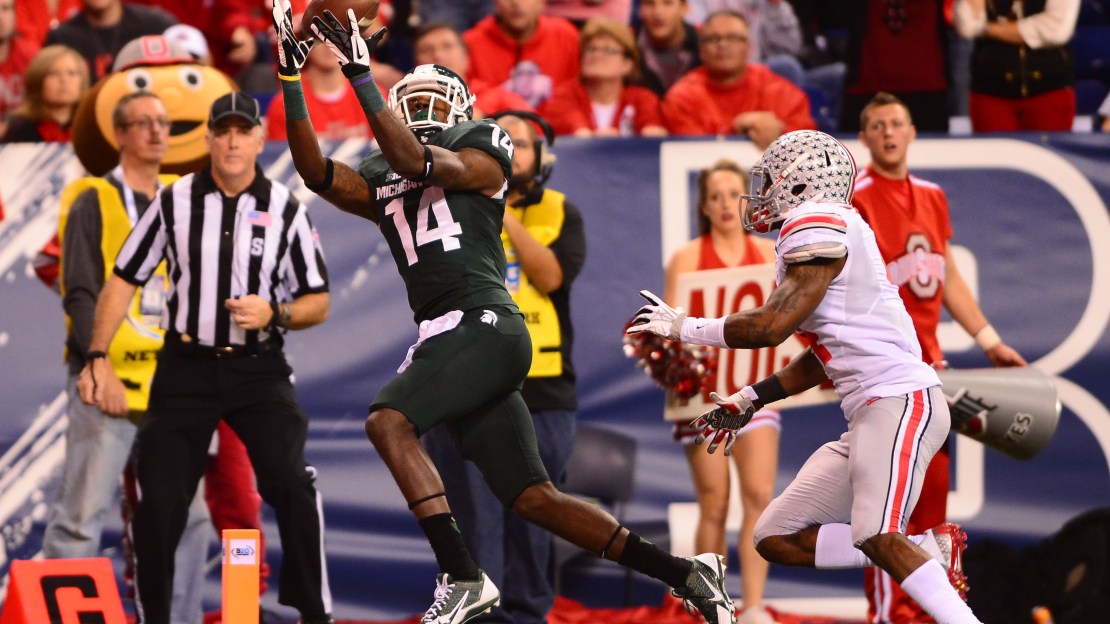 The non-conference season is basically over for the Big Ten. There are four non-league games this Saturday. And a handful after that. But, for the most part, it?s on to Big Ten action. Here are the 14 conference games that figure to have the most impact on the division races.

1. Ohio State at Michigan State, Nov. 8. With apologizes to Penn State, it?s safe to say that these are the two best teams in the East. And this game just may be for the right to advance to Indianapolis for the league title game. OSU won the last time it visited East Lansing in 2012. The Spartans are off the week before the Buckeyes visit.

2. Nebraska at Michigan State, Oct. 4. Are you thinking what I?m thinking? You know, that his may be a preview of the Big Ten championship game? The Spartans won in Lincoln last year. Can?t wait to see the Husker offense battle the MSU defense.

3. Nebraska at Iowa, Nov. 28. It?s Black Friday, and these schools may be shopping for a West division title on this day. The Hawkeyes whipped the Cornhuskers last year in Lincoln. Iowa plays host to Wisconsin the week before, a tough 1-2 punch to end the season

4. Wisconsin at Iowa, Nov. 22. This series epitomizes ?hotly contested,? as the Badgers lead, 43-42-2. This is one of several huge November games that will surely define the West race. The Badgers play Nebraska the week before.

5. Nebraska at Wisconsin, Nov. 15. Another potential de facto West title game. The Huskers were crushed, 48-17, the last time they visited Camp Randall. This one may come down to which team can run the best. The Huskers have a bye the week before.

6. Ohio State at Penn State, Oct. 25. This looks to be a chance for the Nittany Lions to show they are legit. Win this, and PSU can start dreaming big. The Nittany Lions will have a bye before this game.

7. Michigan State at Penn State, Nov. 29. This may end up being a huge East division game. It won?t get much better than Christian Hackenberg vs. Connor Cook.

8. Michigan State at Maryland, Nov. 15. Could the Terrapins play spoiler to the Spartans? Hmmm.

9. Wisconsin at Rutgers, Nov. 1. Each team has a physical offense. Which quarterback can make the most plays? A loss here could hurt the Badgers? West title hopes.

10. Iowa at Maryland, Oct. 18. If the Hawkeyes want to win the West, they likely can?t afford a slip here. The Terps will have two weeks to prep.

11. Michigan at Ohio State, Nov. 29. This edition of ?The Game? may just be for nothing more than bragging rights. Still, that?s good enough. This is as much a part of the November calendar as Thanksgiving. The Buckeyes have taken 11 of the last 13 meetings.

12. Ohio State at Maryland, Oct. 4. This is a potential trap game for the Buckeyes, who can?t afford to get into a shootout with the Terps.

13. Michigan at Michigan State, Oct. 25. The Wolverines go back to the scene of the crime where they got embarrassed, 29-6, in 2013. Can Michigan pull the upset and perhaps ruin MSU?s season?

14. Michigan State at Indiana, Oct. 18. The last time the Spartans played in Bloomington in 2012, they had to rally to win, 31-27. This visit figures to be every bit as challenging.