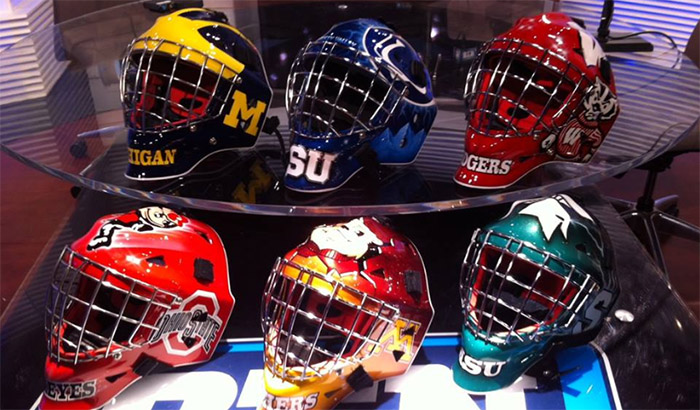 Before Michigan hockey coach Red Berenson could even finish his sentence, his backup goaltender was already out on the ice, helmet on, skates laced up, ready to go.

It was just the fourth game into the 2013-14 college hockey season, and Michigan's starting goaltender Steve Racine was down on the ice with a groin injury. Berenson turned to freshman Zach Nagelvoort to let him know it was his turn to enter the game.

"I remember looking down the bench to see if he was ready and he was already out on the ice, all ready to go," Berenson said. "He was so ready for that moment. It's like he just couldn't wait to get out on the ice and show what he could do."

The Wolverines' freshman goaltender went out and recorded 15 saves to lead Michigan to a 1-1 tie at New Hampshire, which at the time, was the No. 5-ranked team in the nation.

Nagelvoort, now set to begin his sophomore season, is one of several outstanding goalies set to take the ice in the Big Ten. In fact, every Big Ten team returns its starting goaltender, and coaches have taken notice.

"There's not a weak one in the conference," Michigan State coach Tom Anastos said. "It's strong across the board. You know every time you go out there and play a game, the goaltending is going to be good, which typically is going to result in close games."

To understand how good the goaltending is in the Big Ten, take a look back to last season, when Minnesota placed first in the conference standings (14-3-3), with 12 of the 20 games resulting in a tie or one-goal margin.

"I'm confident enough to say that we have one of, if not, the best set of goaltenders of any conference in the country," Wisconsin goalie Joel Rumpel said. "It puts more pressure on us and really makes us want to be better than the other goalies throughout the conference.

"It's unbelievable to think that I can easily name every goalie in this conference just because they leave that lasting impression when you play against these guys."

While numerous former Big Ten goaltenders have gone on to have successful NHL careers, the number of goalies from the conference in today's NHL is down to three: Ryan Miller (Michigan State/Vancouver Canucks), Al Montoya (Michigan/Florida Panthers) and Brian Elliott (Wisconsin/St. Louis Blues).

However, many Big Ten coaches believe that number will grow with the talent between the posts this season.

Wilcox was the runaway winner for Big Ten's top player in our anonymous player survey, too. The only other player to earn a vote, of course, was a goalie (Rumpel).

"It's so hard to score, and in return, that means you're going to be in every game you play. That's what I call a 'competitive balance,' and there is so much of it across the country, especially here in the Big Ten."

One element Anastos points out in the success of goaltenders in the Big Ten is age. All six starters are 20 or older.

"Typically, goalies are coming in much more mature," he said. "You're simply not seeing too many 18-year-olds stepping in and playing right away.

"These kids who play goalie are more mentally mature and are more physically strong and ready to play at the college level."

The 2014-15 Big Ten Preseason Players to Watch list was recently released, and a quarter of the players listed were goaltenders: Wilcox, Frey, Rumpel and Hildebrand.

"It makes it really exciting because every night you know you're going to go up against a stud, which motivates us goalies to be on top of our game," Hildebrand said. "The amazing thing is that it's not just necessarily the starters. Every team has at least one, if not two, great goaltenders. And those guys know they can come in and play at a high level, as well."

Hildebrand let out a faint smile after the statement, which could not be more spot on.