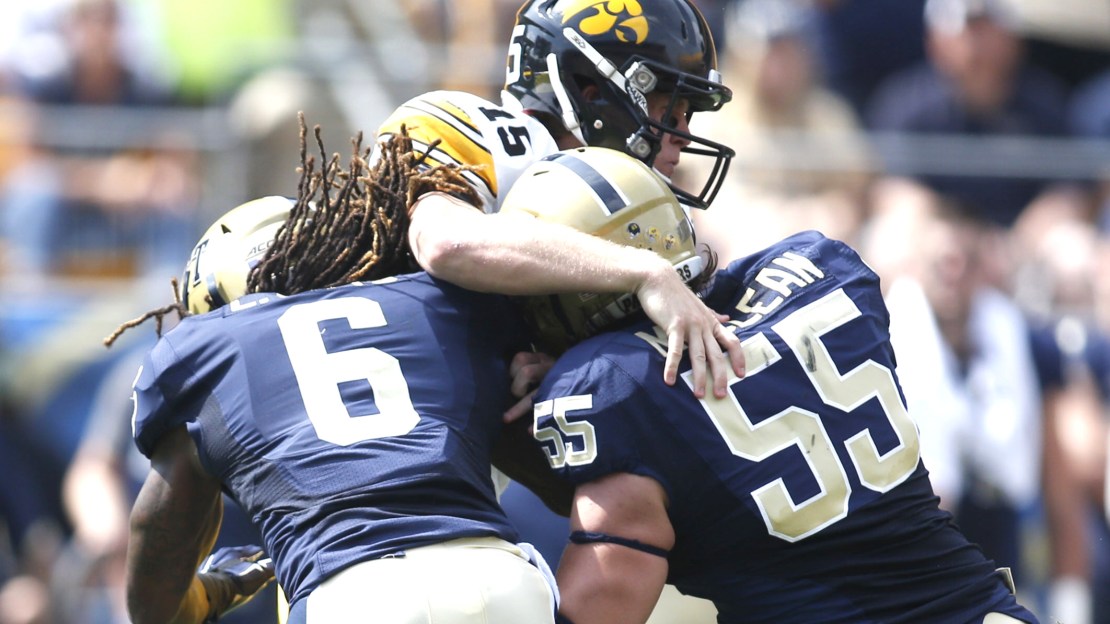 You notice all of the former Michigan State quarterbacks in the NFL? There?s Drew Stanton in Arizona; Brian Hoyer in Cleveland; Nick Foles (who later transferred to Arizona) in Philadelphia; Kirk Cousins in Washington. Looks like MSU is the new QB U. It is quite an amazing collection of passers.

The Iowa depth chart for this week is out, and Jake Rudock is still listed as the starting QB.

I guess I shouldn?t be shocked. Still, after C.J. Beathard took over in the second half at Pitt for an injured Rudock and led the Hawkeyes to victory, I would have leaned toward Beathard getting the nod at Purdue. What would it take for Beathard to get the job? Does Iowa have to lose another game with Rudock at the controls? Then, it would be OK to make a move? Don?t you wonder if Iowa would have beaten Iowa State had Beathard played or started? Even though Rudock is the starter, I have to think Beathard will get some playing time on Saturday.

Admit it: You?re surprised that Penn State is 4-0. I am. A big reason for the success is a run defense that is No. 1 in America. Now we can wonder: Is this a Top 25 team?

Why not? The Lions received the second-most votes (81) among teams outside the Associated Press top 25 poll for this week. Michigan State (No. 9), Wisconsin (19), Nebraska (21) and Ohio State (22) are the Big Ten teams that are ranked in this week's poll. A win this Saturday vs. Northwestern should push PSU into the Top 25.

With three wins, Rutgers is halfway to the six needed for bowl eligibility. You have to like the Scarlet Knights? chances to get win No. 4 this week with Tulane visiting. That would leave just two more victories needed with game left vs. Michigan; at OSU; at Nebraska; Wisconsin; Indiana; at MSU; at Maryland. It?s gonna be close.

Ohio State was off last week. Was the timing of this bye good for QB J.T. Barrett?

Seems to me it was a good time for the kid to catch his breath, refine what he?s good at and move forward. This game on Saturday with Cincinnati is intriguing. I can?t wait to see the Buckeye defense battle Bearcat QB Gunner Kiel. This will be a nice test for that OSU pass defense.

Brendan Quinn of Mlive.com has a revealing look at some of the ugly numbers inside Michigan?s struggles. First-half deficits have been a staple during these tough times.

It is stunning to think that Michigan didn?t score an offensive TD vs. Notre Dame or Utah. And the Wolverines are just 2-8 in their last 10 games vs. FBS foes. And those wins were vs. Northwestern and Indiana.

The hope of reaching the four-team college football playoff remains alive for Michigan State. It?s way too early to write off any schools in any leagues. Mike Griffith of Mlive.com has keys for the Spartans moving forward.

One of the keys: Getting the secondary back to its ?no fly zone? rep. The parts and pieces appear to be there, notes Griffith. But as a group, Michigan State?s secondary does not seem to be in sync. Safeties R.J. Williamson and Kurtis Drummond are on the spot.

I?m sure Indiana fans still have not had enough of the Hoosiers? big win at then-No. 19 Missouri. Here are five takeaways from IU?s first road win vs. a ranked team since 1987.

Turns out that gambling defense paid off.

Jerry Kill knows he must find a passing game if Minnesota wants to compete in the Big Ten West.

If the Golden Gophers have to keep riding David Cobb, Kill has no problem with that.

It worked pretty well vs. San Jose State, as Cobb finished with 207 yards on 34 carries, the highest number of carries for a Gophers running back since Amir Pinnix had 34 in the Insight Bowl loss to Texas Tech in 2006. Still, this team needs balance.

It seems Nebraska I-back Ameer Abdullah thinks his fellow Birmingham, Ala., native Jameis Winston needs to grow up. And, Abdullah is correct.