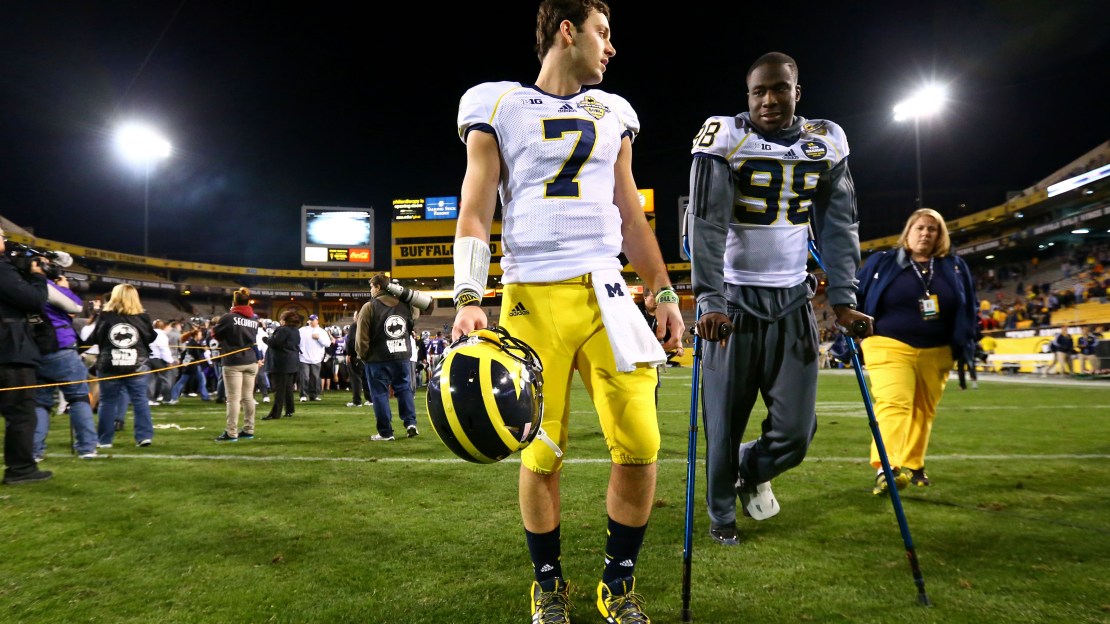 All eyes are on the Michigan quarterback situation. Will it be Devin Gardner or Shane Morris, as the Wolverines seek to spark a listless offense? The answer: stay tuned.

That was the message delivered today by Brady Hoke, who will continue to evaluate the signal-callers this week in practice as Michigan preps to play Minnesota for the Little Brown Jug this Saturday in the Big House.

"We'll probably end up later in the week (making a decision on who will start),? said Hoke. ?We want to make sure we're right."

A quarterback change doesn?t figure to be a panacea for what ails this sick Wolverine offense. It likely won?t make a huge difference who takes the snaps unless the line plays better. Turnovers have to stop, too. Michigan has committed 12 turnovers and has just two takeaways. The minus-10 turnover margin is the worst in America.

Still, there?s a sense of urgency to make something happen with the season teetering on the edge. Michigan is 2-2 and seemingly going nowhere fast. In the end, though, I will be surprised if Hoke turns the reins over to Morris.

The staff has so much already invested in Gardner. Does Michigan really want to let the inexperienced Morris try to turn things around with Big Ten play about to begin? This is no time to groom a quarterback. Games must be won-and I still think Gardner is the guy who gives U of M the best opportunity for success moving forward.

Throw out the 52-14 win over Appalachian State and the 34-10 victory over Miami (Ohio), and the season has been a struggle. Michigan was shutout, 31-0, at Notre Dame, the first time the Wolverines were blanked since 1984. Last week, Utah sat on Michigan in a 26-10 game in which the offense failed to score a touchdown.

How bad has it been in those losses to the Irish and Utes? Not only have the Wolverines failed to score on offense, but they haven?t even reached the red zone.

Gardner has struggled adjusting to the scheme of new coordinator Doug Nussmeier. The numbers show it. Gardner is completing 64 percent of his passes, but the senior has six interceptions with only five touchdowns. Plus, he has been sacked nine times. Gardner was pulled in the Utah loss.

Morris arrived in Ann Arbor as a decorated recruit. The lefty started the Buffalo Wild Wings Bowl last season, completing 24-of-38 passes for 196 yards with no TDs and a pick in a loss to Kansas State. Morris has hit 7-of-20 passes for 79 yards with two interceptions this season. The sophomore has a big arm and may be more suited to the pro-style attack Michigan wants to run.

?We're going to have both guys take the reps and we'll have some other potential changes we'll get to later in the week,? said Hoke.

This is going to be interesting.