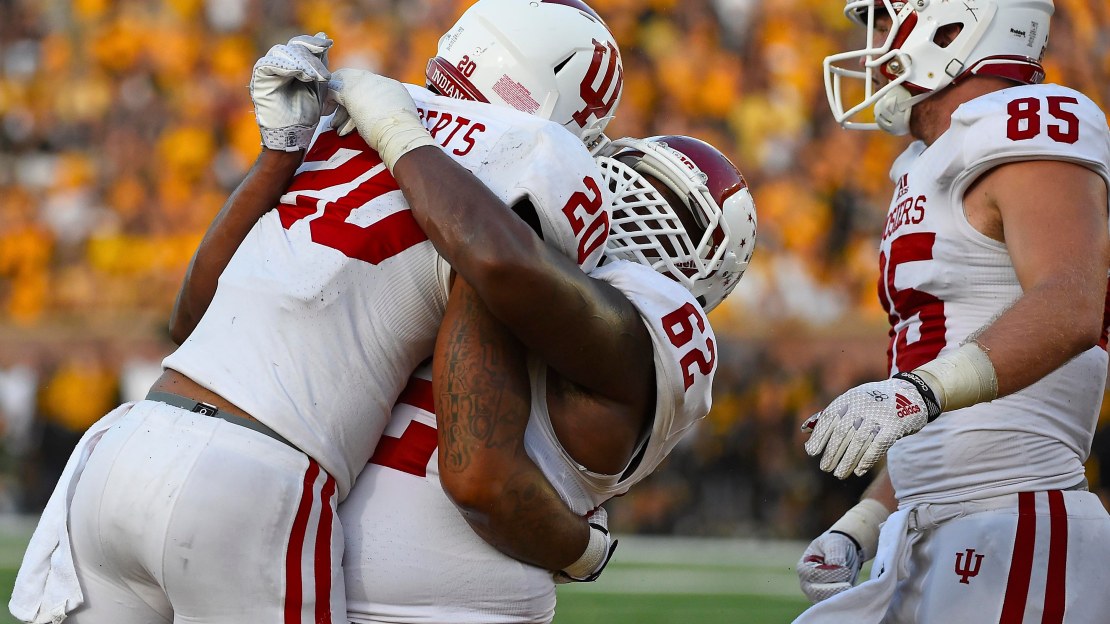 No Big Ten team had a bigger win on Saturday than Indiana, which knocked off No. 19 Missouri. It was the Hoosiers? first road victory over a ranked foe since ? 1987. Was this a program-changing triumph for IU?

I don?t know if I want to go that far. Things never are as good or bad as you think. The Hoosiers still got beat up on defense, allowing 498 yards. And IU was just 1-of-14 on third downs. The Hoosiers still will need to outscore foes to win games. Reaching a bowl remains a big challenge.

Tough blow for Rutgers, which has lost workhorse running back Paul James for the season to a knee injury.

When James went down on Saturday at Navy, Justin Goodwin (26 carries for 104 yards) and Desmon Peoples (19-for-82) each stepped up to help Rutgers notch 284 yards rushing. That was RU?s highest rushing total since the 2007 International Bowl win over Ball State. So, RU should be OK without James.

The emergence of C.J. Beathard for Iowa was a huge revelation on Saturday. He took over in the second half after Jake Rudock got hurt and guided the Hawkeyes to a comeback victory at Pitt. The sophomore was the spark this listless offense needed.

Should Beathard start the next game if Rudock is healthy? I say ?yes.?

Griffith doesn?t think the power run game is on par with last year. And there are still breakdowns in the secondary. Griffith also thinks this MSU team is playoff-worthy. And, I agree. Watch the Spartans keep getting better and better.

While things are cruising along for Michigan State, Michigan is sinking. Nick Baumgardner of Mlive.com says the little things are continuing to haunt the Wolverines.

Well, the big things aren?t going well, either. Looks like firing offensive coordinator Al Borges wasn?t the answer. And at one point Saturday, Brady Hoke and defensive coordinator Greg Mattison were chirping at each other. Plus, Devin Gardner was ultimately replaced. Just a horrid day in the Big House during a loss to Utah.

Was last Saturday rock-bottom? For Hoke?s sake, I hope so.

Good video here of Penn State QB Christian Hackenberg talking about the Nittany Lions offense and his effort in a dominating victory vs. UMass.

Penn State is 4-0 with a visit from Northwestern next. Then, the Nittany Lions have a bye before a trip to Michigan. This team is rolling-and Hackenberg may be the best player in the conference.

Minneapolis Star-Tribune columnist Chip Scoggins hits the nail on the head when he said the Golden Gophers need to amp up the passing game at some point.

Just running the ball may work vs. San Jose State-which lost to a Minnesota club that completed just one pass on Saturday. But it won?t in the Big Ten. I guess I?m a bit worried if this ever will be a balanced Gopher offense in 2014.

Yes, Northwestern notched its first win of the season, knocking off FCS Western Illinois. But, the Wildcats will have to play much better if they want to add to their victory total.

InsideNU.com notes that the Wildcats gained a meager 4.29 yards per play. They were out-gained by 93 yards and put together far fewer good drives than FCS Western Illinois. The passing game averaged 4.7 yards per attempt and 7.8 yards per completion - it was check-down after designed short pass after check-down. ? Still, I guess NU could notch wins vs. Illinois and Purdue. But, those games look like toss-ups. Long story short: stay tuned.

Solid win for Purdue over FCS Southern Illinois. The defense has shown some signs of progress in recent weeks. The unit needs to keep it up if Purdue wants to win another game.

The Boilermakers have double their win total from last year. The next challenge: To win a Big Ten game. I think it?s gonna happen.