What did Tom Dienhart learn about Big Ten in Week 4? Here's what! 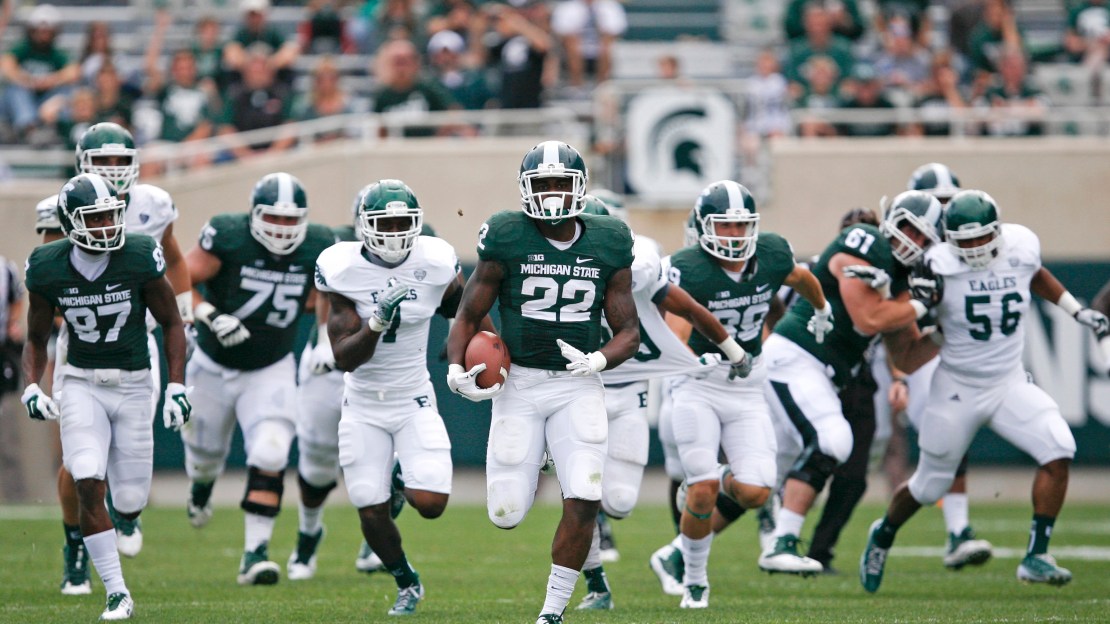 It was a great Week Four for the Big Ten, as the conference scored some impressive wins en route to compiling a 12-1 record.

Here is what I learned.

1. The Big Ten has a pulse. After a tough opening three weeks for the conference, it scored some nice wins. None was better than Indiana?s 31-27 triumph at No. 19 Missouri. And Iowa?s 24-20 win at Pitt was impressive, too, after the Hawkeyes had lost to Iowa State the last time out. But the highlight, from a national and playoff perspective, was Nebraska?s dominating 41-31 home victory vs. Miami (Fla.), the Big Ten?s best non-conference win of 2014.

2. Michigan State looked utterly dominating in a 73-14 win vs. Eastern Michigan. This was men vs. boys, as the Spartans showed they mean business in their quest to repeat as Big Ten champs. Basically, MSU did what it was supposed to do in impressive style: It destroyed an inferior foe. A visit from Wyoming is next followed by a visit from Nebraska on Oct. 4 in what could be a preview of the Big Ten championship game. I can?t wait for that MSU-Nebraska game.

3. Nebraska looks like the team to beat in the Big Ten West. The Huskers were dominating in a 41-31 win vs. Miami (Fla.), with Ameer Abdullah putting the team on his back by carrying 35 times for 229 yards and two TDs. This was a Heisman-worthy performance in what was the best non-conference win for the Big Ten in 2014. The key to the Cornhuskers? 4-0 start: an offense that ranks No. 8 in the nation (559.8 ypg).

4. Melvin Gordon is still Melvin Gordon. The Wisconsin back ran 13 times for 253 yards and a school single-game record-tying five touchdowns in a 68-17 win vs. Bowling Green. You get the feeling if he had wanted to, Gordon could have run for 500 yards. Gordon ran 17 times for only 38 yards vs. FCS Western Illinois the last time out, causing some to be concerned. No worries. With Gordon leading the way, the Badgers totaled 644 yards on the ground vs. BGSU, averaging 10.7 yards per carry.

5. The struggles continue at Michigan. The offense roared when playing Appalachian State (52 points, 560 yards) and Miami, Ohio (34 points, 460 yards). But it has flamed out vs. Notre Dame (0 points, 289 yards) and Utah (10 points, 308 yards). The 26-10 loss in the Big House to Utah yesterday was brutal, dropping Brady Hoke to 4-8 in his last 12 games. Devin Gardner has struggled, with zero touchdowns and five picks in the two losses. What direction are the Wolverines headed?

6. The reports of Iowa?s demise were exaggerated. But, it was looking a bit bleak after the Hawkeyes opened 2-1 with the offense struggling. Well, coming off a dispiriting home defeat to Iowa State, Iowa?s attack showed life in the second half of a big 24-20 win at Pitt after C.J. Beathard took over for injured Jake Rudock. Beathard completed 7-of-8 passes for 98 yards to spark Iowa to a key victory. The sophomore led Iowa to a touchdown, field goal and touchdown on their first three possessions of the second half to erase a 17-7 halftime hole. Is there any way Beathard doesn?t start next week at Purdue?

7. Penn State continues to get better. The Nittany Lions crushed UMass, 48-7. And, in doing so, Penn State showed balance that previously was missing, passing for 236 yards and rushing for 228. (PSU was No. 13 in the Big Ten in rushing (75.7 ypg) entering Saturday.) And the defense continued to dominate by yielding just 266 yards. Up next for PSU: Northwestern, bye, at Michigan. Could the Nittany Lions start 6-0? Even more to the point: Is this team a legit contender in the East?

8. Rutgers could be a factor. The Scarlet Knights showed resiliency in rebounding from that emotional home loss to Penn State last week to win at Navy, 31-24. It isn?t easy to prep for the Midshipmen?s triple option offense in one week. RU did, muting the rushing attack to 171 yards after Navy ranked No. 1 in the nation (403) entering the day. Any squad that can do those two things has a shot to win most games.

9. Tevin Coleman is good. Really good, actually, as he showed he may be on par with Nebraska?s Ameer Abdullah and Wisconsin?s Melvin Gordon. The Indiana running back entered Saturday leading the Big Ten with an average of 218.5 yards rushing. The first two games, he had 47 carries for 437 yards, averaging 9.3 yards per carry. Coleman ran 19 times for 132 yards (6.9 ypc) with a TD in a huge 31-27 win at No. 19 Missouri. He had a big 44-yard run late to set up IU?s game-winning score after sitting the final 20 minutes of the first half with cramps. Coleman has scored a TD in 12 games in a row, tying the school record set by Anthony Thompson in 1988-89. Coleman is good-and tough.

10. Don't sleep on Maryland. The Terps have two true road victories, winning 34-20 at Syracuse on Saturday, and their only loss was a last-second home defeat to prolific West Virginia. Maryland has a shot to be a top-three team in the East, but the defense must tighten after allowing 694 yards vs. WVU and 589 to SU. The games at Penn State (Nov. 1) and at Michigan (Nov. 22) will be key.