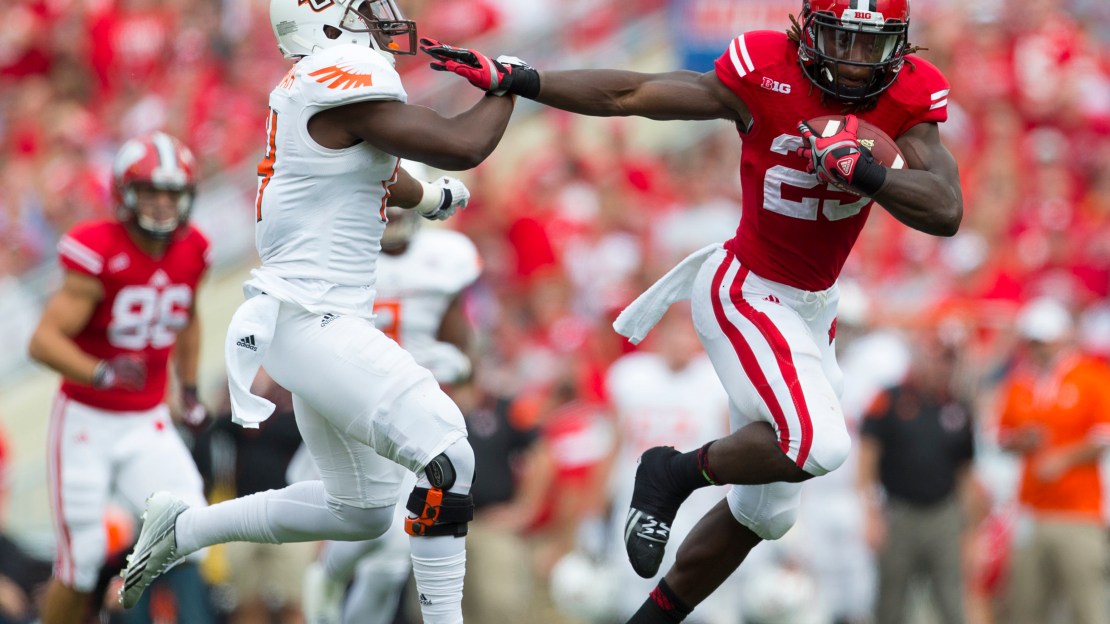 Now, that's more like it! The Big Ten impressed Saturday, going 12-1, with road wins at No. 19 Missouri, Navy, Syracuse and Pitt, and a home win vs. Miami (FL).

Here is a look at the day.

Biggest surprise: Few envisioned Indiana winning at No. 19 Missouri as a big-time underdog. Last week, IU lost in waning moments at Bowling Green, 45-42, en route to allowing 571 yards. The Hoosiers rebounded to win at 3-0 Missouri, 31-27. IU allowed the Tigers to score 10 unanswered points in the fourth quarter to take a 27-24 lead with 2:20 to go. But Indiana rallied to score the game-winning TD with 22 seconds left to prevail after DeAngelo Roberts scored from 3 yards.

Biggest disappointment: Michigan. Things don?t appear to be getting any better for the Wolverines, who fell to 2-2 with a 26-10 home loss to Utah. Michigan is 4-8 in its last 12 games, with the wins coming vs. Indiana, Northwestern, App State and Miami (Ohio). The Michigan offense continued to struggle, notching 308 yards with 118 on the ground. Turnovers also were an issue, as the Wolverines had four.

Play this again: It has to be Indiana's unexpected and exciting upset at No. 19 Missouri. No team led by more than seven points, there were four lead changes, and the game-winning points came on a scoring plunge with 22 seconds left.

What's-going-on-out-there moment? Eastern Michigan's center committed a (hilarious) penalty that you need to see to believe, and Utah punt returner Kaelin Clay flashed the Heisman pose after returning a punt for a TD at Michigan Stadium.

1. This was a good day for the Big Ten, which went 12-1. Finally. The league played pretty well in most games, looking dominating (Wisconsin over Bowling Green; Michigan State over Eastern Michigan) and winning big games (Iowa at Pitt; Maryland at Syracuse; Rutgers at Navy; Indiana at Missouri; Nebraska vs. Miami). This is what the conference needed moving into league play.

2. Iowa showed a lot of heart by gutting out a 24-20 win at Pitt. The move from injured Jake Rudock to C.J. Beathard in the third quarter seemed to energize the Hawkeyes. Beathard hit 7-of-8 passes for 98 yards. His 62-yard completion to Damond Powell was a spark for the attack in the third quarter. This is a victory to build on.

3. Nice bound-back win by Rutgers. I wasn?t sure how the Scarlet Knights would rebound from that tough 13-10 defeat last week at home to Penn State. But Rutgers showed resiliency in notching a win in Annapolis vs. a good Midshipmen squad. And how about Gary Nova? A week after tossing five interceptions, he had none on Saturday. The defense allowed just 171 yards rushing vs. a vaunted Navy triple-option offense that is difficult to prepare for in a week and was leading the nation in rushing.

That was a 60-minute CHOP for @RFootball – great win at Navy. #ChopNavy pic.twitter.com/A9FDqseVlg

4. Give Minnesota credit. The Gophers found a way to win 24-7 vs. San Jose State with backup QB Chris Streveler hitting just one-of-seven passes for seven yards and a pick in place of injured Mitch Leidner. This comes a week after Minnesota was dominated at TCU, 30-7. Still, the Golden Gophers will struggle to match last year?s eight wins unless the passing game improves.

5. Purdue needed this win. The Boilermakers? 35-10 victory evened their record at 2-2 heading into Big Ten play. Yes, the victim was FCS Southern Illinois. Still, Purdue just needed to taste victory, as QB Danny Etling had another solid outing. It may be hard-pressed to win again the rest of the season.

6. Hello, win column! Northwestern won its first game of the season by downing FCS Western Illinois after going 1-9 in its previous 10 games. It was nice to see freshman backs Solomon Vault and Justin Jackson do well. Still, the Wildcats were outgained, 376-283. Can NU build on this?

8. Illinois likes the fourth quarter. In its three wins, Illinois has needed a fourth-quarter comeback, outscoring its foes 59-22 in the final stanza. This may work against the likes of Texas State, but the Illini will need to avoid late deficits if they want to have success in Big Ten play.

9. Michigan QB Devin Gardner continues to struggle. He completed just 14-of-27 passes for 148 yards with no touchdowns and two interceptions in a 26-10 home loss to Utah. Gardner has five touchdown passes and six interceptions on the season. He just doesn?t look comfortable in the new offensive scheme of coordinator Doug Nussmeier.

10. Nebraska notched the most impressive non-conference win of the season for the Big Ten. In the 41-31 win vs. Miami (Fla.), the Huskers controlled the chippy game throughout to move to 4-0. This team will be difficult to beat as its confidence grows.

Wisconsin RB Melvin Gordon. He ran for a career-high 253 yards (19.5 ypc) and five touchdowns, as the Badgers rushed for a modern Big Ten single-game record 644 yards rushing in a 68-17 win vs. Bowling Green. The last time out, Gordon ran for 38 yards. Yes, he?s back!

Indiana RB Tevin Coleman. He ran 19 times for 132 yards (6.9 yards per carry) and a touchdown despite missing significant time due to injury in the upset at No. 19 Missouri. His 44-yard run late in the fourth quarter to the MU 15-yard line setup the game-winning touchdown for the Hoosiers in a 31-27 win.

David Cobb becomes the sixth running back in Gophers history to record two 200-yard rushing games in a season. Has 207 yards

Maryland QB C.J. Brown. He completed 16-of-26 passes for 280 yards with two touchdowns and no interceptions in a 34-20 win at Syracuse.

Nebraska RB Ameer Abdullah. He ran 35 times for 229 yards and two touchdowns in a 41-31 win vs. Miami (Fla.). Oh, by the way, he also became Nebraska's all-purpose yards leader.

190, yards rushing by Illinois? Josh Ferguson. And he did in on 14 carries, averaging 13.6 yards per carry and scoring two touchdowns.

1, incompletion for C.J. Beathard, who hit 7-of-8 passes off the bench to spark Iowa to a big win at Pitt

320-1, the yardage totals at halftime for Michigan State and Eastern Michigan.

3, rushing yards allowed by Penn state in a 48-7 victory vs. UMass.

2, wins for Purdue, which is one more than it had all of last season following a 35-13 triumph vs. FCS Southern Illinois.

3, comeback wins for Illinois this season. All three victories for the Fighting Illini have come after they trailed in the second half. Texas State led, 28-25, entering the fourth quarter. But Illinois outscored Texas State, 17-7, in the final stanza to take a 42-35 victory.

284, yards rushing for Rutgers vs. Navy in a 31-24 Scarlet Knights? triumph. Justin Goodwin took over for a banged up Paul James and ran for 104 yards. James had 96 yards before leaving with a leg injury.

6, losses Northwestern had suffered in succession at home prior to today?s win over Western Illinois.

1, completions for Minnesota in its 24-7 win vs. San Jose State. Chris Streveler completed one-of-seven passes for seven yards with an interception starting in place of injured Mitch Leidner. The Gophers were fueled by 380 yards rushing.

4, turnovers for Michigan. The Wolverines entered the game with a Big Ten-high eight turnovers. They now have 12 in four games.