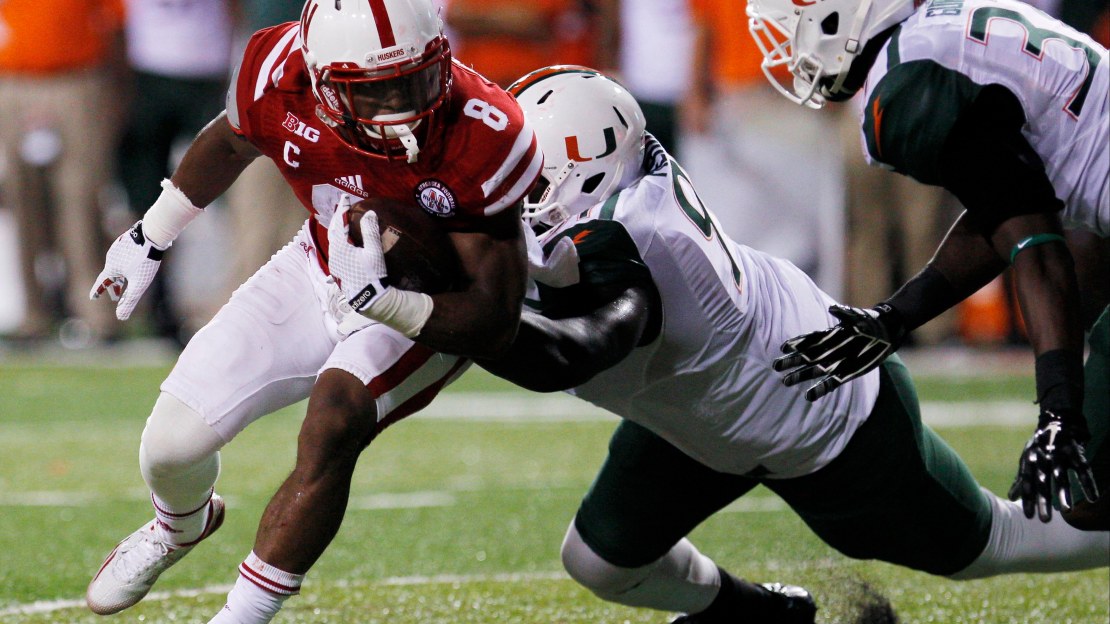 It was a bounceback week for the Big Ten, as the conference finished Saturday with a 12-1 record, highlighted by Nebraska's win over Miami (Fla) and Indiana's win at No. 19 Missouri. There were plenty of outstanding individual performances on the day, many of which came on offense.

1. Melvin Gordon, RB, Wisconsin. Badger fans were waiting for their talented junior back to have a breakout game, and that's exactly what happened on Saturday. Gordon rushed for an eye-popping 253 yards and five touchdowns in Wisconsin's 68-17 win over Bowling Green. Gordon's five TDs tied a school record, while his 253 rushing yards are the most by any running back vs. an FBS team this season. That's impressive.

2. Ameer Abdullah, RB, Nebraska. The Huskers' senior back continues to shine and has cemented his name as a legitimate Heisman Trophy candidate. Abdullah was outstanding again on Saturday night, rushing for 229 yards and two touchdowns in a 41-31 win over Miami (Fla). Abdullah has totaled more than 150 yards in every game this season and now holds the school record for the most all-purpose yards from scrimmage.

3. David Cobb, RB, Minnesota. How do you win a game by only completing one pass? It certainly helps when you have David Cobb in the backfield. The Gophers' senior back carried the ball 24 times for 207 yards and two touchdowns in Minnesota's 24-7 victory over San Jose State. This was Cobb's second 200-plus yard rushing game this year.

4. Josh Ferguson, RB, Illinois. Ferguson was outstanding in Illinois' 42-35 come-from-behind victory over Texas State. He carried the ball 14 times for 190 yards and two touchdowns, while also adding four catches for 43 yards and a score through the air. This was the first three-touchdown game in Ferguson's career.

5. C.J. Brown, QB, Maryland. This guy has been one of the top surprises in the Big Ten this season. Brown was outstanding again on Saturday in the Terps' 34-20 win over Syracuse. The sixth-year senior hit 16-of-26 passes for 280 yards and two touchdowns, while also adding 25 yards on the ground.

6. Tevin Coleman, RB, Indiana. Coleman continues to make his case for being one of the top backs in the conference. The Hoosiers' junior back had a huge performance in Indiana's 31-27 upset win over Missouri, rushing for a game-high 132 yards and a score. Coleman also caught three passes for 57 yards in the victory. This stud halfback has now totaled 180-or-more yards in every game this season.

7. Tanner McEvoy, QB, Wisconsin. McEvoy was solid in the passing game, but it was his ability to run the ball that really stood out in the Badgers' commanding 68-17 victory over Bowling Green. The Badgers' first-year starter rushed for 158 yards and a score in the victory. He completed 9-of-16 passes for 112 yards and a touchdown through the air. This guy has made great strides through three games this season.

8. Delton Williams, RB, Michigan State. Mark Dantonio wanted to make a conscious effort to get the Spartans' ground game going on Saturday, and that's exactly what happened. MSU racked up 336 yards and seven touchdowns on the ground in a 73-14 blowout victory over Eastern Michigan. Williams was the leader on the ground, picking up 103 yards and three scores in the win.

9. Justin Goodwin, RB, Rutgers. This is a guy who started the season opener at cornerback before being moved back to his original halfback position just last week. Goodwin came in relief of the injured Paul James and rushed for a game-high 104 yards and a touchdown, as Rutgers beat Navy 31-24 on Saturday.

10. Danny Anthrop, WR, Purdue. Purdue got in the win-column with a solid passing game, led by Anthrop. The Boilermakers' junior wideout caught five passes for a team-high 106 yards and a touchdown in Purdue's impressive 25-13 win over Southern Illinois on Saturday.