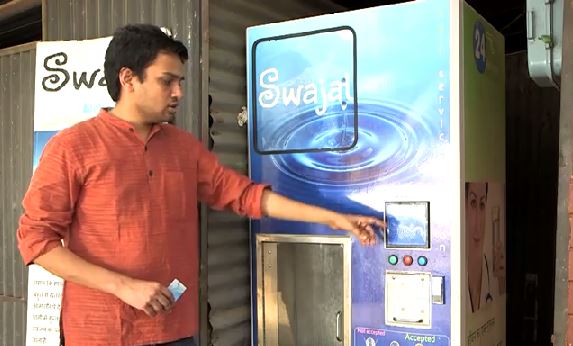 When Advait Kumar was growing up thousands of miles away in Kanpur, India, there was never any question of where he?d go to college.

?My father went to Penn State in 1980,? he said. ?My brother?s going there too. We call ourselves a Penn State family in India.?

But while he dreamed of Happy Valley, Kumar also observed a serious problem in his hometown. Living on the Ganges River, the impoverished residents of Kanpur had a water supply that was unpredictable (thanks to highly dissimilar monsoon and dry seasons) and unhygienic (because of industrial waste and individual polluting).

This causes severe health issues for people in that city, such as diarrhea, which claims the lives of about 1,600 people in India per day. And the young in particular are adversely affected. In fact, conditions in Kanpur were so bad that Kumar saw children?s bones bending from ailments caused by contaminants in the water.

When he arrived at State College, Pa., he had the germ of an idea for creating something that could alleviate that problem. Kumar credited school?s academic resources with helping him formulate a strategy for approaching the challenge.

?Penn State is so big and has so much to offer,? he said. ?The learning in entrepreneurship and economics helped me connect the dots. And you could always go to your professors and talk with them. You could tell them ?I?m having trouble,? and they would help you with whatever you needed.?

Additionally, the university?s clubs connected him with other people who had similar interests and passions. ?There?s always a group of people who are single-minded like you,? he said. ?If you can find them, that?s great.?

While on break from his studies in the summer of 2011, Kumar hunkered down in his basement of his home with his computer and founded a start-up called Swajal, based on the idea that ?clean water is everyone?s basic right.?

The organization?s mission is to provide purified water in communities throughout India where it?s in short supply. To do that, it facilitates microloans to help local entrepreneurs set up automated stations in those communities where customers can purchase a liter for a very affordable 1 rupee (equivalent to about 2 cents).

As a student, Kumar devoted 10 hours a week to getting Swajal up and running. Today, the company has a great staff, as well as strong financing and external support, he said.

Kumar has since graduated from Penn State with a degree in electrical engineering and is currently working for a financial firm. He also has stepped back from day-to-day involvement with Swajal and serves in more of an advisory role. But it?s safe to say he?s done what he set out to accomplish.

?If one child didn?t get diarrhea [because of Swajal], that?s enough for me,? he said.