Top Freshmen in the Big Ten heading into Week 4 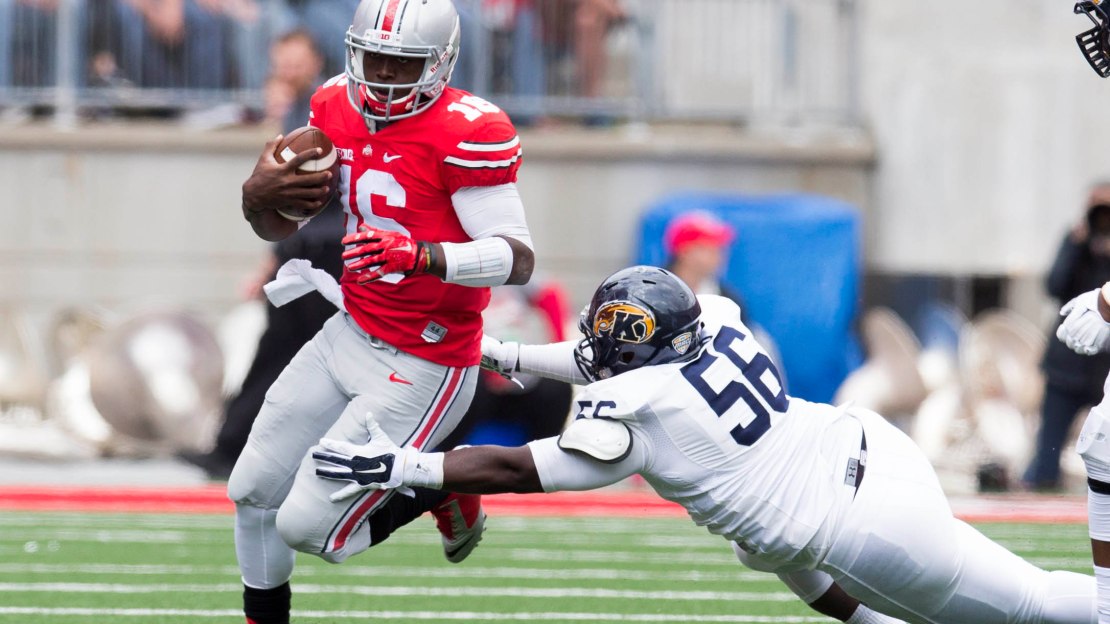 As we head into Week 4 of the college football season, all eyes will be on Nebraska's matchup with Miami (Fla). Nebraska fans are already familiar with standout freshman De'Mornay Pierson-El, who leads the Big Ten with 216 yards on punt returns and a touchdown. Pierson-El is one of several standout freshman who have already made a name for themselves in nonconference play.

Here is a look at 10 Big Ten freshmen who have impressed heading into Week 4 of the season.

Read more of our Week 4 coverage:

J.T. Barrett, QB, Ohio State. Barrett has had the difficult task of taking over for All-Big Ten quarterback Braxton Miller. Through three games, Barrett has led the Buckeyes to a 2-1 record, while completing 59.5 percent of his passes. Barrett has thrown for 757 yards, nine touchdowns and five interceptions, while also adding 126 yards and a score on the ground.

Ja'Whaun Bentley, LB, Purdue. Bentley made a name for himself when he became the first Purdue true freshman to start a season opener at linebacker in more than a decade. He has already totaled 18 tackles in three games, which is the most of any Big Ten freshman.

Mason Cole, OL, Michigan. There were plenty of questions about the Wolverines' offensive line heading into this season, but this group has been solid up to this point. Cole, who is the first true freshman left tackle to start a game for the Wolverines in modern history, has helped pave the way for a rushing attack that ranks third in the Big Ten, averaging more than 240 yards per game on the ground.

Mike Dudek, WR, Illinois. Illinois coach Tim Beckman spoke very highly of Dudek heading into the season, and through three games, this freshman wideout has certainly lived up to his coach's praise. Dudek has already hauled in 12 catches for 159 yards and two scores, while helping guide the Fighting Illini to an early 2-1 record.

Berkley Edwards, RB, Minnesota. Edwards hasn't received a ton of carries while playing behind workhorse back David Cobb, but when he is called upon, he has taken advantage of it. The Gophers' freshman back is averaging an impressive 6.4 yards per tote through three games. He has totaled 84 yards and two touchdowns, both of which came in Minnesota's 42-20 win over Eastern Illinois in Week 1.

DaeSean Hamilton, WR, Penn State. This guy has been one of the top freshman performers not only in the Big Ten, but throughout the entire country. Through three games, Hamilton has already hauled in 26 passes, which leads the Big Ten. He has caught seven-or-more passes in every game and has developed into Christian Hackenberg's go-to target.

Justin Jackson, RB, Northwestern. With the transfer on Venric Mack, it looks like Jackson will be the guy to take over the Wildcats' running back duties. This guy has racked up 115 yards and a touchdown in Northwestern's two games. He has been one of the lone bright spots on an offense that ranks last in the Big Ten in scoring.

De'Mornay Pierson-El, WR/KR, Nebraska. This standout freshman leads the Big Ten in punt return yards (216) and touchdowns (one). Pierson-El also has a receiving touchdown and has provided an added spark to the Huskers' offense.

Curtis Samuel, RB, Ohio State. Who will replace Carlos Hyde? It was one of the most popular questions heading into the Big Ten season. The answer looks to be Curtis Samuel, the Buckeyes' talented freshman back who leads the team with 171 yards on the ground and two touchdowns.

Kemoko Turay, DE, Rutgers. This guy has been a force on the Scarlet Knights' defensive line this season. Through three games, Turay has already recorded 3.5 sacks, which leads the Big Ten. The most incredible part of his performance thus far is the fact that Turay only played one year of high school football. This guy is on his way to being a special player.