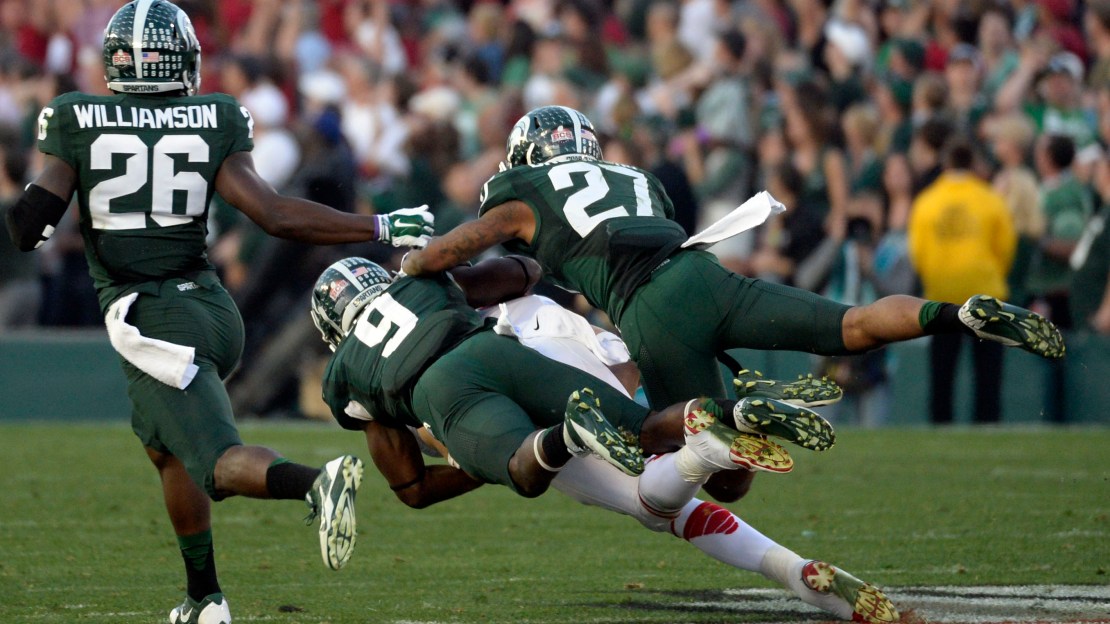 Michigan State was off last week, licking its wounds after a tough loss at Oregon. A lack of first-down production vs. the Ducks has some wondering about the tailback rotation. Will it change? Could Jeremy Langford?s job be in peril? It sounds like Delton Williams and Gerald Holmes will get opportunities with weekend. This will be fascinating. In the long run, I guess I?d be surprised if Langford was unseated. The guy is a proven commodity. With Big Ten play about to start, now isn?t the time to experiment. There?s a Big Ten championship to be won.

Meanwhile, it seems Brady Hoke was not pleased with boos he heard prior to halftime last week with his team up just 17-10 vs. a Miami (Ohio) squad that was riding an 18-game losing skid. Hoke only hopes the boss were directed at him and his staff-and not the players. Yes, it has come to this in Ann Arbor. The good news: A win against visiting Utah this Saturday will cure a lot of things.

Hokes was on "Big Ten & Beyond" this week. Watch his appearance here.

Ohio State is looking to continue to develop and cultivate playmakers around redshirt freshman quarterback J.T. Barrett. And it sounds like H-back Jalin Marshall is coming on as one of those playmakers.

"When he does go as hard as he can, he's really good," OSU coach Urban Meyer said. "I finally saw that last week where he put his foot in the ground."

And it looks like Barrett may have a favorite target in Michael Thomas. Thomas' 11 receptions, 214 receiving yards and four receiving touchdowns are all team-highs. Twenty-five percent of Barrett's 44 completions have ended up in Thomas' hands, according to Cleveland.com.

"We hold each other accountable," Thomas said. "I trust him and tell him I always have his back out there, and he trusts me."

I have a feeling that in a month, this offense is gonna be pretty gosh darn good.

Aside from searching for its offense this Saturday at Pitt, Iowa must play the first half without safety Jordan Lomax. He must sit out the result of a targeting penalty. Anthony Gair must step up. The defense will be OK.

If you didn?t see the photo of Rutgers DE Kemoko Turay blocking that field goal vs. Penn State, you should. Even he was surprised by his elevation.

"That's crazy," safety Davon Jacobs said. "That guy is gifted. He's talented. I kind of like to have him on my team."

Turay is a 6-6, 235-pound freak who played just one year of prep football. He?s just a redshirt freshman who looks primed to be a star.

The gang at InsideNU.com thinks Northwestern will be just fine thanks to the fact it plays in a conference that, well, isn?t excelling.

Perhaps. But unless the Wildcats get their offense figured out, even wins in the struggling Big Ten will be difficult to come by. Yes, NU should beat FCS Western Illinois this Saturday. But can you find five more wins on this schedule to make Northwestern bowl eligible?

With the loss of Jared Abbrederis, Wisconsin was in search of a go-to wideout. Well, it may have found one in Alex Erickson. Not bad for a former walk-on.

The fact Erickson had spent no time at wideout before arriving at Wisconsin makes his ascension all the more remarkable. He was an all-conference quarterback at Darlington High, according to Fox Sports Wisconsin. But when he came to Wisconsin, Erickson knew his quarterbacking days were over and opted to move to receiver.

Purdue will get a boost along the offensive line this week with the addition of left tackle David Hedelin. He?s a JC transfer from Sweden-yes, Sweden-who will bring an aggressive persona and edge to the field. Hedelin won?t start, but it?s probably just a matter of time before he is the team?s top blocker. Good video of Boilermakers line coach Jim Bridge talking about Hedelin.

Lots to like about Minnesota?s defense, headed by LB Damien Wilson. The guy is a pro. But Wilson needs to get his unit back up after a rough outing at TCU. I wonder if the offensive struggles of the Gophers are impacting the psyche of the defense.