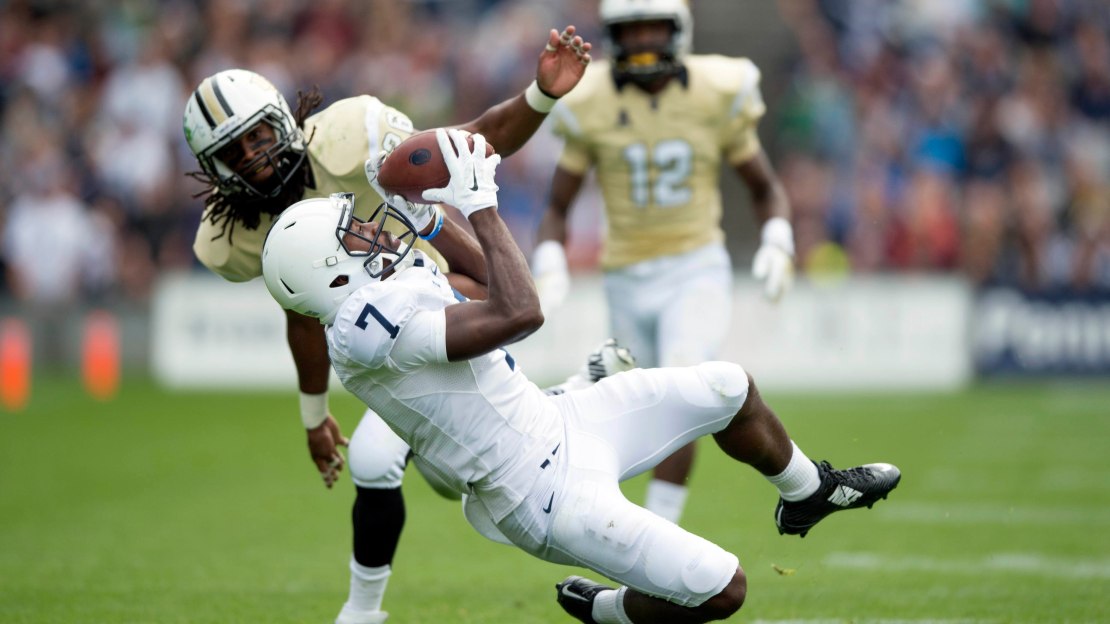 No matter what way you try to slice it, the Big Ten hasn?t measured up this season in non-conference action. But I didn?t realize it was this bad: The conference has beaten just two FBS teams that have winning records.

Brendan Quinn of Mlive.com notes that three weeks and 38 total games into the 2014 season, the conference is 2-12 against non-league FBS teams that are over .500. The victories: Vs. Navy and Middle Tennessee State. All told, the Big Ten is 24-14 overall, the worst mark among the power conferences. By comparison, the SEC is 32-7 overall, including a 19-1 record from the SEC West Division. The Big Ten West is 11-8.

Along those lines, Doug Lesmerises of Cleveland.com has tried to rank the top 10 Big Ten losses. Yes, losses.

Mike Griffith of Mlive.com says the 2014 Spartans have yet to measure up to the 2013 team. Well, the season is just two games long for Michigan State so far. Give it time.

We won?t learn much about MSU this weekend when it plays host to Eastern Michigan. The Spartans are a 45-point favorite, the largest in at least 20 years.

We all know the Penn State offensive line will take time to improve. Frankly, I am surprised the unit has played as well as it has thus far. Credit o-line coach Herb Hand.

David Jones of Pennlive.com says time is on the side of this still-under-construction line. Next five weeks on the schedule: Massachusetts, Northwestern, bye, @Michigan, bye. You couldn't map it out any better for Hand and his troops. No terribly forbidding defensive fronts.

After that ugly loss at Bowling Green, David Woods of IndyStar.com wonders if there is dissension among the Indiana troops.

This is when Indiana?s leaders need to step up and keep morale as high as possible. The season already may be at a crossroads. It would help if the defense improved. There was hope for coordinator Brian Knorr and his 3-4 scheme, but this was an unmitigated disaster at Bowling Green.

Minnesota took a big step back with its 30-7 loss at TCU. This was supposed to be a measuring stick game for the Golden Gophers. Well, they didn?t measure up. At all. In any way, shape or form. Is this team really primed to take the proverbial next step this season? Doubts have to creeping in.

To make matters worse, QB Mitch Leidner got banged up and Jerry Kill isn?t sure if he?ll play vs. San Jose State this week.

Count the great Mike Hlas of the Cedar Rapids Gazette among those offended by the Iowa offense.

On its home turf against Ball State and Iowa State, Iowa scored 17 points twice. It had 275 total yards against the Cyclones, a team that had been allowing an average of 267 yards of rushing alone. Some think Iowa needs to give backup QB C.J. Beathard time, as he has a better arm than Jake Rudock. The inability of Rudock to throw effectively down field has allowed defenses to creep to the line and focus on stopping the Hawkeye ground game. Beathard?s stronger arm may open things up.

Darrell Hazell took away many positives from Purdue?s loss to Notre Dame, especially on the defensive side of the ball.

"Really the thing I saw out of our defense is they played physical. I thought our linebacker play was as good since I've been here," Hazell said Monday to reporters. "I thought Sean (Robinson) and Ja'Whaun (Bentley) both came downhill and made the ball go sideways in the run game. If we can get those guys to play the way they did physically, they did a lot of nice things. I saw Ja'Whaun shoot a gap down on the goal line, almost got a safety."

Now, can Purdue carry this effort and performance over from week to week? That?s the vexing question. This team showed it can play pretty well when motivated, focused and dialed in. This has to give staffers hope.