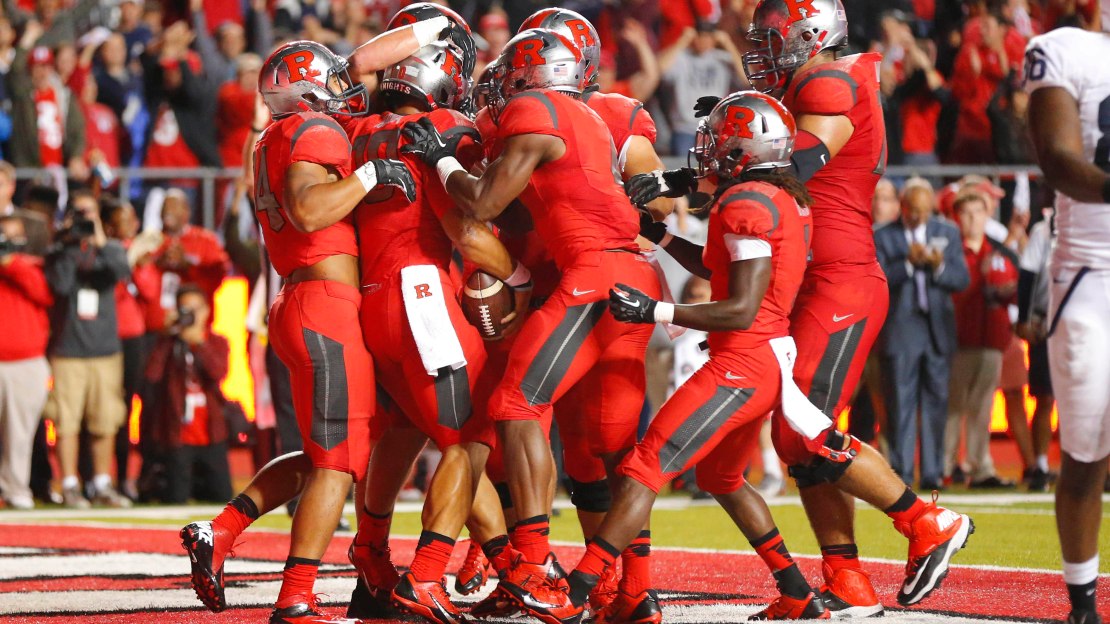 Tough loss for Rutgers on Saturday night. The program had invested so much emotion and energy into beating Penn State in its first Big Ten game. Alas, the Scarlet Knights lost a last-second heartbreaker.

A big issue for RU was the play of QB Gary Nova, who had five interceptions. Steve Politi thinks Kyle Flood risks losing the team if Nova continues to start.

With the way the Rutgers defense was playing, that victory was there for the taking. Nova didn't have to be excellent. He didn't even have to be good. He needed to make a few solid throws at key times. And he couldn't do it, noted Politi.

?We didn't get enough first downs,? said Nova. ?We didn't sustain drives well. I didn't do a good enough job taking care of the ball. I just didn't play winning football today. I need to make better decisions and not just force the ball down the field. I turned the ball over five times, and when you do that, you can't win the game.?

I think it?s too early to bail on Nova. He played a good team. And he did play well the first two weeks. It?s too soon to give him the hook.

Penn State is rolling with a 3-0 mark, but the Nittany Lions had to fight and overcome a lot to win at Rutgers. Bill Belton talks in this video about quelling all of the banter about the rising Scarlet Knights. Penn State isn?t going anywhere. This win helped show that. Now, the Nittany Lions are a legit player in the East Division.

There was no stopping the pass-catch duo of Christian Hackenberg and Geno Lewis. They did what Rutgers couldn?t: deliver big plays in the passing game.

The Iowa offense continues to confound. What has happened? Why can?t the Hawkeyes run the ball?

How bad was it in the loss to Iowa State? Iowa had just 102 yards of total offense in the second half. The Hawkeyes rushing attack wasn?t supposed to be an issue. Now, it is. And the season could be hanging in the balance.

Rick Brown of HawkeyeCentral.com notes that Iowa?s next foe, Pitt, is 3-0 with a star running back in James Conner. He's averaging 181.3 rushing yards. The Panthers as a team are averaging 344.3. Stopping the run is Iowa's strong suit so far, allowing just 65.7 yards. But Pittsburgh's defense is allowing just 77.3 rushing yards. It's time for the Hawkeyes' running game to show up.

Three games into 2014, and Michigan remains the ultimate work in progress. One of the biggest things to watch is QB Devin Gardner, who leads an offense that has seven turnovers in the last two games.

Gardner has four interceptions. Nick Baumgardner on Mlive.com says Gardner still doesn't look completely comfortable in the pocket within new OC Doug Nussmeier's system and, what was worse at times in the second half, Michigan didn't seem all that comfortable letting him throw it either.

"We're really concerned (with that)," Michigan coach Brady Hoke said. "Seven in three games … One in three games you don't want. It's ball security issues that we have to do a better job with from top to bottom."

I wonder is Shane Morris ever will be given a chance.

Illinois had a great chance to score an impressive victory at Washington after a 2-0 start. Instead, the Fighting Illini got trumped. Now, what?

Is this team better than last year?s club that won one Big Ten game? I still think it is. The offense is better with QB Wes Lunt, but the ground game needs some teeth. And the defense needs to make more plays in the front seven.

Speaking of bad losses, that?s exactly what Indiana suffered at Bowling Green, which was playing a quarterback who was making just his second career start. The Hoosiers defense looks still to have issues. Big issues. How bad was it? BG ran 113 plays, just two off the FBS single-game record. IU also had 143 yards in penalties.

The loss means Indiana has work to do if it wants to make its first bowl since 2007.

Said Kevin Wilson: "We're going to have a good year."

IU sure did. And, it may prove to be very costly.

Yes, Ohio State wiped out Kent State. But are the Buckeyes good enough to win the Big Ten? I guess I have my doubts, even though the Big Ten apparently isn?t loaded with great teams. Still, to win the Big Ten, the Buckeyes likely will have to beat Michigan State in East Lansing. And I don?t see that happening. Check out this video on the subject from Cleveland.com.

I still want to see this defense perform well vs. a team that can pass. And can J.T. Barrett deliver big plays and a big performance vs. a quality foe?

Northwestern is 0-2 and had a bye last week. Here?s why that was important.

If I was NU, however, I would have preferred to have played this last week instead of being idle. Better to get back on the field than think about it.