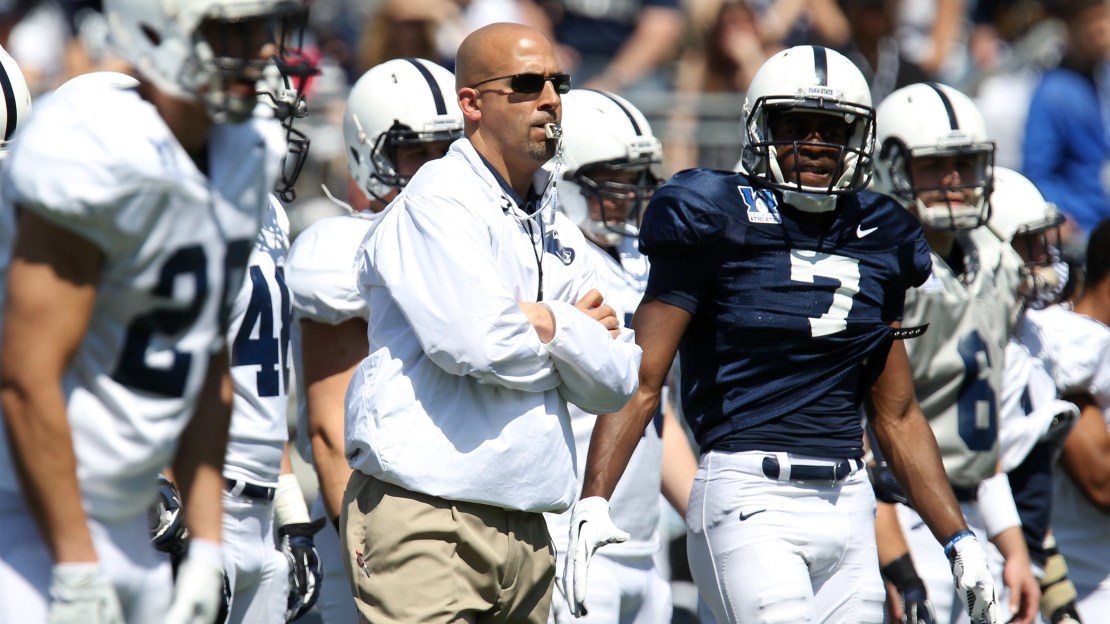 Penn State has had its scholarships restored to 85 beginning in 2015, but James Franklin won?t alter his approach to redshirting. If young guys can play, they will. At least for now.

"I always make the argument where are they going to be best, as a true freshman or as a redshirt senior?" Franklin said. "That's what you're really trying to factor in. Right now from a depth perspective we don't really have that luxury. … On the same hand throwing guys out there who aren't ready yet doesn't make sense either."

A win by Rutgers over Penn State this Saturday night no doubt would speed up the development of the Scarlet Knights program. At least that?s what BTN?s Gerry DiNardo thinks. And, I agree.

Adding to the positive mojo was yesterday?s announcement that Kyle Flood is being given a raise and two-year extension. Nice timing!

With Penn State?s most punitive NCAA sanctions repealed, it suddenly becomes a factor in the Big Ten East. And the Nittany Lions? rivalry with Michigan State now has some added juice.

?It intensifies it, certainly,? MSU coach Mark Dantonio said Wednesday on SiriusXM. ?I think you always want to play for something, I?m sure it?s very difficult if you?re Penn State to just play and at the end of the year you say ?Well, what do we get after these wins and losses??

I wonder if PSU is the second-best team in the Big Ten East. Oh-by-the-way: MSU finishes the season with a road game at Penn State. Interesting, huh?

It is good to be a freshman at Minnesota. Check this out: Eight true freshmen already have played this season, compared to just four all last year.

At one point in last Saturday's 35-24 win against Middle Tennessee State, Minnesota had six true freshmen play defense at the same time. Injuries have hit the defense hard, as you can tell. These guys need to keep growing up fast.

Brady Hoke says he thinks the offensive line is improving despite tackles for loss numbers that say otherwise.

The Wolverines have allowed 14 tackles for loss through the first two games of the season, notes Nick Baumgardner of Mlive.com. Michigan ranks No. 106 nationally in that category. The only Big Ten team to allow more is Ohio State — who has allowed 16.

The sack numbers aren't as bad — just four — though quarterback Devin Gardner did deal with a good bit of pressure Saturday night in a loss at Notre Dame. Hoke seems to be content — for now — in sticking with the same starting five that lined up last week: True freshman Mason Cole at left tackle, sophomore Erik Magnuson at left guard, junior Jack Miller at center, junior Graham Glasgow at right guard and sophomore Ben Braden at right tackle.

With the Big Ten?s big flop last Saturday, the questions again are being asked: Amid shifting demographics, can the Big Ten rise again?

If you study demographics, it's no wonder this is happening. It's not about the coaching failures of a Brady Hoke or a Bo Pelini, it's about our changing landscape as a country. Gary Laney notes in his story that the center of our nation's population, and the middle of its football universe, has now been taken over by the mighty SEC. It's interesting to note that over time, as the nation's population center shifted steadily south and west, it seemed football started to be dominated more by teams from those regions. The question is, will it ever move back to the Heartland?

Anyone else wonder what would happen if Ohio State was playing MAC power Northern Illinois this Saturday instead of MAC second-tier team Kent State?

This was an interesting story from InsideNU.com, asking the question: How many wins should Northwestern average? I think this team should be in the six-win average each season with the momentum that Pat Fitzgerald has been able to build.

The great Scott Dochterman of the Cedar Rapids Gazette has four myths about the Cy-Hawk series.

This is one of the most underrates rivalries in the nation. And, I love it. But Iowa needs to get back on top. Kirk Ferentz is just 7-8 vs. ISU. In fact, Iowa State has found a way to pace this rivalry, going 9-7 in the last 16 meetings after Iowa ripped off 15 wins in a row in the Cy-Hawk Series from 1983-97.

Hardee was never supposed to be a wide receiver at Illinois. He was going to be a defensive back at Toledo, closer to his home in Cleveland where his mother had suffered for years with a lung disease that required her to use a breathing machine. It was Tim Beckman who offered Hardee a scholarship when he attended the Toledo camp as a senior at Glenville High School, and it was Beckman who left Toledo not long after that to take the head coaching job at Illinois. Now, they are helping each other.