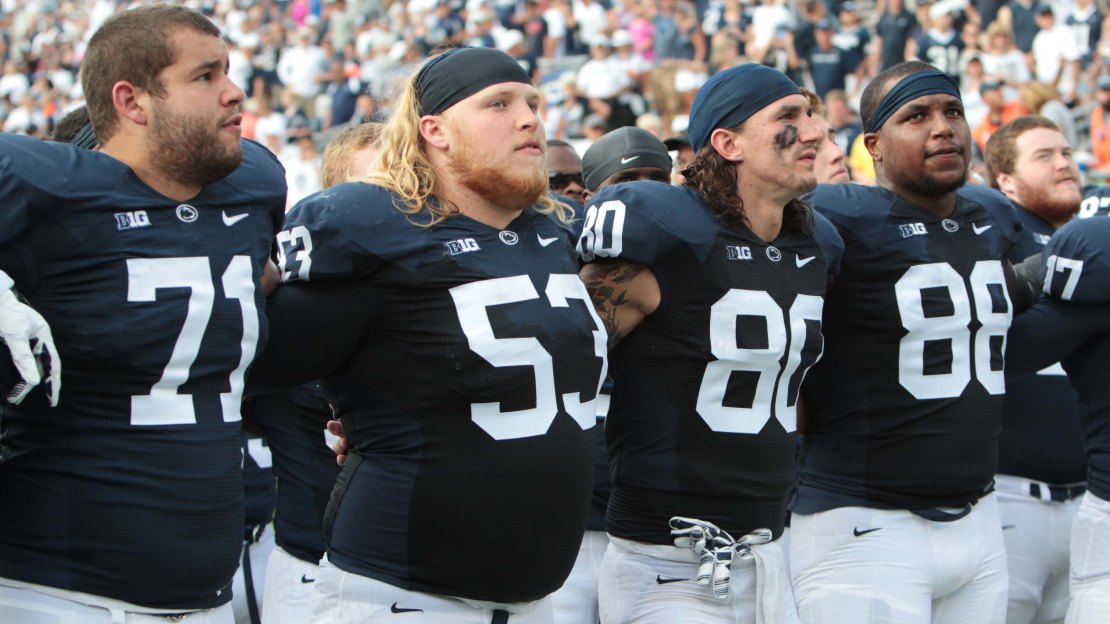 The season is just two weeks old, but it already has had some bizarre twists for the Big Ten. Who has surprised coming out of the gate? Who has disappointed?

1. Rutgers. The Scarlet Knights are off to a 2-0 start. And they have looked pretty good doing it. I didn?t think Rutgers would win vs. Washington State in Seattle in the opener. But RU made big plays-special teams turnover, late game-winning score–down the stretch to pull out the victory. That showed me a lot. Now comes a visit from Penn State in one of the biggest games in the last quarter century for Rutgers. Beat the Nittany Lions, and the Scarlet Knights may be 5-0 with Michigan coming to New Brunswick on Oct. 4. (A trip to Navy and visit from Tulane follow the PSU tilt.)

"I think for the players, it's a game that a lot of people around them have wanted to talk about and really the time wasn't right to talk about it because we weren't playing that game," Rutgers coach Kyle Flood said. "So now it's an opportunity to start conference play. It's an opportunity for us to be 1-0 in the Big Ten Eastern Division."

It?s a whole lot more than that, really. A win could be an impetus for the program moving forward in a battle for Eastern recruiting turf.

2. Penn State. I thought a 2-0 start was possible. But I didn?t think it would happen. Well, I was wrong. The Nittany Lions showed lots of moxie in rallying late to beat UCF in the opener in Ireland. They the Nittant Lions methodically dumped Akron last week. Now comes a huge game at Rutgers. Win that, and Penn State may take a 5-0 record to Michigan on Oct. 11 with home games vs. UMass and Northwestern following the trip to Rutgers. If the o-line stays healthy and continues to develop and improve a soft rushing attack-it is 117th in the nation–Penn State could be a team to watch in the East.

3. Illinois. No, it?s not a huge shock to see the Fighting Illini at 2-0. But it has been impressive to see the team show some resiliency by fighting back in the fourth quarter of the first two games to pull out wins. Yes, the games were vs. FCS Youngstown State and Western Kentucky. Still, this was a step in the maturation of the program under Tim Beckman, who is in his third year. And how about Wes Lunt? Is there a better quarterback in the Big Ten? Nope. He will keep Illinois in most every game it plays this year. You want clutch? Check this out: In the fourth quarter in 2014, Lunt is 19-for-22 passing for 309 yards and four touchdowns for a passing efficiency of 264.34. Now comes a huge trip to Washington. Win that, and the Illini can start to dream a bit.

1. Michigan. I thought the Wolverines had a good chance to be 2-0 at this point. Did I think Michigan could or would lose at Notre Dame? Yes, it obviously was a possibility. But I didn?t see the Wolverines falling, 31-0, the program?s first shutout since 1984. Just two weeks into the season, and Michigan looks like it already may be at a crossroads. Many of the issues that nagged as 2013 ended appear still to be nagging as we wade deeper in 2014.

"The attitude of your team, whether you're winning them all or going through a tough stretch, the attitude of your team (has to be positive) and it has to come from everybody in the building," Brady Hoke told reporters earlier this week. "We're a good football team. They learned some lessons (at Notre Dame), but every day you can see (progress)."

2. Northwestern. First, the Wildcats looked flat in the opener vs. Cal, falling behind, 31-7, before a late rally fell short in a 31-24 home defeat. Then came a humbling 23-15 loss in Evanston to Northern Illinois. That spurred Northwestern coach Pat Fitzgerald to refer to his team as an ?embarrassment? and also characterize it as not ?very tough.? This isn?t good. Since opening 4-0 last season, the Wildcats have gone 1-9. Among other things, an anemic rushing attack that ranks 116th in the nation is an issue. Now, you wonder about the chemistry and mind-set of the team, in addition to any physical shortcomings. Northwestern is off this week and then plays host to FCS Western Illinois. The Wildcats open Big Ten play with a 1-2 punch of at Penn State and vs. Wisconsin. Go ahead and swallow hard, Willie.

3. Iowa. Yes, the Hawkeyes are 2-0. But, it?s an ugly 2-0. In fact, they very easily could be 0-2. And this is the team I have picked to win the Big Ten West. The issue has been an offense that inexplicably can?t run the football. Despite opening vs. FCS Northern Iowa and Ball State from the MAC, the Hawkeyes are 97th in the nation in rushing. How bad is it? Quarterback Jake Rudock is the team?s top rusher. And now, top tackle Brandon Scherff may miss time with an injury. This is a program built on a tough ground game. Unless Iowa gets in gear with its rushing attack, it figures to struggle.

"We think it is an absolutely correctable thing," said right tackle Andrew Donnal after practice this week. "It comes down to a lot of small details. We're not getting it done with fundamentals, or we're not executing the play properly. It could be one person. Or it could be all five across the front. It could be anyone on the field, of the 11 guys."